The ECB cuts interest rates: the right move or too early?

At its meeting in November, the Governing Council of the European Central Bank (ECB) agreed to lower official interest rates to 0.25%, contrary to the predictions of the vast majority of analysts who did not expect an interest rate cut. So the refi rate is now 0.25%, a new all-time low. The interest rate for the marginal credit facility was also cut by the same amount, down to 0.75%, while the deposit facility rate remained unchanged at 0.0%. The institution once again repeated that the ECB's official rates will «remain at current or lower levels for an extended period of time».

The decision adopted by Europe's monetary authority is largely due to the recent inflation figures observed in the euro area. The growth in prices in the eurozone as a whole came as a surprise, standing at 0.7% year-on-year in October, markedly below forecasts and far from the long-term inflation target set by the central bank, namely below but close to 2%. Mario Draghi himself stated that «we may experience a prolonged period of low inflation, to be followed by a gradual upward movement». Nonetheless, the monetary authority does not expect widespread deflation and pointed out that inflation expectations «over the medium to long term continue to be firmly anchored». Although unlimited fixed rate auctions have been prolonged for another year, up to mid-2015, via main refinancing operations (MROs) maturing weekly, monthly and quarterly (LTROs), some analysts believe that any additional monetary stimuli will be introduced via more extensive non-standard measures: a very long-term liquidity tender (LTRO), forcing the deposit facility interest rate into negative terrain, or the partial sterilisation of the assets purchased by the ECB as a result of strong tensions appearing in periphery debt markets in 2010.

Beyond the technical details inherent in the decision itself, this interest rate cut has also led to wide-ranging opinions between those for and against the move, although the consensus believes that the measure has been opportune and correct. On the one hand, and in the current context of incipient recovery in activity in the euro area, the ECB's aim has been to prepare the ground for any risks that might be involved, for the still tenuous recovery, of inflation rates that are too far from their long-term target. On the other hand, the decision to resort to interest rate cuts endorses the institution's commitment to its forward guidance, started in July. However, those against the measure point out that the ECB might have moved too early. Firstly, they argue that October's inflation figures may not be relevant enough per se and that it would have been advisable to wait for more complete information on this area, which will be published in December. Secondly, as official interest rates are so close to zero, both the margin and the effectiveness afforded by standard monetary policy have almost run out, so that the decision to resort to such an alternative is not inconsequential.

Although the ECB stated that it has «additional artillery» if necessary, it is true that the implementation of new measures such as bond purchases entail complex derived policies as they might exceed the ECB's single mandate of price stability. Whatever the case, the institution must take particular care with its communication policy
to ensure agent expectations are correctly formed. 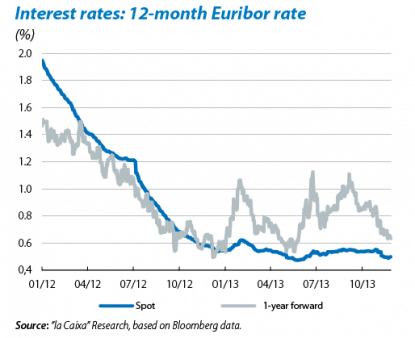 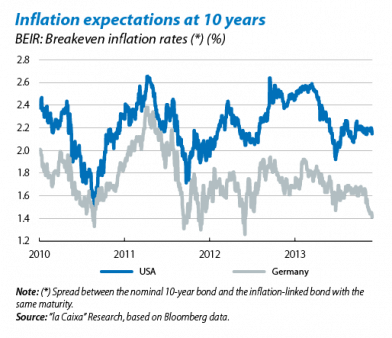