According to our forecasts, Brazil will grow by 2.5% in 2014, a tenuous improvement compared with the 2.3% estimated for 2013. This is a surprisingly weak revival in activity considering that the world economy will clearly improve in 2014 while events favouring growth will be occurring in the country, such as the Football World Cup (June-July) and the presidential and legislative elections in October. If, moreover, we also add that the country is preparing for another great investment milestone, namely the 2016 Olympic Games, then doubt grows regarding this meagre improvement in the Brazilian economy.

One initial conventional answer is that Brazil's growth potential is more limited than that of other emerging countries due to supply restrictions. Certainly this factor explains why the long-term growth predicted is relatively subdued (in the order of 3% for 2014-2020 compared with 4.3% for the large emerging economies as a whole). However, in cyclical terms the determining factors are of a different nature.

Two developments affect the situation in Brazil; one of a positive nature and the other with negative implications. The first is the ongoing organisation of two large events (the World Cup and Olympic Games) with their associated infrastructure projects. The second, the presence of different macroeconomic imbalances, in particular a relatively high current deficit (within the context of the emerging economies) and inflation anchored at high levels (5.9% year-on-year in December). These weaknesses lie behind the considerable financial tensions and depreciatory pressure on its currency (the real depreciated by 13% against the dollar in 2013) which have been evident since last May when the Fed started to announce its tapering plans. The central bank has also responded to this combination of the real's depreciation and inflationary pressures by raising the interest rate from 7.25% in April 2013 to 10.5% this year.

In terms of the composition of growth, 2013 stood out for the sharp rise in investment (up 8% year-on-year), offsetting both the slowdown in private consumption (hindered by entrenched high inflation) and the foreign sector's negative contribution. This last aspect results from the combination of a marked rise in imports, which are fuelling investment demand, but also from a moderate acceleration in exports. Based on this situation, for 2014 we expect little room for improvement in the area of private consumption given the continuing situation of high inflation and the stability of the unemployment rate. The situation of public consumption will be more expansionary as this tends to speed up in election years, although the public deficit is under control for the moment. In short, most of the action will remain in the hands of two components: investment and the foreign sector. Although public investment will probably maintain its rate to a large extent, we do not expect any great changes in the area of private investment, worryingly entrenched in an underlying trend of poor economic performance. With regard to exports, we predict a substantial reduction in their negative contribution to growth, recovering some of the energy absent in previous years, benefitted at the same time by considerable cumulative depreciation in the real and the reasonably positive outlook for its main trading partners (China and the United States, which account for 30% of Brazil's exports). Similarly, the weaker push from investment will result in more subdued growth in imports. 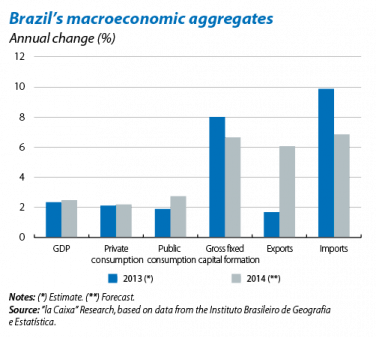 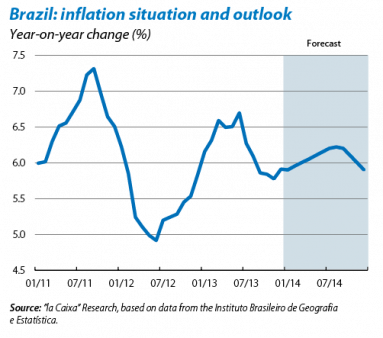