The securitisation market: from hero to villain, and vice versa

The European Central Bank (ECB) and the Bank of England (BoE) have recently published a joint paper calling for the revitalisation of the Europe's securitisation market. Initially, it might be surprising that two of the leading guardians of international financial stability should come out in defence of an instrument almost unanimously considered to be a partner in crime in the huge financial crisis that erupted in 2007. But first impressions are misleading: what the ECB and the BoE are proposing is to strengthen the «good» types of securitisation at the same time as getting rid of the «harmful» variants.

The distinctive feature of bank securitisation is that it allows the originator (the bank) to turn illiquid, high risk assets (such as mortgages, SME and consumer loans, etc.) into liquid assets by selling them to a third party (usually an asset securitisation fund promoted by the bank itself). In turn, this fund issues debt (securitised bonds) of varying credit quality to finance the acquisition of the underlying assets in question (which become the collateral for the bonds). In this way, the bank gets rid of its securitised portfolio and achieves three goals: it obtains liquidity, diversifies its sources of funding and passes on the risk inherent in the assets. The ECB and BoE seem convinced that releasing these resources from banks' balance sheets (liquidity and capital) would help to increase the supply of new credit, especially for SMEs. But securitisation has almost come to a complete stop in Europe at present. This is largely due to the stigma attached to it since the 2007 crisis, when the subprime mortgage fiasco in the US revealed the huge risk involved in formulas for repooling bank loans that are too opaque, complex and precarious. The ECB and the BoE therefore endorse the need to act in two broad areas: improve transparency and appropriately align the incentives for the different participants in this market. They also point out the usefulness of revising some technical aspects in the regulations regarding the capital and liquidity requirements for banks and insurance companies to make securitisation more attractive, both in terms of supply and demand.

But, as is bound to be the case, perhaps the most revolutionary action has been left out of the aforementioned document: direct intervention by the ECB in the securitisation market, giving it a wake-up call to shake it out of its deep lethargy. For several months now there has been talk of the ECB possibly including asset purchases among its stimulus measures, either of sovereign or corporate bonds or ABS (asset-backed securities: securitised bonds for bank loans other than mortgage-backed securities, especially loans to SMEs). From a statutory point of view, buying up ABS is one of the least controversial options for the ECB and could be adopted at its next meeting in June. However, there are limitations and doubts regarding both its implementation and to what extent it is capable of revitalising credit. Firstly, the modest size of Europe's securitisation market: at the end of 2013, the total outstanding balance for securitised operations was 1.54 trillion euros, of which only 8.5% correspond to ABS backed by SME loans. This is a small volume compared with markets such as that of corporate bonds or sovereign debt. Secondly, and related to the first point, the design of any ABS purchase programme faces a dilemma: whether to acquire newly originated securities (primary market) or already existing securitised debt (secondary market). The first option would have more impact on the credit being offered to firms but the second would be faster. Another important aspect is related to the level of risk the ECB is prepared to take on, given that the programme's impact would critically depend on the effective capacity of originators to pass on the risk of the underlying assets from their portfolio to the ECB. To achieve this, the ECB would have to extend the purchase of senior tranches (with a high credit rating) to those with a higher risk (including mezzanine tranches and equity), a delicate aspect at the very least. Although one alternative that would considerably reduce the assumption of credit risk by the ECB would be for the European Investment Bank to provide guarantees for bank securitised debt.

In short, the aim of revitalising the «high quality» securitisation market looks like being a huge challenge. Regulatory measures and those aimed at improving transparency could undoubtedly be of great help. But direct intervention by the ECB raises doubts. 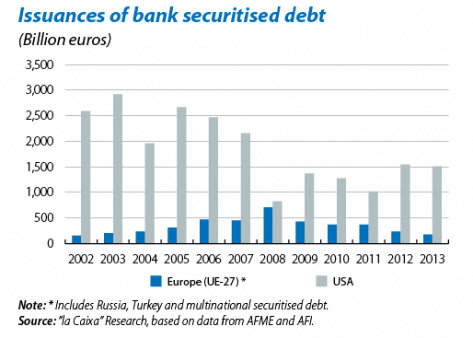 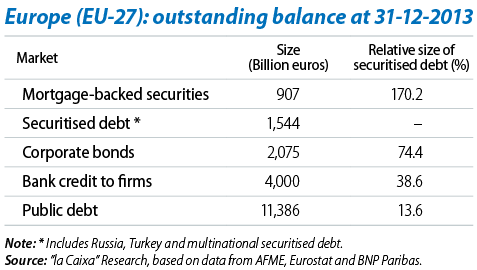