The recent economic crisis has highlighted the fragility of Spain's pension system. To give a recent example, last year the Social Security deficit rose to 1.2% of GDP. This imbalance forced the government to use part of the resources built up in the Reserve Fund during the surplus years in the first decade of the century. Specifically, since 2012, 18.7 billion euros have been used, a figure similar to the contributions made between 2007 and 2009.

This deterioration in the Social Security accounts is basically due to two factors of a different nature. The first is cyclical: the extensive economic crisis over the last few years has significantly affected Spain's labour market, reducing the number of registered workers affiliated to Social Security by just over 3 million between 2008 and 2013, down to 16.4 million. As a result, the system has seen a 10% reduction in its revenue from Social Security contributions. The second factor to take into account is more of a structural nature, associated with Spain's population getting steadily older. In the last five years the number of pensioners has grown by 9.6%, particularly boosted by the sharp increase in the number of retirees (12.8%) who, at 5.4 million, already account for 65% of all Social Security beneficiaries.

The combination of both these factors has reduced the number of contributors to receivers in the pension system from 2.6 in 2007 to just under 2 in April 2014. The long-term outlook is not encouraging either. In spite of the expected recovery in the labour market over the next few years, an EC report predicts that, without reforms, the number of Social Security contributors for each retiree could fall to 1.3 by 2060, an unsustainable figure whichever way you look at it.1

A further factor pressurising Social Security expenditure has been the progressive increase in the average size of pensions. From 2008 to 2013 this increased by 19.0% (20.3% if we only take retirement pensions into account). A large part of this increase is due to the higher amount paid for new pensions which, between 2010 and 2013, were 28.0% larger than the old pensions being cancelled. This phenomenon explains why, in spite of the small increase applied to pensions for 2014 (0.25%), their average value between January and April is 1.8% higher than the value in 2013.

Given these figures, the reform announced in 2013 represents an important step forward in ensuring the pension system can be maintained in the long term; a guarantee that would be reinforced by further advances in labour market efficiency and productivity in the economy. 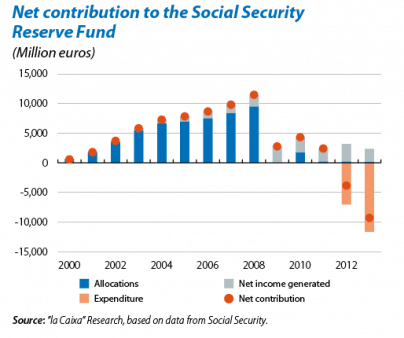 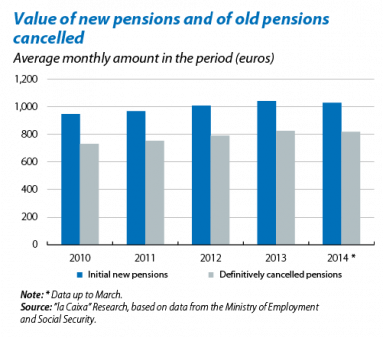