Mexico: the first positive results from its structural reforms

Mexico approved six structural reforms between November 2012 and December 2013: affecting labour, education, telecommunications, finance, energy and the fiscal area. Each one of these is substantial in its own right but, taken as a whole, they represent the biggest reform carried out by the country in decades. The fundamental reason for this ambitious agenda of reforms is the need to improve the growth potential of Mexico's economy, which the IMF places between 2.8% and 3.0%, at the tail end of Latin American countries. According to available estimates, should this package of reforms be applied properly it will help to boost the country's growth potential by up to 3.5%-4.0%.1

So are these reforms on the way to bringing about the important results they promise? There was a time when some thought the reforms might be put on the back boiler, slowing down the process to pass the necessary laws or failing to apply them. For the time being, however, none of these risks has materialised. The laws had already been passed by the end of 2014 and as far as the next step is concerned, namely their implementation, this also seems to be progressing satisfactorily. To give some significant examples, in education the first exercise has been carried out to evaluate teachers prior to their recruitment (breaking with the tradition of teaching graduates being given a job automatically); in the area of telecommunications, licences for two openly available national channels are in the process of being put to tender; lastly, in the financial sector, a new mechanism has already been implemented to dissolve Banco Bicentenario. Although a small bank (it accounts for just 0.015% of all assets in Mexico's banking system), what is relevant is the application of this new resolution mechanism.

But it is the energy reform that has aroused most expectation due to its potentially huge impact, a process which is also making good headway. It should be noted that the main aim of the energy reform is to increase oil production by exploiting reserves that are difficult to access, requiring the incorporation of technology and investment from the private sector (the previous constitutional framework limited private involvement). In this respect, PEMEX has already announced ten projects it will carry out in collaboration with the private sector during the period 2015-2020. This state-owned oil company will also adapt its current contracts to the new framework to generate new investment. Lastly, the private sector has also announced its willingness to take advantage of the new forms of participation offered by the reform. Thanks to this investment, encouraged by the reform, in 2020 investment in the oil industry could be 65% higher in real terms than the figure recorded in 2014: compared with 27.4 billion dollars in 2014, investment could reach 45.2 billion dollars (in real terms) in 2020. Without the reform, this increase would have only been 27% (from the aforementioned 27.4 billion dollars in 2014 to 35 billion dollars).2

It should also be noted that the reforms will be implemented within a context of a temporary upswing in growth (growth will exceed 3.5% in the period 2015-2016) thanks to the expansion of the United States and to contained macroeconomic imbalances. In spite of this positive situation, however, we must not forget that, as mentioned above, any improvement in long-term prospects depends on the success of the agenda of reforms. Particularly if we take into account the fact that the challenges facing the country are not solely in the economic area. As Mexico's President, Peña Nieto, announced recently, the next effort must focus on improving aspects of governance and safety in the country, especially at a local level.

1. On the content and economic impact of the reforms, see «A reformist drive is shaking up Mexico», Monthly Report, January 2014, "la Caixa" Research and «Mexico: 2014 Article IV Consultation-Staff Report», IMF, November 2014. These analyses conclude that the fiscal and energy reforms will have the greatest impact on the country's potential GDP growth. 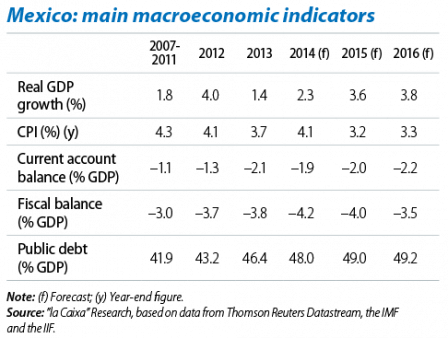 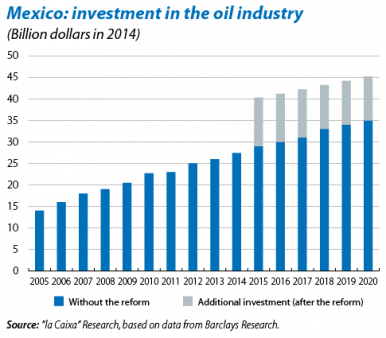