In October 2014, the largest pension fund in the world, the Japanese GPIF, announced a sharp reduction in its public debt portfolio and an increase in its exposure to equity. This decision illustrates the turnaround observed in the investment strategy of most insurance companies and pension funds given the scenario of very low interest rates. This factor, together with the regulatory changes affecting this kind of institutional investor, poses an enormous challenge. We must remember that the insurance and pension sectors have become huge over the last few decades (in 2013 the assets of pension funds alone accounted, in OECD countries, for 84% of GDP), and they therefore play a very important role in global financial stability.

Given the nature of their business, life insurance companies and pension funds typically have very long-term payment commitments and it is precisely this feature that can give rise, relatively easily, to mismatches between liabilities and assets in terms of duration and yield. The extent of these mismatches must be controlled and monitored very closely. According to the stress tests carried out by the European supervisor for the sector (EIOPA), in some companies liabilities have a duration (average maturity) and yield exceeding those of assets to an extent that makes them vulnerable, especially if the current scenario of low interest rates continues. In fact, these companies could find it difficult to reinvest in assets whose yield is high enough to cover the future commitments initially acquired. This would be the case of insurance institutions in countries in the lower left-hand section of the graph, especially Germany where the predominance of products with a guaranteed return makes it difficult to adapt to an environment with such low interest rates.

As has already been mentioned, the course of action being adopted by numerous institutional investors in order to reduce such gaps on their balance sheets is to increase the risk profile of their investments in a search for higher yields. Although no aggregate official data are available as yet for 2015, there are many indications that confirm this phenomenon. Perhaps the most notable is the increase in absolute terms and the relative share of equity investments by insurance companies and pension funds in the euro area, as detected by several sources; a trend that, given the stock market performances over the last few months, has continued in the beginning of 2015. Investment in real estate assets and infrastructures is also becoming increasingly common for the pension funds of the main advanced countries, at the same time as reducing the quality of their fixed income portfolio, increasing exposure to corporate or sovereign bonds with lower credit ratings (higher yields).

Nevertheless, in the medium term this turnaround in the strategy of institutional investors may be limited by the regulatory changes facing the sector. This is the case of insurance companies which, as from 2016, will have to adopt a new regulatory framework (Solvency II) that makes riskier investment positions more costly in terms of allowances. Although this regulation aims to reduce the insurance industry's exposure to market volatility, it might pose an additional problem when attempting to narrow the gap in yield observed in some countries. Given this situation, institutional investors are likely to opt for new strategies such as gradually reducing the products they offer with guaranteed returns and increasing the average life of investments, bringing them more in line with liabilities (and thereby reducing reinvestment risk).

In short, after successfully handling the financial crisis of 2007-2012, the pension and life insurance sector is now facing an enormous challenge: balancing more demanding regulations regarding the assumption of risk with a search for yield in a low interest rate scenario. This is undoubtedly a significant challenge that could result in the transformation of an industry that is hugely important, both in terms of the financial stability of markets and in its role as a supplier of basic services to manage consumer risk. 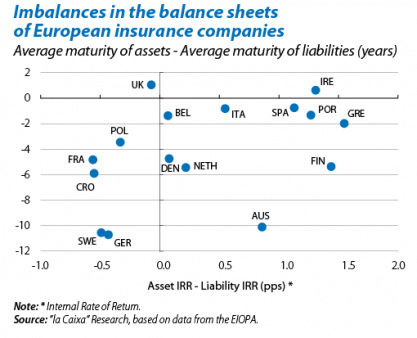