The deterioration in Brazil's outlook: a bad patch or something more deep-rooted?

At the end of 2014, the analysts' consensus forecasts said that Brazil would grow in the order of 1% in 2015. Just over three months later this figure has fallen to –0.8%. Various temporary factors are creating a growing perception of risk for this Latin American economy: the weakness in activity at the start of the year, the government's difficulty in achieving parliamentary support for its economy policy, citizen protests and current investigations into Petrobras. However, the country's problems go deeper: there is notable uncertainty regarding its ability to appreciably reduce its macroeconomic imbalances and tackle the structural reforms it requires.

Concerning the first of these challenges, the most pressing imbalances are inflation, the public deficit and the current account balance. In March the CPI grew by 8.1% year-on-year, higher than at year-end 2014 (6.4%). The main factors behind this rise in inflation are the impact of the real's depreciation and the fact that certain regulated prices are being raised. Some elements will continue to put pressure on prices in 2015: the real fell by approximately 17% against the dollar in 2015 Q1 and regulated prices will also rise this year, which could lead to more demonstrations in the streets. With regard to public accounts, between 2011 and 2013 the public deficit stood at around 3% of GDP but in 2014 it climbed to 6.3%. This deterioration was mainly due to an increase in expenditure (there were presidential elections last year in Brazil). Lastly, the current imbalance, which in 2011 accounted for –2.0% of GDP, has almost doubled (–3.9% of GDP in 2014) because of falling prices in the many commodities exported by the country (such as soya and iron ore). But apart from the extent of this imbalance, its financing is also a cause for concern: whereas, in 2011, foreign direct investment accounted for 12% of net inflows of capital in portfolio, in 2014 this ratio was 50%. This makes the economy much more vulnerable to any change in investor sentiment.

In such a situation, how much margin does economic policy have? Given the aforementioned imbalances and taking the weak real into account, we expect the central bank to maintain a restrictive monetary policy (we predict a rise of 100 bps this year, to 13.75%). A higher interest rate (albeit limited as this also affects growth), together with the country's comfortable level of reserves, are factors that could help to contain any episodes of financial stress on the real caused by the US Fed's interest rate hikes. Nonetheless a slight depreciation in real terms of Brazil's currency could help to improve the country's external competitiveness without jeopardising the sustainability of corporate bonds, whose dollar exposure is at a contained 5.5% of GDP.

The key element with regard to fiscal policy is a programme of adjustment that aims to achieve a primary surplus of 1.2% of GDP in 2015. Given that 2014 ended with a larger primary deficit than expected (–0.6%) and that tax revenue has fallen since the start of 2015, what had originally been seen as a necessary but viable programme has now become a huge challenge. This, together with the difficulties encountered by the government to secure the necessary parliamentary support, has led to uncertainty regarding its ability to substantially modify its economic policy.

Such doubts affect the second, more fundamental source of uncertainty: the commitment to carry out structural reforms. No-one disagrees that Brazil has good future prospects: its demographics are expansive, a notable middle class has been created over the last few years, its domestic market is considerable and the metropolitan area of São Paulo is among the most dynamic in all Latin America. Nevertheless, this potential cannot be realised without tackling two critical issues: a reduction in production bottlenecks (requiring better infrastructures) and a simpler business environment. According to the World Bank's Doing Business indicator, Brazil ranks 120th (out of 189) for business, too far from its regional benchmarks such as Mexico (28th) and Colombia (34th).

In short, Brazil is at the start of at least two years of macroeconomic adjustments that should help to redress its most serious imbalances. Otherwise, market pressure could become strong as the international macroeconomic and financial environment will be less favourable for the country with the Federal Reserve starting to raise its reference rate and its main trading partner, China, slowing down. 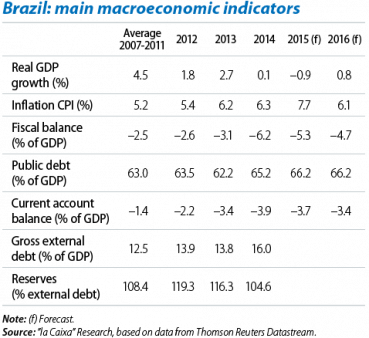