Overheating in the Chinese stock market: opportunity or threat?

The last few months have witnessed a dramatic rise in share prices on the Chinese stock market: in the last year the Shanghai stock market has gained 130% and the Shenzhen stock market 166%. The speed and circumstances surrounding these increases have set alarm bells ringing regarding the possible formation of a speculative bubble like the one that appeared in China between 2005 and 2007. There are indeed reasons to be concerned but, unlike the previous episode, the Chinese regulatory authorities are likely to successfully handle any potential risks  resulting from excessive investor euphoria. They have learned their lesson.

The first question that must be examined is whether there are signs of a bubble forming and, unfortunately, the evidence seems to point in this direction. First of all the impressive rise in China's mainland stock markets has been reinforced by soaring margin debt purchases, reaching an all-time high of 300 billion dollars. Another worrying sign is the rate of stock-trading accounts being opened to trade shares on the stock markets of Shanghai and Shenzhen. In April four million accounts were opened per week compared with the weekly average of 150,000 over the last five years. This type of account, 80%-90% held by small investors, shows that investing in stocks and shares is once again popular in the country. A third reason for concern comes from the underlying nature of this stock market rally: liquidity prevails over returns, at least at present. In fact, the stimuli measures adopted by the monetary authorities since mid-2014 have had a notable effect on boosting share prices. Paradoxically, the publication of weaker activity and sentiment data than expected in 2015 Q1 has further strengthened this rally, fuelling expectations of more accommodative monetary conditions. On the other hand the downward revisions in forecasts for corporate earnings by the consensus of analysts for 2015 and 2016 have not stopped these stock market gains. Consequently, the figures for China's stock markets have deteriorated considerably. In the last 12 months, the P/E ratios (price on earnings) of the Shanghai and the Shenzhen stock market have doubled to 21 and 60, respectively.

Does this mean that China's securities market is facing imminent correction? Not necessarily. In the 27 months prior to the stock market bubble bursting in October 2007, the Shanghai stock market index gained by 500% and reached a P/E ratio of 48. The figures for the current upward cycle are far from such achieving such heights: the Shanghai index is up by 120% since January 2014 and has a P/E ratio of 21, in line with the average since 2003. On a regulatory and macroprudential level, institutions such as the China Securities Depository and Clearing Corporation and China Securities Regulatory Commission (CSDC and CSRC respectively) have been somewhat ambivalent about this stock market exuberance. The Chinese authority is facing a complex, far-reaching dilemma. Aggressive intervention could result in strong financial turbulences with negative repercussions for the real economy, especially in a situation such as the present with growth slowing down and the real estate sector cooling off. In fact, the macroeconomic effects of the current stock market rally should not be underestimated. Ultimately the Chinese executive needs to adapt a selective, balanced approach in its actions to avoid jeopardising its targets for economic growth. 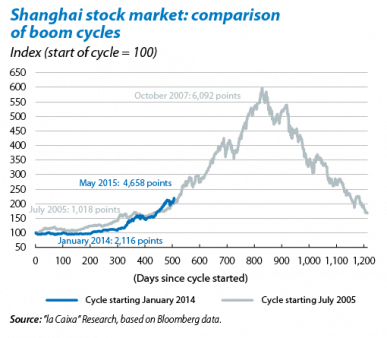 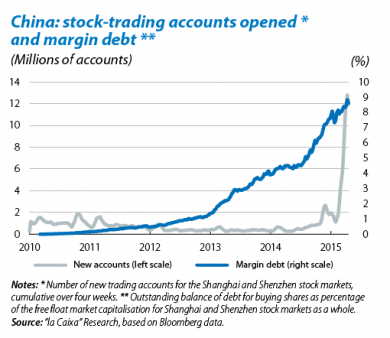