The financial situation of Spanish households is getting stronger

The strength of the Spanish economy's recovery is also improving financial situation of households, albeit gradually. One example of this is the notable rise in consumption, up by 3.5% year-on-year in 2015 Q1. In this Focus an analysis is provided of the factors helping to improve the financial position of households, particularly the good performance of the labour market and better financial conditions.

With regard to the first factor, job creation in the current phase of the recovery has been surprisingly vigorous, leading to a rise in wages, the main source of income for households. It is important to note that this increase in employees' salaries has occurred in a context of wage moderation, which is necessary to maintain competitiveness and partly explains the dynamism in employment after exiting the crisis.

The second factor, better financial conditions, has helped to improve capital rents. Although it is true that low interest rates have reduced the amount of interest earned, on the whole households have benefitted from low interest rates thanks to a larger drop in interest paid. This decrease in financial expenses is largely the result of the considerable deleveraging effort being made by households, which have reduced their debt by 13 pps of GDP since 2008. Moreover the average cost of debt has also fallen from the 4.6% reached in 2008 to 1.8% in 2014 (see the first graph).

The start-up by the European Central Bank of its large-scale quantitative easing programme suggests that the current environment of low interest rates in the money market will continue until at least next year and afterwards interest rates will start to rise gradually. In such a situation, the financial burden of households will remain very low: the average cost of debt in the period 2015-2018 should remain around current levels on average (1.9%). With regard to the stock of debt, we expect the necessary reduction in debt to be in line with improved financing flows. Household debt as a percentage of GDP could fall by around another 2 pps per year, a similar rate to the one in the period 2008-2014 although, on this occasion, it would be due to higher growth in GDP than in debt. As a result of this expected trend in interest rates and debt, the financial burden of households will remain at a reasonable rate of around 2.1% of gross disposable income (see the second graph).

This diagnosis certainly assumes a very favourable trend in interest rates for Spanish households, especially for those most in debt. In order to analyse how vulnerable households might be to rising interest rates, we can assume a less benevolent scenario in which interest rates are 150 bps higher than in the baseline scenario described, equivalent to a rise similar to the one occurring between June 2010 and October 2011 when the sovereign debt crisis began in the euro area. In this scenario, the average cost of debt would be 2.8% and financial expenses would also represent 2.8% of gross disposable income, both percentages in line with the historical average. In a more adverse scenario where interest rates are 300 bps higher than in the baseline scenario, the average cost of debt would increase to 4.2%, a similar level to 2008. However, the financial burden would reach 3.5% of gross disposable income, a high figure still slightly lower than the peak reached in 2008 because of the lower level of debt today. In summary, this simple sensitivity analysis shows that the deleveraging carried out by households over the last few years has strengthened their financial position and their capacity to withstand adverse shocks. 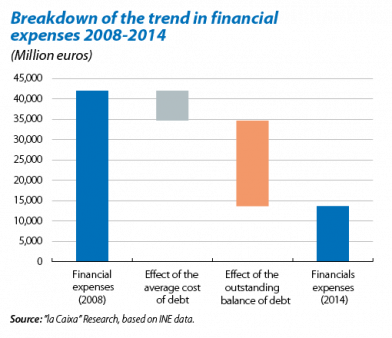 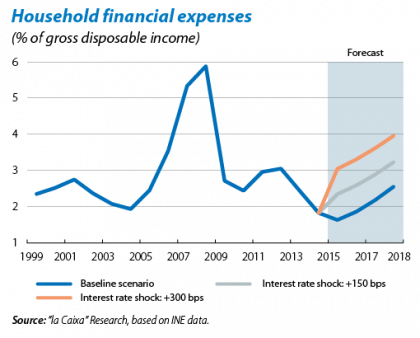