The impact of China on commodities

China is the world's main consumer of commodities. It consumes more steel and iron than the rest of the world in aggregate and its expenditure on oil is second only to the US, outdoing the Middle East and euro area. Apart from these huge figures, however, China's consumption of each commodity is uneven. Chinese demand for iron ore, for example, accounts for 59% of the world's total, of refined nickel, 50.3%, refined copper, 43.8% and copper ore, 26.9%, but in other cases, although it is still a large consumer, China's share in the global total is smaller. For example its demand for wheat accounts for 16.3% of the world's total demand, for oil, 13.7% and for natural gas, 4.7%.

The influence exercised by China over commodities comes from two effects: one related to growth and the other to the composition of this growth. More or less growth in the Chinese economy will result in more or less growth in the demand for commodities. If China grows less, so will the demand for a certain commodity, even more so when China is a major consumer of this material.

In addition to this growth effect is a second effect related to composition, which we will call capex-opex (capital expenditure and operational expenditure). It is a fact that China is evolving away from an investment-intensive model of growth towards a more consumption-based model. In this respect, we need to differentiate between commodities more closely associated with expenditure on investment (capex) such as cement, iron and steel, used to build infrastructures, and other commodities more closely associated with spending on consumption (opex), such as aluminium, used for transport goods and packaging, oil used in transport and plastics, and nickel. Copper stands halfway between these two groups.

This second effect means that some commodities win while others lose. One sign of this is the trend in China's commodity imports in terms of volume, in which iron is falling and foods and fuels are rising. Regarding the demand for basic metals which are associated with capex, such as iron and steel, there is the contractive effect of China's lower growth and the change in its model of growth, both intensified by the country's huge importance for world demand and the doubts hovering over its economy. This is largely the reason for the current downward cycle in basic metals: since February 2011, iron and steel prices have accumulated a drop of 73.4% and 59.9% respectively, and this slump has intensified in 2015 (with losses of 29.3 and 28.4%). For copper, affected by lower growth and not so much by the capex-opex effect, supply factors (lower costs) help to explain its 24.3% decrease in 2015.

In the case of opex commodities the composition effect (which is expansionary due to the increasing weight of operational expenditure in China) is moving in the opposite direction to the effect of lower growth and China's influence is therefore not so evident. It should be noted here that the slump in oil prices since 2014 is more the result of global supply factors (due to shale, increased production by Saudi Arabia, the treaty with Iran, etc.) than to the country's demand (the slowdown in China has been partly offset by a type of growth more favourable to oil consumption). We should also remember that gains in opex commodities can take some time to appear and that the consumption of a specific material starts to climb once a certain threshold is reached of per capita income, which a large part of the Chinese population has yet to achieve. 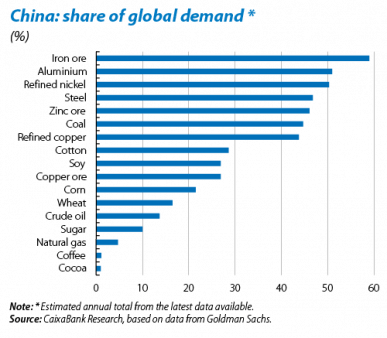 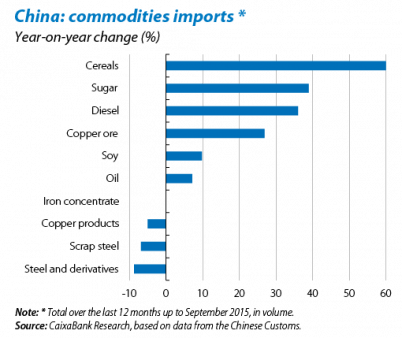