The slowdown in the emerging economies has led to doubts regarding the impact this might have on the returns expected from foreign direct investment (FDI) in these countries. In the case of Spain, the deterioration in Latin America's growth prospects has set alarm bells ringing. Although it is true that the share of Spanish exports to Latin America did not exceed 7% in 2014, the stock of Spanish FDI in the region is considerable, accounting for more than one third of the total. As FDI is more difficult to transfer from one country to another than portfolio investment, it is useful to analyse the geographical distribution of Spanish FDI in order to determine to what extent the slowdown in the emerging economies, and especially Latin America, could represent a risk for the expected returns from such investment.

The three main blocs receiving Spanish FDI in 20131 were, by order of importance, the European continent, Latin America and the United States. It should be noted that Spanish FDI was greater in Latin America than in the euro area, unlike the situation with portfolio investment, for example.2 In comparison, the percentage of European FDI was higher in Europe and Asia but much lower in Latin America (see the first graph). Nevertheless, although Spain is more exposed to the emerging countries than the rest of the European states, there are factors that mitigate this risk.

Firstly, although the main receiver of Spanish FDI in Latin America is Brazil, a country currently immersed in a deep recession, other countries with much better prospects also receive considerable amounts, such as Mexico and Chile. Consequently, if we classify all the countries according to their growth forecast for 2016 instead of by their location, the distribution of Spanish FDI is not so different from European FDI (see the second graph). Although it is true that the countries with negative growth concentrate a larger proportion of Spanish FDI, so do those with higher growth. In this respect, the expected return of Spanish FDI compared with European FDI is more volatile but on average they should be similar. Secondly, Latin America was one of the most profitable regions for Spanish FDI between 2008 and 2013 (perhaps influenced by the strong cultural ties): it almost doubled the return from investments in the euro area and was four times more profitable than investments in the US. Moreover, the relative stability of historical returns indicates that the latter is not so volatile throughout the economic cycle. The yields obtained historically therefore help us to understand why this geographical area has a higher proportion of Spanish FDI.

Although Spain could be more exposed to the slowdown in the emerging economies and a consequent deterioration in asset value, since it concentrates more FDI in Latin America than the rest of the European countries, an analysis provides arguments to suggest that this potential deterioration will be minor. Moreover, since this slowdown is expected to be temporary in most countries as they return to higher growth rates as from 2017, Spanish assets abroad are likely to continue generating considerable returns, as has happened in the past. For these reason, we do not expect the slowdown in the emerging countries in 2016 to excessively deteriorate the assets of Spanish FDI and, as a consequence, the net debt position.

1. Latest figures from Eurostat. As Spanish investments abroad accounted for a stock of approximately 50% of GDP in 2014, the geographical distribution is relatively stable over time.

2. More than 70% of the portfolio investment is in the euro area. 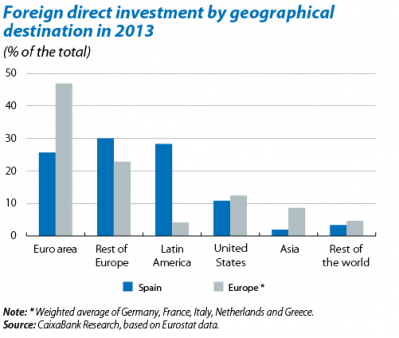 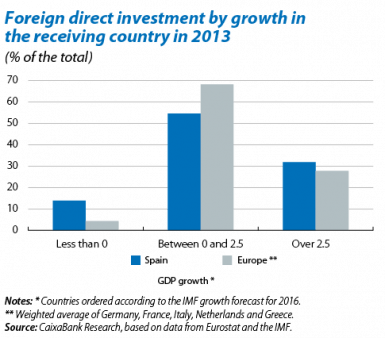