Brexit: a gamble with more costs than benefits

On 23 June the United Kingdom will hold a referendum to decide whether it remains in the EU. British opinion polls and betting firms give only a very slight advantage to the country remaining, so the probability of a Brexit is by no means low.1 This article analyses the economic consequences of leaving the EU for the United Kingdom and through which channels such consequences may occur.

The first obstacle to assessing the potential economic cost of a Brexit is the lack of precision regarding the potential new relationship between the United Kingdom and the EU. The most favourable option in the range of possible scenarios would be to establish a similar relationship to the current one, close to the Norwegian or Swiss model, by means of a free trade agreement with the EU for goods and some services, the free movement of people and a contribution to the European budget. The least favourable would involve no trade agreement being reached with the EU, relations being governed by the WTO which would not permit the free movement of people and the United Kingdom not contributing to the European budget. The agreement that may be reached in a hypothetical exit would surely be somewhere in the middle. The rest of the EU has no reason to be generous to the UK and would try to use its exit as a disciplinary example for other countries. But there is a mutual interest in the UK economy doing well so any «punishment» is unlikely to be too severe. In any case such reflection highlights the main effect of a Brexit on the British economy in the short term: the uncertainty that would be caused by the negotiation process and the tone and duration of such negotiations would determine the confidence of investors and households.

In this respect the impact on the financial sector would be particularly significant as this is more vulnerable to scenarios with upswings in uncertainty. There are many channels through which such an impact would occur (a higher risk premium and financing costs, liquidity problems and the depreciation of the pound) and the action taken by the Bank of England could turn out to be decisive in containing contagion to the rest of the economy. In fact the institution has already announced preventative measures to provide British financial institutions with extra liquidity.

Once an agreement is reached, the United Kingdom's new status would affect its economy through the channels of trade, finance, foreign direct investment (FDI), regulations and public budgets, among others. The commercial channel has been the most analysed: the higher customs tariffs and non-tariff barriers that might result from a Brexit could substantially reduce trade flows. Moreover the United Kingdom would have to establish trade agreements with third countries and would not longer form part of any agreements secured by the EU in the future.

Britain's financial sector could also be hard hit on losing the financial services «passport» that allows it to operate with a single licence throughout the EU. The ECB could also restrict certain financial activities to within the euro area so that other European financial centres might gain market share and erode the City's leading position. Flows of FDI could also fall in the medium term because a less open economy would reduce Britain's productivity and the economy would also lose its appeal as a gateway to the single market.

Two channels with a positive economic impact for the United Kingdom would be better adaptation of regulations to the preferences and needs of the British people (it is assumed that the country's exit from the EU would make it more flexible in both economic and legislative terms) and a reduction in the UK's contribution to the EU budget (equivalent in the last few years to 0.5% of GDP). Nonetheless these positive effects are small in size.

In conclusion, most studies analysing the impact of the UK's exit from the EU, although they use different models, hypotheses and channels, agree that the economic cost of a Brexit could be considerable. For example, the Centre for Economic Performance (CEP) estimates a negative impact in the long term, taking into account the channel of trade and public finances, of between 1.3% and 9.5% of GDP. However, although a Brexit is unlikely to be beneficial for the United Kingdom from an economic point of view, other more emotional factors such as anti-European feeling might end up deciding the result of the referendum.

1. The implied probability of Brexit calculated based on William Hill's betting odds would be around 32% (7 April). 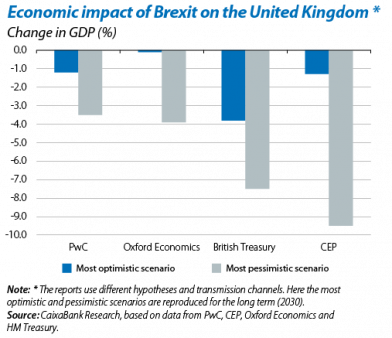