Spain's budget deficit: eppur si muove (and yet it moves)?

Spain's budget deficit stood at 5.0% of GDP at the end of 2015 (at 5.16% including financial assistance), representing a reduction of 0.8 pps compared with the figure of 5.8% recorded in 2014. However, it was also 0.8 pps above the target agreed with Brussels, a significant deviation that is difficult to justify with a healthy economic trend and low interest rates supporting fiscal consolidation. In fact, fiscal policy was clearly expansionary in 2015.

This year the economic improvement and trend in interest rates are once again expected to help reduce the budget deficit. In the case of revenue, the increase in employment, economic activity and household consumption will boost tax collection. In particular, the growth seen in the disposable income of households, which will reach 3.0% in 2016, and improved corporate earnings will continue to swell revenue via income tax, corporation tax and VAT. On the other hand revenue from Social Security contributions will also rise thanks to growth in employment, which will be 2.5% according to our forecasts.

Regarding expenditure, the marked decline in the number of unemployed, which will come close to 10%, will reduce spending on unemployment subsidies. Interest payments on public debt will also continue to fall thanks to the ECB maintaining an environment of very low interest rates.

And if, in addition to the cyclical factors affecting the main lines of revenue and expenditure, we also consider the effect of nominal GDP growth on the ratio of the budget deficit to GDP, we can conclude that the improvement in the economic cycle will also help to reduce the budget deficit by 1.4 pps, approximately. Nevertheless, it will not be easy to achieve the new target proposed by the government of 3.6% of GDP.1 The agreement regarding the non-availability of credit recently approved by the government, which cuts spending by 0.2 pps of GDP, will be added to the positive effect exercised by the economic cycle on the reduction in the budget deficit.2 However, the lower tax burden caused by tax reforms and increased spending on pensions will have the opposite effect so the deficit is likely to end up being close to 4% of GDP.

In summary, the bulk of the evidence available suggests that, this year, fiscal consolidation will continue at a similar rate to 2015. But we need to remember that the Spanish economy now has little leeway. Public debt ended 2015 at 99.2% of GDP and the risk premium is relatively contained thanks partly to the decisive actions taken by the ECB. Now that the economic context is favourable, it is the best time to dispel any lingering doubts regarding the government's commitment to place Spain's public finances in a healthy position capable of acting as an economic policy instrument should the country once again have to tackle headwinds.

1. The government has relaxed the fiscal consolidation schedule in the Stability Programme 2016-2019, setting the target deficit for 2016 at 3.6% compared with the 2.8% target set in the central government budget of 2016.

2. The updated 2016-2019 Stability Programme contains measures of additional expenditure pending specification by the autonomous regions, by means of agreements regarding the non-availability of credit that would represent a cut in spending of 2 billion euros. 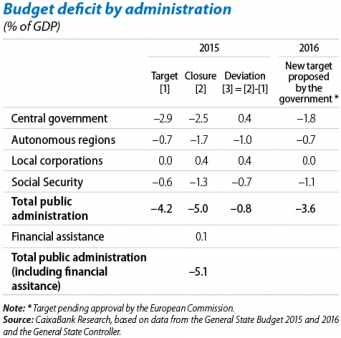 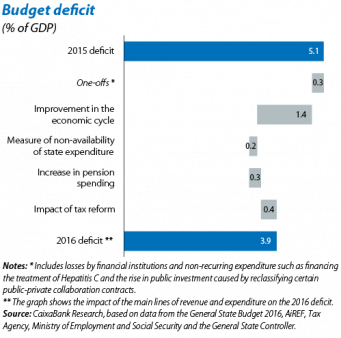