The seasonal nature of tourism

The tourism sector, one of the pillars of the Spanish economy, is booming after exceeding the figure of 68 million international tourists achieved in 2015, thanks to its great competitiveness1 and to a tailwind provided by the euro's depreciation, the euro area's economic recovery and the difficulties faced by some of its main competitors. Nevertheless the sector is now facing a very important challenge: how to become less seasonal.

Seasonality has a negative effect on the labour market as it directly contributes to temporary employment, which in Spain's case reaches 25.7%, the second highest in the EU and only exceeded by Poland. Moreover, to meet the peaks in demand during the high season, infrastructures are created whose potential is not maximised in the low season (for example, in 2015, hotel occupation in December was 45% compared with 77% in August).

Tourism tends to be seasonal at a global level but this feature is particularly strong in Spain where travel for leisure and holidays, more concentrated during the summer period, accounts for more than 80% of the country's international tourism compared with 70% worldwide (see the first graph).2 Although seasonality dropped considerably in Spain between the 1970s and 2000s, since then there has been no significant adjustment, although the percentage has not risen again. The increasing number of tourists, from 46 million in 2000 to 68 million in 2015, have continued the seasonal pattern, which means that the current low season is similar to the previous high season: tourist arrivals between October 2015 and January 2016 were very similar to those registered between June and September in the year 2000.

A number of factors affect seasonality, such as company and school holidays, and to some extent limit just how much it can be improved. An ideal strategy to reduce seasonality would be to encourage business tourism (a type of tourism which, additionally, has a higher average daily expenditure than the rest, as shown in the second graph), given that trade fairs and congresses tend to be held in the spring and autumn. Although Spain is already a highly competitive country in this kind of tourism,3 with 20% growth and more than five million business tourists in 2015, it barely accounts for 8% of the country's tourism, half the share it occupies in global tourism. Another way to mitigate seasonality would be to continue fostering the loyalty of tourists visiting Spain, which is already high.4 For example, as suggested by the OECD,5 the traveller's experience could be improved by increasing the efficiency of connections between regions via transport hubs, using integrated payment systems that include public transport, tickets to museums and shows or by taking advantage of the facilities offered by smartphone apps to provide user-friendly, multilingual information.

1. In 2015, Spain came first in the Travel and Tourism Competitiveness Index produced by the World Economic Forum.

3. As demonstrated by the fact that Spain is the third most popular venue for trade fairs and congresses in the world, behind only the USA and Germany.

4. 80% of the tourists that came to Spain in 2012 were repeating their visit and half of them had been 10 times or more. 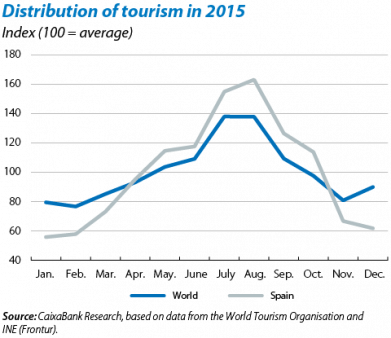 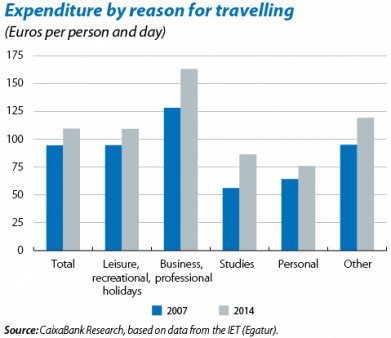