The rise in exports of Spanish goods and services, whose share in the country's GDP went from 24% in 2009 to an unprecedented 33% in 2015, has been crucial in reducing the current account deficit and boosting the economy. One fundamental factor behind this trend is increased competitiveness, as shown by the 18.5% depreciation in the real effective exchange rate over the same period (see the first graph).1

From a historical perspective, the first big devaluation in the peseta since 1970 occurred at the end of this decade, in the midst of Spain's transition to a democracy and within a context of great political uncertainty and high inflation. The second devaluation took place in 1982, in this case reducing the value of the peseta by 8% against the dollar. Three more devaluations were carried out between 1992 and 1993, of 5%, 6% and 8% respectively. All these devaluations were characterised by a nominal devaluation of the currency, a foreign exchange instrument that boosts exports as it makes them cheaper. However, with the introduction of the euro in 1999, Spain lost this authority and the latest episode of depreciation in the real effective exchange rate, underway since 2009, has largely been achieved by reducing relative unit labour costs (ULC), a phenomenon known as «internal devaluation». Specifically, the ULC of the Spanish economy compared with that of its main trading partners has fallen by 17%, resulting in a larger drop in the real exchange rate than in the previous episodes (see the second graph).

Also notable is the fact that the response by exports to gains in competitiveness has been similar to the one occurring after the nominal devaluation of the peseta. Specifically, for each 1% reduction in the real effective exchange rate, the share of exports in GDP increases by 0.6 pps. Moreover, the effects of internal devaluation over the medium to long term tend to last longer. Nominal devaluations typically bring about an immediate response in the real exchange rate but a large part of their effect is temporary as, sooner or later, nominal devaluation pushes up inflation, thereby undoing the initial gains made in competitiveness. The effects of internal devaluation may take longer to be seen initially but, a priori, there is no force that «automatically» reverses the gains achieved in competitiveness. In fact, two factors suggest this improved competitiveness will consolidate or even increase over the coming years. Firstly, wage rises are usually more closely connected to growth in productivity in exporting companies.2 In this respect, it is encouraging that many of the firms making the leap onto the international market are establishing themselves as regular exporters.3 Secondly, the reforms carried out over the last few years, such as the law to remove inflation-indexing in the Spanish economy and improved instruments to help workers and companies adjust employment conditions to the economic cycle should bring labour costs more in line with overall productivity.

However, although there are reasons to expect this trend will consolidate in the future and that the share of exports will approach, perhaps in the medium term, the figure of 47% recorded by Germany in 2015, it is vital to continue adopting measures that promote the international competitiveness of Spain's economy.

2. Moreover, growth in productivity tends to be greater in companies that export. 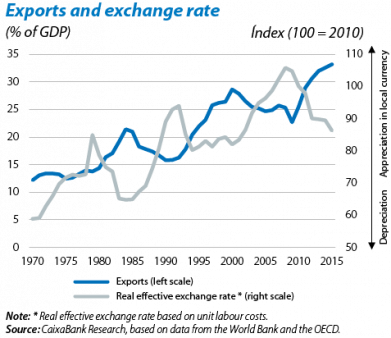 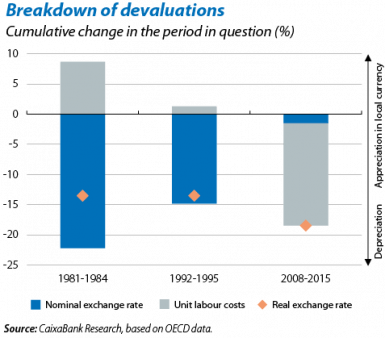