Base metal prices: a flimsy recovery

For the year to date, the price of all the industrial metals known as «base metals» (aluminium, copper, nickel, lead, zinc and tin) has risen by 9.5%, with substantial increases in the price of zinc (42.4%), tin (25.6%) and nickel (15.8%). These figures contrast with the downward trend in prices in preceding years and have stimulated debate as to whether we are witnessing the end of the adjustment in base metal prices or merely an (upward) interruption in a (downward) path.

To answer this question we must first apply the appropriate timeframe. Metals, like other commodities, tend to move in long-term cycles sometimes called «supercycles». Specifically, the current long-term cycle is believed to have started in 2003. As can be seen in the graph, base metals quadrupled their price between 2003 and 2007, then went through a slump due to the Great Recession in 2008-2009 and afterward recovered their cyclical peaks in 2011. Afterwards prices plummeted by 50% up to the end of 2015.

Having situated prices within the right timeframe, we need to examine whether the factors determining the long-term cycle for base metals are still the same or are fading. From the point of view of demand, the essential aspect to take into account is the shift towards the emerging economies and particularly towards China. According to the World Bank’s figures, the Asian giant went from consuming 17% of all the world’s refined metals in 2003 to 51% in 2016. For this reason, changes in Chinese demand for metals largely condition the trend in their world consumption: while, in the upward phase of the supercycle (2003-2007), Chinese demand for refined metals grew by 20% per year on average (and the global total by 6%), in the period of adjustment of 2012-2015, Chinese consumption rose by 10% and global demand by 5%.

So how has supply reacted to this growth in China’s consumption of base metals? By placing an increasing amount of product on the market. Between 2003 and 2015 the production of aluminium increased by 110%, that of iron by 80%, lead by 72%, copper and nickel by 47% and zinc by 45%. This is the result of considerable investment, with the top 10 firms in the metal production industry investing less than 10 billion dollars in 2003 but 400 billion in 2014. However, and in response to the more contained outlook for demand, this upward trend in investment has gradually adjusted in the second half of the supercycle. For example, investment by the top 10 companies fell by 20% between 2012 and 2014. With regard to production, the response is much more selective as appreciable reductions have been recorded in the production of iron ore and copper but not in aluminium, nickel or zinc, which has actually continued to increase.

Given this situation, what lies behind the change in 2016? Since the supply conditions have not varied substantially, the explanation must lie in demand. The demand forecast for 2016 is slightly different to the slowdown recorded in previous years. In particular, demand is expected to be strong in the three metals with the largest growth (zinc, tin and nickel), something which has been interpreted as a result of the impact of the infrastructure programmes and measures to boost credit in China.1

Does this situation imply a long-term change in the underlying fundamentals of metal prices? Probably not. If we look at the prospects for China’s metal demand based on the route map established in its Five Year Plan for 2016-2020, we can see that the two most important metals (iron and copper) will not benefit greatly from an economy that is transitioning towards a model with a greater share of services and consumption. However, some of the light metals which are already posting surprisingly strong increases (in particular zinc) will see their demand grow in the future.2 Nevertheless, given that these metals make up a smaller share of the total, the outlook for the group is still downward, a conclusion that is reinforced when we compare the current long-term cycle with other previous cycles. This does not mean that, in the short-term, the rally observed will not last for some time but it will be highly focused on specific metals.

1. Financial factors have also been put forward, such as greater investor appetite for commodities in general and expectations of the Fed delaying its monetary normalisation, weakening the dollar.

2. Zinc is used especially in industries related to electronics, which will be intensified in China’s expected transformation towards a more technological economy with greater development of urban transport infrastructures and a larger share of consumption. 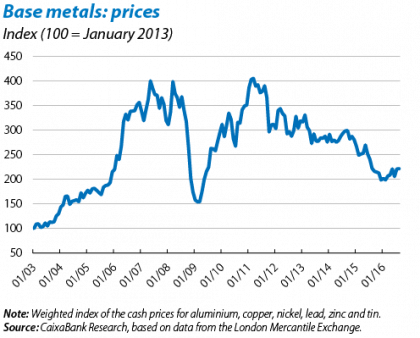