If any central bank stands out for the forcefulness and heterodox nature of its policies, it is the Bank of Japan (BoJ). It therefore comes as no surprise that the announcement made at the end of July that the institution would extensively revise its strategy resulted in huge expectation. In September this process culminated in the adoption of changes that are important not so much for what they are but for what they are not.

With the aim of putting an end to two decades of deflation, in the spring of 2013 the BoJ embarked on an ambitious programme of purchasing financial assets (quantitative and qualitative easing, QQE) which, in addition to public and corporate bonds, also included equity and real estate assets. Since then the monetary authority has carried out two large adjustments to its initial programme. The first, in October 2014, aggressively increased the annual amount of purchases (QQE II). The second, in January 2016, introduced negative interest rates on bank reserves. Nevertheless it must be said that these successive attempts have been unsuccessful. The most recent data put general inflation at –0.5% year-on-year, very far from the target of +2%. Core inflation has also shown signs of weakening once again over the last few months, remaining at +0.2% ,while the trend in inflation expectations (both those based on consumer and analyst surveys as well as those embedded in the prices of financial instruments) is also disappointing, standing at around 0%.

To tackle this rather discouraging panorama the BoJ has, for the third time, readjusted the direction of QQE. Specifically two modifications will be introduced. The first, and most relevant, shifts the focus of monetary strategy towards controlling the shape of the yield curve. In fact the institution has announced a «target» level for yields on 10-year sovereign bonds of around 0%. To implement this control on the bond market, a target has been set for expanding the flexible monetary base, replacing the previous fixed target of 80 trillion yen per year. The average maturity target for the bond portfolio has also been eliminated (which was 7-12 years). The second adjustment is related to reinforcing the inflation target: the BoJ has promised to expand the monetary base until the inflation rate goes above 2% for a sustained period of time.

The implications of these changes on financial markets are not minor. On the one hand, explicit control of the debt curve will allow the BoJ to influence this curve according to requirements at any particular time. First of all this implies a de facto increase in buyer pressure on the short tranches of the curve (given that the yield on the 10-year bond is already in line with the target). A steeper curve will help to offset the harmful effects associated with ultra-expansionary policies regarding the margins of financial institutions. On the other hand, the message that the BoJ will tolerate inflation above 2% is ultimately attempting to raise the inflation expectations of agents and thereby lower real interest rates.

However, there are reasonable doubts regarding the potential of this «third round» of QQE to reboot the country’s inflation. In particular, the aim of increasing inflation expectations looks particularly complex and will require, more than ever, larger amounts of credibility regarding the BoJ. A more decisive contribution from other areas of economic policy would also help in this task while the financial markets have actually reacted to the announced changes with scepticism. The yield on Japan’s 10-year bond has fallen slightly (to –0.07%), the yen appreciated by almost 1% against the dollar and long-term inflation expectations have not moved.

In some way this episode is revealing the limits of ultra-expansionary unorthodox monetary policies, with clearly decreasing and even negative returns. In particular the rectification made to achieve a steeper curve entails acknowledgement that indiscriminate purchases of bonds result in contractive transmission channels. On the other hand the message conveyed makes it clear that the BoJ has no intention to use what is known as «helicopter money», a limit which, if exceeded, could indeed take us to another dimension. The intrepid BoJ has ruled this out (at least for the time being). 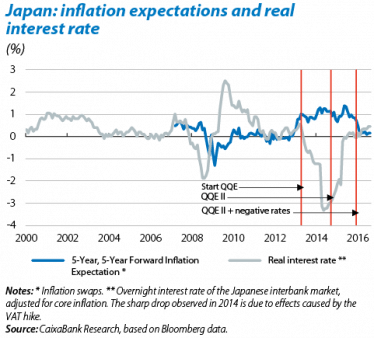