China’s financial system: a giant with feet of clay?

Doubts concerning the sustainability of China’s high level of debt have fuelled concerns regarding the state of the country’s financial system since, according to the World Bank, the domestic credit provided by China’s financial sector now represents 196.9% of GDP (in the euro area this is 155.6% and in the US, 238.3%). But apart from this rise in debt there are also worries concerning its quality and the institutions involved in this phenomenon, two factors which, as we will see, are closely related.

With regard to the institutions involved, China’s financial system is dominated by banks. Their assets are five times the size of the rest of the sector made up by shadow banks. In turn, large state-owned banks predominate, holding 38% of all bank assets. Nonetheless the map of banking is changing as this figure was close to 50% just five years ago. A large number of smaller banks have recently emerged, mainly urban commercial banks, which already hold 11.5% of bank assets (less than 1% in 2011), as well as commercial banks with mixed capital1 (18.5% of assets currently and 16% in 2011). At present there are 133 urban commercial banks and 12 mixed capital banks in China.

Turning our attention to debt quality, the official figures for non-performing loans place this at less than 2% of the total although the Chinese authorities themselves acknowledge that the proportion of bad quality debt is higher. On the one hand not all bad quality debt is classified as non-performing (for instance, some loans that have been restructured) while there is also the suspicion that many non-performing loans have been securitised and turned into wealth management products (WMPs) which banks have sold to shadow banking institutions or retail customers. WMPs are financial products that offer higher returns than bank deposits and represent a significant source of risk for two reasons. Firstly, there is a lack of information regarding which investments they are actually financing and, in fact, there are concerns that these are high-risk investments with a significant proportion in the real estate sector (where there are well-publicised fears of a bubble having been created). The second reason is the risk of maturity mismatch: the WMPs sold tend to have short-term maturities (six months) while the assets underlying these vehicles typically mature later (relatively illiquid loans with maturities of more than one year). An additional source of concern is the high degree of uncertainty regarding the real risk entail by these products for banks: 74% of WMPs have no explicit guarantee provided by banks but there are concerns of implicit or informal guarantees which, in the case of default, would mean that banks would have to assume part of the losses.

WMP have been used mostly by small and medium-sized urban commercial banks and also mixed capital banks as well as rural institutions,2 which do not enjoy the same degree of state support, in order to artificially boost t heir balance sheets when reporting to the regulatory authorities. And the risks of the financial system have recently become worse as these banks have resorted en masse to the interbank market.3 As these institutions have considerably increased their dependence on the interbank market, so have the risks of contagion from this segment of banks to the rest of the system. The latest alarm bell has been sounded by the main ratings agencies such as Moody’s and S&P, warning that small banks have begun to invest in the WMPs of other banks.

Another notable factor that threatens debt quality is the high exposure of urban and rural commercial banks to the real estate market. This phenomenon is due to the close ties between such banks and local authorities, leading to them granting a large number of loans to investors and local governments to finance costly real estate projects of dubious viability. A sharp fall in house or land prices could hit these banks’ balance sheets hard as it would reduce the value of the collateral used for the loans and push up the NPL ratio.

In summary, in the last few quarters the risks within the Chinese financial system have grown considerably. Small banks have come to the fore but they are the most vulnerable institutions. This has made the financial system even more complex and interconnected and has resulted in significant fragmentation of the risks and an increase in bad quality debt and exposure to the real estate sector. Such elements make it even more difficult to sort out China’s already intricate financial system.

1. The government doesn’t own mixed capital banks although, in general, it has a minority share.

3. The interbank market currently accounts for 16% of all bank financing compared with 8% in 2010, according to IMF data. 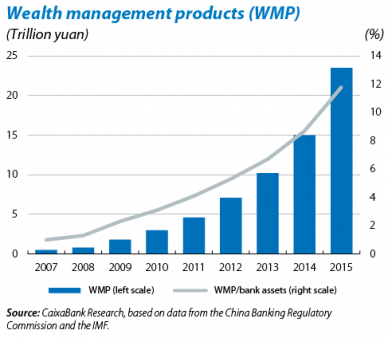