Investing in human capital: the key to good quality employment

A large amount of empirical evidence shows that higher qualified workers tend to get better-paid and more stable jobs; in other words, higher quality employment. In Spain, according to the data from the 2014 wage structure survey, workers who had completed at least the first level of secondary education received, on average, a gross annual wage of 18,041 euros while employees with a university degree reached 35,494 euros. This difference is even more notable if we take into account the fact that this wage premium tends to continue throughout a person’s working life.

In addition to wages, educational attainment also affects other characteristics of the labour relationship. As can be seen in the first graph, the temporary rate of workers with only a primary education is much higher than for those with a university degree. Moreover, individuals with a lower educational level also have higher rates of involuntary part-time employment. In fact, around 15% of employees with a primary education would like to work more hours compared with just 8% of those with a higher education.

Investing in human capital is not only related to compulsory and further education. Gary Becker, winner of the Nobel Prize for Economics in 1992, defined human capital as workers’ stock of knowledge (education and work experience) as well as other characteristics such as health and interpersonal skills which contribute to their productivity. In this respect, the continued training of workers plays a very important role in preventing the depreciation of knowledge and encouraging the development of new skills. Once again, workers with high educational attainment enjoy the best results. For example, according to the 2014 labour force survey in Spain, 8% of employees with a university qualification had received non-formal training from their company. This percentage falls to 2.9% of those workers with a secondary education and to just 0.1% of workers with only primary studies.

Nevertheless, we should not conclude from this analysis that all we need to do is increase workers’ training. There also needs to be a good match between employees’ qualifications and the skills required by the job in question. To allocate resources efficiently, those jobs that require basic qualifications should be carried out by workers with this type of education. On the other hand, jobs involving more advanced tasks should be carried out by workers with higher levels of training. It is revealing that, in Spain, a high percentage of workers have higher qualifications than those required by the job they are carrying out, a fact which, a priori, would suggest a large degree of over-qualification (see the second graph).1

Under some circumstances, however, this mismatch occurs when workers have a lower skills level than might be expected based on their qualifications, either because they did not acquire the necessary knowledge during their education or because their skills have depreciated over time. In this respect, the OECD Survey of Adult Skills shows that this could be particularly relevant in the case of Spain: in 2015, 41% of adults with higher qualifications scored low in the professional skills test compared with the OECD average of 27%. It therefore seems that the adult population’s level of knowledge is, in many cases, lower than would be suggested by their educational attainment level and this might explain, in part, the apparent high degree of over-qualification in Spain’s labour market. 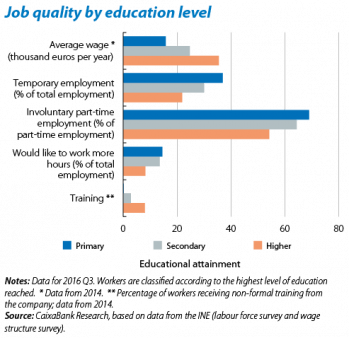 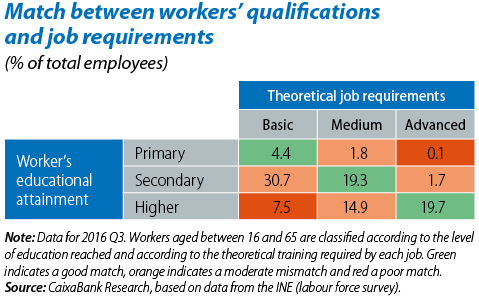