Emerging debt and currency mismatch: a combination to watch closely

At the end of 2007, private debt (of non-financial corporations and households) for the benchmark emerging countries as a whole stood at 85% of GDP. By the end of 2016, this figured had multiplied by 1.5, reaching 134.8%. This increase in private leveraging has occurred particularly through debt held in foreign currencies with companies taking advantage of accommodative international financial conditions to finance themselves in «strong currencies». On average, at year-end 2016 44% of emerging corporate debt was in a foreign currency.1

So is this a problem? Providing there is no extensive currency mismatch, no. Such a mismatch occurs when an economic agent has assets and liabilities, or collects and makes payments, in different currencies. This problem tends to arise in emerging economies when the local currency depreciates substantially, making it more expensive for such countries to meet their loan repayments or to pay their suppliers in a foreign currency. In general, a good way of estimating the size of a currency mismatch is by adding together the net foreign liabilities held in another currency by banks, firms and households and dividing this by exports. The aim is to identify whether international debt is sufficiently «hedged» by foreign assets in another currency or by an appropriate inflow of foreign capital.

Using a variation of the aforementioned calculation, we can see that, at year-end 2016, some emerging countries were experiencing a significant currency mismatch (see the enclosed chart). Specifically, there was a large mismatch in Turkey (whose net foreign liabilities exceeded its revenue from exports) and a somewhat smaller but still significant mismatch in Brazil, Chile and Colombia.2 This currently high level results from a sharp increase in currency mismatches in these four countries since 2008. Such figures challenge a commonly held belief that commodity exports benefit from «natural» hedging, since the aforementioned South American countries are international commodity producers but are nonetheless suffering from currency mismatches.

At this point in the discussion, the tendency is to tone down the alarm bells by noting that companies can hedge their exchange rate risk through financial instruments. However, the use of financial hedging could actually be less prevalent than expected, even in those firms potentially affected by a currency mismatch. For instance, a recent study by Brazil’s Central Bank noted that 35.5% of all corporate debt in foreign currencies was held by exporters; 17.5% by non-exporters with financial hedging and the remaining 47% was not hedged at all, not by «natural» or financial means.

In short, the risk is there and if little attention is paid to such a threat it is probably because most emerging currencies have appreciated considerably this year so far (or even earlier, in cases such as the Brazilian real). However, should this trend reverse, and to paraphrase Warren Buffett, we will see who has been swimming naked once the tide goes out.

1. It is much less normal for households to resort to financing in foreign currencies. Nevertheless, Poland is an exception in that 43% of its household debt is in a foreign currency.

2. The previous mismatch has been calculated by adding together three groups: i) net foreign assets of national banks; ii) the difference between international bank loans to households and non-financial firms less their deposits at these banks, and iii) international debt issuances by non-financial firms. This figure has then been divided by the exports of goods and services. When there is a mismatch, the quotient is negative and, the greater the mismatch, the more negative the figure. This is a similar measure to the one calculated by the Bank for International Settlements (see Chui, M. et al., 2016, «A new dimension to currency mismatches in the emerging markets: non-financial companies», BIS Working Papers, 550). 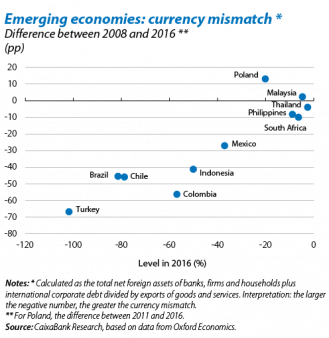