Crude oil prices: the puzzle of the impact of OPEC’s cut

The recent fall in oil prices, placing a barrel of Brent oil temporarily below USD 50 and close to its level before OPEC announced its agreement in November 2016, has revived doubts regarding the impact of the latter and, more generally, the oil cartel’s ability to sustain a higher price for crude oil. In fact, although OPEC agreed in May to extend its production cut until the beginning of 2018, the price has remained within a range close to USD 50.

Doubts regarding the impact of OPEC’s cut are mainly due to the fact that US crude oil stocks are still at an all-time high (over 500 million barrels). According to the market, this means OPEC’s cap on its output has not managed to reduce the excess supply (there have been no significant changes in demand over the past few months). In general, three arguments are used to explain the OPEC agreement’s limited impact.

First, whether the cuts are being effectively implemented. However, the degree of compliance has been very high so far (90% in April, albeit varying across OPEC members). Crude production by OPEC therefore fell below 32 million barrels per day (mbd) in April (compared with 34 mbd at the end of 2016). This level is in line with last November’s agreement (see the first chart). The other large oil-producing countries that do not form part of OPEC but signed the agreement, such as Russia, have also broadly complied with the target.

The second argument used to explain the limited effect of OPEC agreement’s is the increase in US production, especially unconventional oil, which might have neutralised the organisation’s cutback. However, although this argument may become extremely valid in the long run, in the short term the increase in shale production is unlikely to totally offset the output cuts implemented by other large producers. Since January, the production of oil products1 in the US has «only» risen by 270,000 barrels per day. In comparison, OPEC has reduced its crude oil production by more than 1.2 mbd from the benchmark set in the agreement, and by more than 2 mbd since the peak reached at the end of 2016, just before the cuts were implemented. Nevertheless, from now until the end of 2018, the US Energy Information Administration expects US oil production to increase by 1.63 mbd.

Finally, one last explanation is that, in spite of the production cuts, OPEC exports have remained stable. In fact, between January and April OPEC’s crude exports only fell by 460,000 barrels per day on average, compared with the same period in 2016 (see the second chart).

Nevertheless, OPEC’s crude oil exports are likely to fall over the coming months as stocks in its member countries decrease. This should help to push up oil prices. In fact, a drop of 1.12 mbd could already be seen in April in OPEC’s crude oil exports. Although the effect of these cuts should start to push up crude oil prices in the short term, in the long run supply factors, and especially the increase in US shale production, still point to a gradual and relatively limited rise.

1. Oil products are those resulting from the processing of crude oil, natural gas and other hydrocarbon compounds. In addition to petrol, they also include, for instance, liquefied petroleum gas, kerosene and lubricants. 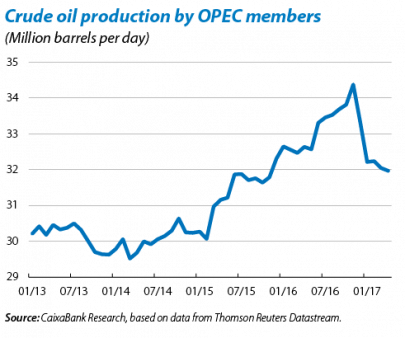 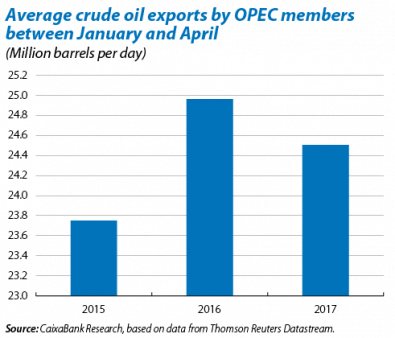