Spain’s public debt has been around 100% of GDP since 2014, 10 pp higher than the euro area average. This high debt makes the Spanish economy vulnerable as it means public sector borrowing is high and could limit fiscal policy’s room to manoeuvre should the economy begin to slow down. This has not always been the case, however. Between 2005 and 2008, public debt was around 40% of GDP, about 30 pp below the euro area average.

A large part of this increase is due to the primary deficit remaining high over the past few years. Because of the crisis, public expenditure increased at the same time as public revenue plummeted. This pushed the primary deficit to around 7% of GDP between 2009 and 2012 (without bank restructuring costs), 4 pp higher than the euro area average. Since then, the primary deficit has fallen significantly, reaching 1.5% of GDP in 2016.

Since 2014, the level of debt has stabilised at around 100% of GDP thanks to efforts to reduce the public deficit and also to the economic recovery. Low interest rates have also lowered interest payments on debt as a percentage of GDP.

Over the coming years, the challenge will be to start reducing public debt. Between 2017 and 2020, the government expects public debt to fall by 1.7 pp per year on average, reaching 92.6% of GDP.1 According to these forecasts, three major factors will support this reduction: the good trend in GDP, which will post nominal growth of around 4% year-on-year; the correction of the primary balance, with a surplus of 2.1% of GDP forecast by 2020, and the ECB’s accommodative monetary policy, which will help to keep debt interest payments relatively low, at 2.7% of GDP.2

Longer term, and based on a debt level of 92.6% of GDP in 2020 forecast by the government, if a 2% primary surplus were maintained, the country would still take two decades to bring its public debt below 60% of GDP.3 Moreover, maintaining a primary surplus of this magnitude is no easy task. In fact, a look at the countries around us shows that a primary surplus in excess of 2% has not been commonplace. Between 1980 and 2016, euro area countries had a primary surplus above 2% in 18% of cases and only Belgium and Finland managed to maintain this level for 10 consecutive years. A significant reduction in the public deficit is the first step to stabilising public finances but returning public debt to pre-crisis levels will require a lot of hard work and perseverance.

2. Interest rates are expected to rise very gradually over the next few years. Interest expenditure is also likely to continue at a similar level to the present due to the long average maturity of the debt (currently seven years), making the average cost very static.

3. This would be achieved by 2036 if nominal GDP growth were equal to the average nominal interest rate for the debt. 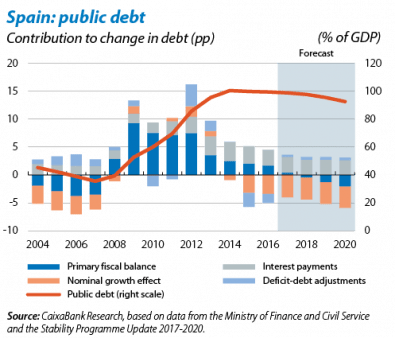 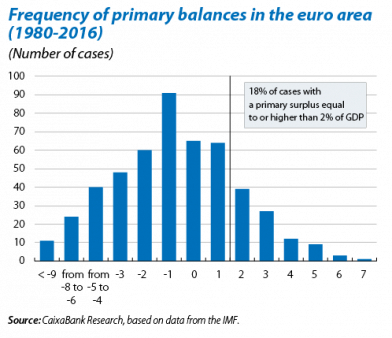