Why has the Federal Reserve cut interest rates?

• The Fed has cut interest rates in 2019 for the first time in 11 years. However, it has barely lowered its growth outlook for the US and has justified the cut with the weakness of inflation and the persistence of risks.

• Is it possible that the Fed has changed its reaction function? The results of the analysis in this article suggest so. However, this is not the first time that the Fed has responded more to the risks than the data themselves, and this shift could be explained by structural changes in the economy, such as the flattening of the Phillips curve.

From forward guidance to data dependency

When the US Federal Reserve began its hiking cycle in 2015, it did so in a gradual and predictable manner, offering clear guidance on the expected evolution of rates (forward guidance). After raising them by 225 bps and reaching the level of the natural interest rate, according to the estimates of some members of the FOMC (see first chart), at the end of 2018 the Fed reported its intention to cease forward guidance and adopt an approach more dependent on the economic and financial data.1

Following this change of strategy, and in an environment with a global slowdown and contained inflationary pressures, during the first half of 2019 the Fed remained patient and left interest rates unchanged, despite the strength of the labour market. However, in July, the intensification of geopolitical uncertainty (mainly driven by the resurgence of the trade tensions between the US and China and an apparent increase in the likelihood of a hard Brexit), coupled with the decline in inflation expectations, led the Fed to lower rates by 50 bps in Q3 and by 25 more in October.

From data dependency to risk management

The most discerning readers will have noticed that the Fed cut interest rates not only due to the trends in the economic data (weakness in inflation and its outlook) but also due to changes in the balance of risks. In fact, analysts’ forecasts for economic growth (and those of the members of the Fed itself) have not changed significantly since October 2018, which suggests that the Fed’s reaction should have been less aggressive. In particular, according to the historic relationship between changes in the official interest rates and in the growth forecasts that accompanied them, the Fed should have cut interest rates by 15 bps in 2019, rather than by 75.2

Furthermore, we must bear in mind that lowering interest rates by 75 bps in 2019 substantially depletes the Fed’s margin to implement further rate cuts compared to that which it had in, say, the year 2000. The fall in the natural rate reduces the Federal Reserve’s margin (and that of other central banks) to stimulate the economy through conventional measures. After all, cutting interest rates by 2 bps is relatively more expensive for a central bank when the natural rate is 1% compared to when it is 5%. For this reason, if we adjust the cumulative decline in the interest rate to account for the level of the nominal natural interest rate3 and we compare the Fed’s reaction with that seen in other cycles of rate cuts, we see that the Fed’s reaction has been somewhat excessive: while the revision of forecasts in the Great Recession was 17 times greater than the current one, the monetary policy response was only 3 times more reactive. It is true that, at that time, the Fed also sought to stimulate the economy using non-conventional tools (QE and forward guidance). However, if we perform the same analysis for the cycle of rate cuts of 1992 or 2002, we note that the revision of forecasts was 15 and 9 times greater than the current one, while the monetary policy response was only 2 and 3 times more reactive, respectively. Furthermore, these rate cuts are in addition to the change in the outlook. In the second half of 2018, not only did the Fed rule out interest rate cuts, but it also gave indications of several rate hikes in 2019, bringing rates up to 3.1%.

The Fed’s reaction function has changed, but this is not something new

This evidence suggests that the Federal Reserve has changed its reaction function, now relying less on its baseline scenario and more on the risks affecting its forecasts. In fact, several members of the Fed have acknowledged this to be the case,4 advocating a monetary policy that proceeds with caution in an environment like the current one (i.e. one in which significant downside risks coexist with reasonably strong economic activity).

On the other hand, this is not the first time that the Federal Reserve has acted this way. According to the minutes of the Fed’s own meetings, since 1987, uncertainty has been mentioned several times as a reason for not implementing planned changes to interest rates. For instance, in 1998, fears of a surge in inflation supported a rate hike, but faced with the risk of the Russian debt crisis of that same year having a significant impact on foreign demand, the Fed opted to do the exact opposite, cutting rates instead. At that time, the members of the FOMC interpreted that the cost of an overheating of the economy was lower than that of an overreaction of monetary policy.5

Is it the Fed that has changed... or the world around it?

The change in the Fed’s behaviour can also be explained by changes in how the economy operates. On the one hand, inflation has remained contained and below the 2% symmetrical target for some years now, despite the fact that the unemployment rate has been at a historic low for the past 50 years. This suggests that the Phillips curve is not acting within the same parameters as it used to, so it is natural that the Fed should act differently in order to stimulate inflation.

On the other hand, the revision of the economic outlook, both according to analysts’ consensus and on the part of the IMF and the Fed itself, has been moderate. This is partly due to the expectation that a more accommodative monetary policy would partially offset the slowdown. In particular, there has been a change in the outlook regarding monetary policy which has helped to soften what could otherwise have been a much sharper revision of the GDP growth forecasts: in September 2018, the median member of the Fed believed that the official interest rate would be 3.4% by the end of 2020, whereas in the latest update in September this figure stood at 1.9%. With this revision, if we take the impact that changes in the Federal Reserve’s interest rate have historically had on GDP growth, and we subtract this impact from the Fed’s current growth forecast, we see that the downward revision to the forecasts would have been much greater (see last chart).6

What can we expect in the future?

If predicting the future path of interest rates had already been made more difficult since the Federal Reserve stopped providing forward guidance, the greater sensitivity to risks affecting the scenario only adds yet more uncertainty to the decisions of the FOMC. Furthermore, this complexity is compounded by the pressure on the independence of the Federal Reserve in a US presidential election year, in which the president and future candidate, Donald Trump, will most likely demand additional monetary stimuli. Therefore, although the Fed insists that interest rates are at an appropriate level and does not plan to alter them if their expectations for the economy are met (GDP growth of around 2%, a strong labour market and inflation approaching its target rate), it is possible that the Fed will maintain its dovish bias throughout 2020 and it could cut interest rates even further in the event of an increase in uncertainty or further signs of a slowdown in the economy. In fact, the forecasts we present in this Monthly Report show precisely that.

3. We divide the Fed’s cumulative reduction in rates by the nominal natural rate of interest in force prior to the first cut, in order to estimate how much of the margin for conventional monetary policy has been used up.

6. Specifically, we use the results of the autoregressive vector from J.L. Willis and G. Cao (2015), «Has the US economy become less interest rate sensitive?», Economic Review (01612387), 100(2), which they use to estimate the reaction of GDP in the US to a change in the Fed’s interest rate. 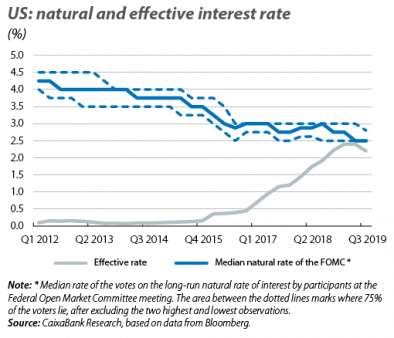 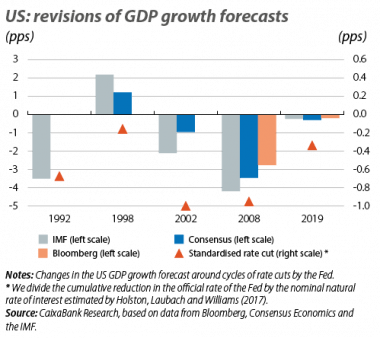 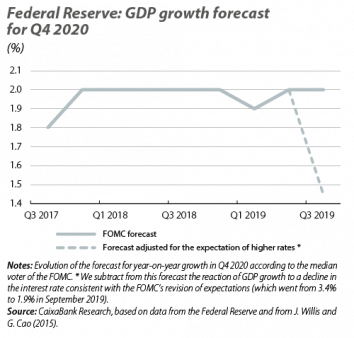