The two housing markets in Portugal

• Over the coming quarters, housing prices can be expected to embark on a moderate slowdown. However, highly dovish financial conditions, the strength of domestic demand and the fact that the supply of construction is responding slowly highlight the risk that the moderation in price growth may be somewhat limited.

Housing prices in Portugal continue to register strong growth, reaching 6.9% quarter-on-quarter and 9.7% year-on-year in the first half of the year as a whole. Furthermore, the value of property according to bank appraisals is at an all-time high, standing at 1,299 euros per square metre and with a year-on-year growth of 7.8% in September. What factors explain this trend and what is the outlook for the real estate sector over the coming quarters?

Driven by the golden visa scheme, non-residents continue to make a significant contribution to the buoyancy of the real estate market in Portugal. Foreign investments in real estate reached 3,400 million euros in 2018 (a growth of 22% compared to 2017) and represented 13% of the total value of all property transactions in that year. It is estimated that the so-called ARI1 scheme (better known as the golden visa scheme) represents around one third of this segment, i.e. 4.3% of all transactions in 2018. In the first half of 2019, non-residents were responsible for 16% of the total value of all property transactions, half of which were carried out by investors from France, the United Kingdom, Brazil and China.

Moreover, between 2012 and 2018, the value of the properties acquired by non-residents was double that of the properties acquired by residents, on average (see first chart). This difference in purchasing capacity has contributed to the escalation of housing prices and the resulting reduction in the accessibility of home ownership for the Portuguese. In particular, the accessibility indicator (the ratio between price and household disposable income)2 points out that housing prices are high in relation to the national purchasing power. In fact, the indicator has been at very high levels since the first quarter of 2018 from the point of view of local demand (see second chart).

Just how high are these prices? Bearing in mind that disposable income is one of the pillars that sustains the rise in housing prices, it is possible to estimate the relationship between the growth of these two variables. The third chart shows the historical relationship between them: normally, growth rates of household disposable income of 4%, like that observed in 2019,3 have been associated with a rise in the price of housing of around 5%.

The current situation, therefore, appears to be entirely abnormal. The trend in the demand for housing among the Portuguese is not sufficient to fully explain the significant growth in prices. Most likely, the aforementioned surge in non-resident demand is also playing a decisive role. The stark difference between the purchasing power of foreigners and the Portuguese may have segmented the housing market in Portugal, in the sense that nationals may end up opting for an inferior segment when it comes to buying a home. In fact, the accessibility ratio stands at less demanding levels if we exclude the non-resident segment (see fourth chart).4

Over the coming quarters, housing prices can be expected to register a moderate slowdown. In fact, in the second quarter, housing transactions fell in year-on-year terms for the first time since 2013, which could indicate a cooling of the market. Other indicators, such as the sector’s confidence index,5 property sales in negotiation and customer enquiries, are at more moderate levels, suggesting a slowdown in activity. In addition, as a result of a less favourable external environment and a slight slowdown in tourism, a slowdown in non-resident demand is to be expected. Nevertheless, the effect of the moderation in prices on the supply side will probably be contained, as residential construction indicators point towards a somewhat limited reactivation of the supply (indicators such as cement sales, construction licenses and employment in the sector show some buoyancy, but remain low in absolute terms). Furthermore, there is still an environment of accommodative financial conditions, which support domestic demand: interest rates are at historically low levels, while the financial cost of housing credit for resident households is among the lowest levels in Europe, as shown by the last chart. In addition, the demand for credit for purchasing property among households remains strong.6

1. Refers to beneficiaries of what is known as an ARI (a residence permit for investment activities, or golden visa). This is a scheme created in October 2012 that allows non-residents from other countries who make investments in Portugal to obtain a temporary residence permit in order to conduct business, with an exemption from requiring a visa to enter Portuguese territory. Since the scheme began, 94% of the investment has been focused in the acquisition of real estate.

2. An indicator created using the ratio between nominal housing prices and the net disposable income of the average home (OECD).

3. Based on data from AMECO.

4. The estimate excluding non-residents is obtained by correcting the accessibility ratio to account for the difference between the average price of the properties acquired by residents and by non-residents.

5. According to Confidencial Imobiliário.

6. Bank of Portugal, bank survey on the credit market. 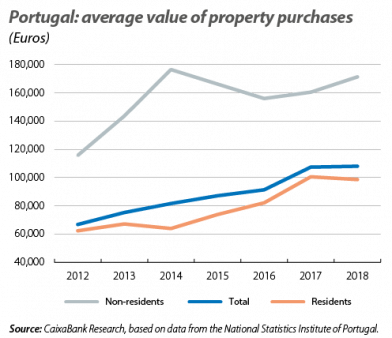 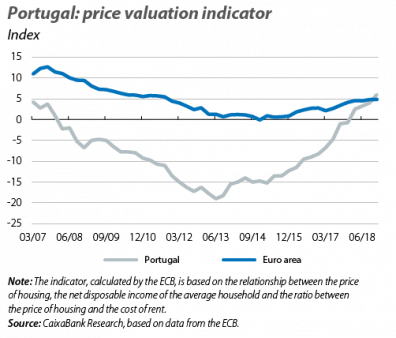 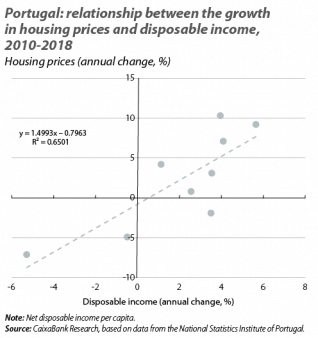 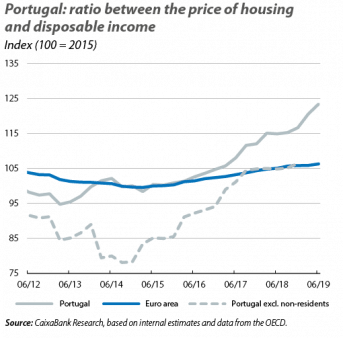 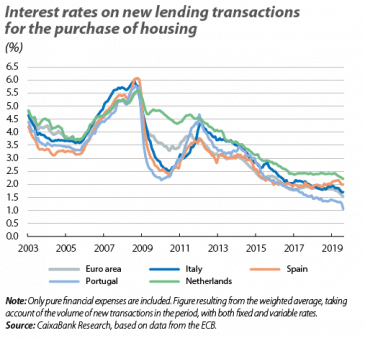