• Contagion from industry to services has, so far, been moderate. However, services could end up suffering if the risks affecting global growth intensify.

The weakness of the industrial sector, which we have recently analysed,1 is one of the major factors behind the slowdown in the global economy and, in particular, that of the euro area. However, the resilience exhibited by the services sector, which accounts for the bulk of economic activity,2 continues to drive growth and gives continuity to the expansion. But just how resilient has the services sector really proven to be? Is there a risk of contagion from industrial weakness?

Industry and services: where are we in the cycle?

Since the end of 2017, there has been a widespread moderation in manufacturing activity, with the sector finally entering a recession in 2019. This is well illustrated by the decline in indicators such as the manufacturing PMI, which measures activity through surveys that capture the sentiment of business managers in the sector. Specifically, concern over the resilience of services and the possibility of contagion arises when we observe that the services PMI has also suffered a steady slowdown since the end of 2017. However, we should not be overly hasty to draw conclusions from this figure. As can be seen in the first chart, the moderation in services activity has been less intense and, in stark contrast with industry, the indicators continue to suggest expansion in the services sector.

In addition, while sentiment indicators such as the PMI are useful for measuring the growth of real activity in both industry and services,3 a 1-point drop in the services PMI does not reflect the same reality in industry as it does in services: as shown in the second chart for the specific case of the euro area it projects a slowdown in the gross value added (GVA) in the industrial sector which is almost three times greater than that projected for the services GVA. In other words, the fall in the services PMI would need to be almost three times greater than that of the manufacturing PMI in order to reflect the same slowdown in real activity in both sectors of the euro area.

This is precisely the opposite of what has happened since 2017, so it is not surprising that the GVA of services has slowed down much less than that of industry (see third chart) and that it continues to grow by around 2% in the euro area as as whole (1.7% year-on-year in Q3 2019).4 In any case, it is also clear that there has been a moderation in services (the growth of the sector’s GVA in the euro area was 2.8% in Q4 2017) at the same time as there has been in manufacturing. This also comes as no surprise: the ageing of the business cycle and the erosion that the trade tensions exert on confidence (two of the factors that have penalised industry) have also weighed down on services.

Despite the resilience of services set out above, there is a risk that it could be only a matter of time before industry’s weakness is transmitted to the services sector. Nevertheless, the historical relationship between the two sectors does not appear to support this fear. In particular, as shown in the fourth chart, the correlation between the manufacturing and services PMIs for the euro area is at its strongest when we compare their contemporary values. In other words, the evolution of manufacturing and services activity is, largely, simultaneous (or at least close) in time.

However, there are two major aspects that could revive fears. The first is the question over the true weight of industry, one that is important to address. On the one hand, we know that in most economies, especially advanced ones, the relative weight of industry has steadily declined. For instance, in the US the sector has gone from representing 20% of nominal GDP in the 1970s to 10% today. On the other hand, it is also known that part of the services sector has been «industrialised», meaning that despite being services, its activity is more integrated with industry than it is with other sectors or the final consumer. In this regard, a recent study by the Bank of Spain5 suggests that this «manufacturing bias» of services is moderate: the turnover of the services sector that is generated by the manufacturing industry represents between 7% and 12% of the total turnover of services in Germany, France, Italy and Spain.

Secondly, never in the recent past had there been an increase in uncertainty over the policies governing global trade as we have seen in the past three years. Therefore, what will come of this interaction between uncertainty and the cyclical slowdown remains to be seen. On paper, services should be less affected because, by their very nature, they are less open to trade and, in addition, they have been excluded from the tariff war. However, if the indirect effect of the trade conflict (i.e. uncertainty) were to dominate rather than the direct effect of tariffs on the affected trade flows, a contagion to services as a result of a worsening of consumer, investor and business confidence could not be ruled out.

All in all, the latest indicators are reasonably favourable and recent geopolitical events (see the Focus «International trade: first impression of the First Phase» in this Monthly Report) suggest that the uncertainty ought to subside, although the recovery of confidence will be a gradual process. That said, history recommends us to be cautious: when, in previous episodes, the weakness of industry has opened up a gap with the performance of services, sometimes services have remained resilient and the gap has been closed with the recovery of industry, but on other occasions industry’s weakness has ended up dragging services down.

1. See «The difficulties of the global manufacturing sector» in the MR12/2019.

2. In the euro area and Spain, for instance, it accounts for around 75% of the gross value added.

3. As demonstrated in the second chart by R-squared values that are both high and similar in both sectors.

4. Besides taking into account the fact that the PMI-GVA sensitivities are different in industry and services, the fall in the services PMI observed in the euro area (a 3-point difference between the quarterly averages for Q4 2017 and Q3 2019) is consistent with the slowdown registered by the GVA (1 pp). In contrast, the fall of the manufacturing PMI (13 points) suggested a much greater contraction of industrial GVA (10 pps, versus the 6 pps observed).

5. See the article «The recent slowdown in activity from a sectoral perspective» in the Bank of Spain’s Quarterly report on the Spanish economy for Q4 2019. 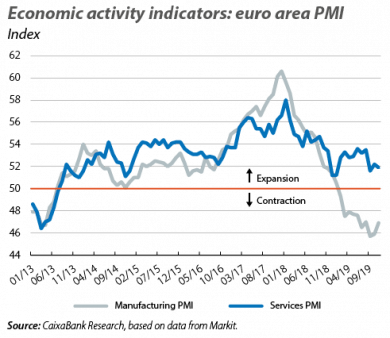 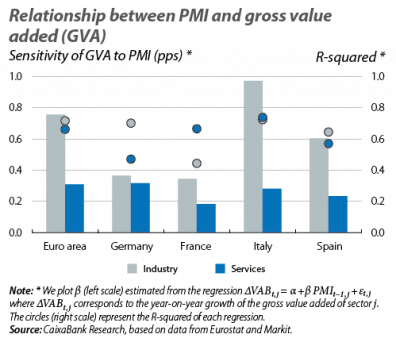 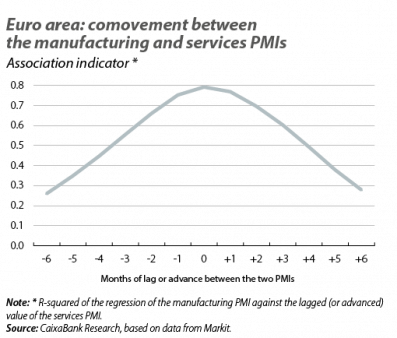