Like water from a shower, an economy is not always at the right temperature. Sometimes too hot, this causes inflationary pressures and other imbalances such as a high external deficit or asset bubbles. On other occasions too cold, this pushes the unemployment rate above what is usual and inflation falls below target. The level of economic activity does not often coincide with what an economy can produce in a sustained way, without generating pressures that push inflation away from its target or other imbalances, what is called potential GDP.

There are many different ways of defining and estimating potential GDP (see the article «How is potential GDP calculated?» in this Dossier). Its simplest and also most widely used version defines it as the level of production that is compatible with stable core inflation around its target level.(1) (2) This, in turn, requires that the degree of production capacity utilization and, in particular, the unemployment rate be at a level that does not put pressure on prices and wages, either upwards or downwards. This unemployment rate is called the NAIRU (Non-Accelerating Inflation Rate of Unemployment) or the structural unemployment rate.

In this respect, potential GDP is determined by anything that affects an economy's sustainable production capacity: the extent of production factors (size of the labour force, human capital, physical capital including infrastructures, etc.), how intensively these can be used without causing price tensions (the NAIRU) and the productivity they can be combined with (called the total factor productivity). In general, an economy's potential GDP keeps growing thanks to the gradual accumulation of production factors and technological innovation. In some circumstances, however, the level of potential GDP can fall temporarily such as in the case of a war or a natural disaster. Potential GDP can also fall during a deep, prolonged recession insofar as part of the capital stock becomes unusable (for example, surplus construction cranes after a real estate bubble has burst) or when some long-term unemployed leave the workforce permanently.

Economic policy plays a fundamental role in determining the path of potential GDP in the medium and long term and, therefore, an economy's capacity to grow via so-called supply policies. For example, labour legislation, active and passive employment policies, taxation, the retirement regime and education policy condition, together with demographics, the trend in the labour force and the NAIRU. For their part, public investment and policies to encourage or discourage private savings affect the trend in physical capital. Other factors, such as opening up the economy to international trade, the flexibility of the labour market, the degree of free competition, the regulatory environment and bureaucracy, the judicial system, etc. greatly influence the total productivity of these factors. In general, institutional quality is crucial both in terms of accumulating production factors and also in terms of their productivity.

When designing and evaluating macroeconomic policies, economic authorities and analysts resort to a concept related to potential GDP: the output gap, defined as the difference between actual and potential GDP. A positive gap indicates the economy is operating above its sustainable level as a result of excessive demand. A negative gap means there is excessive supply or unused production capacity due to a lack of demand. Just as, if the water in the shower is too cold, we open the hot tap a little more, when this gap is negative the authorities try to stimulate economic activity by using fiscal or monetary policies. Gap estimates, which can be interpreted as the cyclical component of GDP, are also used to identify the cyclical component of other variables of interest, such as the public deficit (see the article «The output gap, GPS and other fallible guides» in this Dossier).

So countercyclical policies attempt to influence aggregate demand to return GDP to its potential path or, in other words, to close the output gap. In this respect, an economic cycle can be broken down into four phases that require different macroeconomic policies (see the above graph): a first phase with a positive gap, in which growth remains above its trend and inflationary pressures and other imbalances increase; a second phase in which GDP growth is below its trend or when GDP even falls, closing the gap and reducing pressure on inflation; a third phase with a negative output gap and growth below its trend, or with GDP that continues to fall, which can lead to inflation falling below target; and, lastly, a phase that still has a negative gap but with growth above the long-term trend, which tends to close this gap. The Spanish economy is currently in the third phase, the one requiring greater support for demand. Another issue is the room that economic authorities have to implement these policies (currently inexistent for Spain in the fiscal area).

However, supply policies (structural reforms) can have a beneficial effect, even in the short term. By generating confidence, they can help to improve a demand that is overwhelmed by pessimism and uncertainty. In the current circumstances, indeed, there's nothing better for the short term than what is also good for the medium and long term.

This article was prepared by Enric Fernández

(1) Core inflation is general inflation corrected for the effects of disturbances on the supply side, such as a shock in oil or food prices or tax changes.

(2) A recent article argues that identifying sustainability with stable inflation is too restrictive and that it is also important to take financial imbalances into account (Borio, Claudio, Piti Disyatat and Mikael Juselius. 2013. «Rethinking potential output: Embedding information about the financial cycle», BIS Working Papers no. 404). 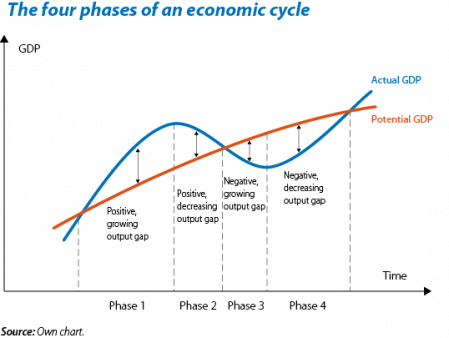