Since the economic and financial crisis started in 2007, thirty-four developed countries have reformed their pension systems to a greater or lesser extent.(1) This reformist wave is a warranted phenomenon as the serious cyclical economic deterioration is in addition to growing structural pressures threatening public pension systems. According to European Commission figures, expenditure on public pensions as a percentage of GDP will grow in almost all European countries over the coming decades (see the graph below). This rise will be particularly dramatic in countries such as Luxembourg, Cyprus and Slovenia, whose public pension expenditure will increase by more than 6 percentage points (pp) up to 2060. A large group of countries, including Spain, will record rises of between 3 and 5 pp. Although these may seem like relatively moderate variations at first sight, by 2060 eight out of the twenty-seven members of the European Union (EU) will allocate more than 15% of their GDP to expenditure on pensions, a figure that rises to twenty-two members if we place this threshold at 10% of GDP.

Which factors are putting pressure on public pension systems? The increase in expenditure on public pensions as a percentage of GDP will be greater the higher the proportion of pensioners compared with the working age population (i.e. the dependency ratio); the lower the participation rate; and, lastly, the higher the average pension compared to productivity.(2) In the case of EU countries, and based on European Commission figures, the component that lies behind almost all this increase in pension expenditure over the period 2010-2060 is the dependency rate. In fact, with the exception of the United Kingdom and Ireland, the contribution of the average pension/productivity ratio and employment variables (participation rate) is negative, i.e. their expected trend over the period in question is expected to reduce expenditure on pensions. In short, the major source of pressure is demographic.(3)

This being the scenario in the future, how are public pensions being reformed in advanced countries? A distinction is usually made between two broad types of reform: those affecting specific parameters of the system without altering its essence, and those transforming its fundamental design. Since 2007, the reforms that have been carried out by countries within the Organization for Economic Cooperation and Development (OECD) have been related to changing parameters. This is therefore a generation of reforms with less scope than many implemented in the 1990s and the beginning of the next decade. Countries such as Italy, Latvia, Poland and Sweden introduced «notional accounts», a pay-as-you-go system where pensions are calculated depending on the contributions accumulated, returns generated and life expectancy. Also reforming their systems, countries such as Hungary, Poland, Sweden, Slovakia and Slovenia, among others, complemented their public PAYG system by introducing an additional capitalisation system.

However, since 2007 countries have opted to make selective changes in the system's parameters (see the table below). In particular, the most frequent measure is related to raising the official retirement age, an option justified by longer life expectancy. This measure is being implemented progressively so that, once it has been completely rolled out, the standard retirement age in almost all OECD countries will be sixty-five or older. A second area of action is the modification of incentives for early retirement, aiming to bring the effective retirement age closer to the official one. With the aim of making early retirement much less attractive, many OECD countries have increased the number of years of contributions required to qualify for a full pension or have made extraordinary payments to those delaying their retirement beyond the official age.

A third area where extensive action has been taken is in how pensions are calculated. Various countries have chosen to give less weight to the last salary or the highest salary received during employment. For example, Finland, Poland, Portugal, Slovakia and Sweden have started to use the average wage of a worker's whole professional life, while Austria now calculates pensions based on the best forty years in wage terms compared with the previous figure of fifteen.

A fourth block of measures to adjust parameters concerns the revaluation of pensions. In contrast to the option to link pensions to wage increases, prevalent in many advanced economies, countries such as Austria, Greece, Hungary and Italy have linked this revaluation, entirely or partially, to trends in prices. A fifth type of crucial modification aims to ensure that pension reforms do not affect the lowest pensions too much. The two most usual options are to apply higher revaluations to low pensions (such as in Belgium and Finland) or to make complementary payments for such pensions (Canada, Australia and Korea).

Lastly, and probably the most innovative measure in the current phase of reforms: some countries have started to use «automatic adjustment mechanisms». An initial variation to these mechanisms consists of adjusting parameters such as the retirement age (Denmark), the contribution period required to qualify for a full pension (France and Italy) or the initial pension (Finland and Portugal) to trends in life expectancy. A second group of automatic mechanisms adjust the revaluation of pensions according to macroeconomic variables and those of the pension system itself. For example, Germany takes the pensioner-contributor ratio into account; Hungary and Portugal, GDP growth, and Sweden, the actuarial balance of the system. The «sustainability factor» that is now being discussed in Spain belongs to this kind of mechanism (see the Dossier: «Pension reform in Spain: necessary... but sufficient?» in this Report).

Given the wide range of measures being implemented, the immediate question is whether these will be enough to ensure public pension systems are sustainable. A definitive answer cannot be given at present. As these are very long-term processes, small changes made today in the system could result in notable improvements in the long run. Nevertheless, without permanent changes in the productive model of advanced countries it is difficult to rule out tensions related to pensions. Little wonder that, given the demographic pressures, there are few options beyond prioritising innovation and growth in productivity and ensuring the labour market functions more efficiently.

(2) In more precise terms, what is being presented here is an arithmetical breakdown of pension expenditure as a percentage of GDP as a multiplication of three components: the dependency ratio (proportion of pensioners to the working age population), the ratio of expenditure per pensioner compared with productivity and a component calculated as the inverse of the employment rate (employees divided by the population of working age).

(3) The European Commission has carried out its simulation using a specific model for each country and also making specific assumptions for the different parameters at a national level. In the case of Spain, for example, the hypotheses used for the fundamental variables are as follows: 1.4% growth in productivity as an annual average (2010-2060); moderate rise in the average pension in real terms (1% as an annual average); increase in the employment rate from 62.6% in 2010 to 77.2% in 2060; and an increase in the dependency rate from 47% to 79%, also between 2010 and 2060. 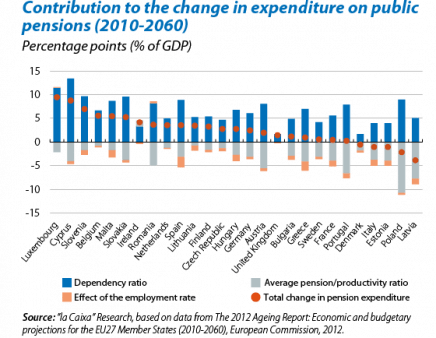