Banking union: all or nothing for European banks

The recent euro crisis has highlighted the fact that a truly integrated banking system is vital in order to guarantee the long-term stability of monetary union. In the words of Yves Mersch, one of the members of the Executive Board of the European Central Bank, a system where «a healthy firm that cannot borrow from a bank in its own country should be able to borrow from one elsewhere - and on similar terms to firms from that country». Constructing banking union must therefore be seen in this respect and it is unlikely to be a fast process that can resolve the problems resulting from the current financial crisis. The pieces that must fit together to complete the puzzle of banking union are numerous and will involve long, complex negotiations between the different Member states.

Three key elements should make up the framework of a solid banking union: a Single Supervisory Mechanism (SSM) so that all banks come under the same kind of supervision; a Single Resolution Mechanism (SRM), with its corresponding Resolution Fund, that dictates how to proceed with banks in difficulty; and a European Deposit Guarantee Fund that backs deposits from any bank irrespective of its country of origin. Naturally, one prior condition to this critical situation is that the rules applied by the aforementioned mechanisms be the same throughout all Member states. Lastly, in order for the SRM and SSM to be credible in the eyes of depositors and investors, there must be safety nets certifying that the guarantee and resolution funds have enough resources to handle systemic crises. This is perhaps the most delicate piece of the puzzle as only the fiscal resources of the different countries can provide such a guarantee and any agreement that involves fiscal transfers between countries tends to result in great caution.

In 2014 significant advances will be made in the regulatory area and the first tangible impacts will be seen on the banking panorama with the ECB taking on its role as single supervisor. In the legislative sphere, the European Parliament and Council must agree, before the European elections, on the harmonisation of national regulations in the area of bank resolution and guarantee funds. Once a common regulatory framework has been set up, the organisational design of the SRM needs to be agreed and particularly who has the ultimate authority to decide on resolving (and, in other words, also dissolving) banks. Given the far-reaching implications of transferring such decision-making power to a supranational authority, this will probably lead to intense debate among the seventeen states in the union. Nevertheless, the ECB's preference to have an SRM as soon as it takes on its function as a single supervisor will apply added pressure for an agreement to be reached.

Regarding the assumption of its function as the single supervisor, the ECB is facing a huge challenge: as from next November it will directly supervise 130 banks considered to be systemic at a European level and, indirectly, another 6,000 smaller banks. In the meantime, the ECB has started an exhaustive review of the balance sheets of the largest banks in order to definitively restore confidence in Europe's banking system and avoid any unpleasant surprises once its mandate begins. Ideally, the outcome should be similar to what happened in Spain after the Oliver-Wyman exercises in 2012: a clear separation between strong and weak banks, as well as the recapitalisation of the latter.

The examination proposed by the ECB has three exercises. The first is an evaluation of key elements related to bank risk which will include, among others, the level of leverage, liquidity and the funding structure of banks. The second exercise will consist of a review of asset quality. In this case, the ECB will check the classification of loans into non-performing and normal, as well as the level of provisions, the value of the assets used as collateral and the valuation of complex or high risk instruments. As common evaluation criteria will be used for all countries, in particular standard definitions for non-performing and refinanced loans, this will represent a huge step forward in ensuring a level playing field between the banks of different countries. Banks operating in countries with relatively lax criteria will therefore have to adjust their level of provisions and, for those starting from tighter levels of solvency, such changes could entail capital requirements. Nonetheless, this exercise will not result in completely equal conditions of competition as it does not include the harmonisation of one of the factors that most alters such conditions: namely how risk-weighted assets are calculated. In this respect, although the ECB's review could help to clarify the origin of the differences that still exist between the calculations used by different banks, we will have to wait for the European Banking Authority (EBA) to complete its work already underway on this area before changes can be made to the regulations, probably not until well into 2015.

Once banks' balance sheets have been validated, the last phase of the examination will consist of a stress test to assess how well they can withstand different stress scenarios. Although the EBA has already carried out such tests, this one is different insofar as it is the first in which the ECB's credibility as a supervisor is at stake. Although the methodology for these tests has yet to be approved, analysts are more than likely to focus on three fundamental aspects: the capital ratio required in the adverse scenario; how sovereign debt will be treated and the impact on the result of excessive dependence on ECB funding. The first aspect is likely to be a key determining factor in terms of the toughness of the tests. With regard to sovereign debt, we are unlikely to see a repeat of 2012 when the quality of this asset was called into question as write-downs were assumed in the adverse scenario. Lastly, in their calculation of a bank's capacity to generate profit, the tests might discount the part that comes from carry-trade.

Whatever happens, the euro area is going «all in» by implementing banking union. Throughout the year it should become clear which banks still have problems and how big these are. Similarly, monetary union cannot allow another crisis in confidence such as the one suffered in 2012, so it is vital to ensure that the consequences of the ECB's examination of banks do not affect their sovereign debt, as happened on previous occasions. The European Council has already made it clear that the use of public resources will involve the application of bail-in rules established in the state's financial aid regulations and that these will come, in the first instance, from national funds. Only once such resources are considered to be insufficient can additional funds be used at a European level via the ESM, which may be injected into the banks directly in the form of capital as from November.

Under such premises, Europe's gamble is unlikely to be perceived as a bluff by the market and 2014 could be the turning point in resolving the financial fragmentation of the euro area, laying the foundations to enable Europe's banking sector to be put in order over the coming years. The system imagined by Mersch will then be much nearer to fruition. 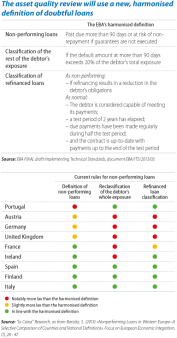