Over the last thirty years, Mexico has made considerable progress in terms of its political and macroeconomic stability as well as in its internationalisation. This has helped the country leave behind its recurring domestic crises and successfully handle the global storm that erupted in 2008-2009. In particular, after a 4.7% drop in GDP in 2009, the Mexican economy grew by an annual average of 4.3% between 2010 and 2012. And although all the evidence points to a significantly lower GDP growth figure in 2013 (in the order of 1.3%) because of the weakness of global conditions and the delay in adopting fiscal stimuli, a gradual reacceleration is likely over the coming quarters, supported by the improvement in demand from abroad (in other words the USA) and monetary and fiscal policies that are now expansionary in tone, pushing this figure towards +3.4% in 2014.

The Debt Crisis of 1982 (when Mexico was forced to stop repaying its external debt) and the Tequila Crisis of 1994-1995 (which led to the devaluation of the peso and resulted in banks and numerous firms going bankrupt) have served as an incentive to promote far-reaching economic, political and social changes in the country over the last three decades. Such changes were crucial to reduce both the external and internal vulnerabilities suffered by Latin America's second strongest economy in the 1980s. The privatisation of public corporations has helped reduce public debt while the Fiscal Accountability Act lies behind the recent moderation in fiscal deficits. On the other hand, the Social Pact reached by business owners, trade unions and the government in 1987, by virtue of which it was agreed to anchor prices, among other agreements, was fundamental in breaking the inflationary spiral in which Mexico had been plunged. Subsequently, the deregulation process, the elimination of subsidies favouring domestic firms, the opening up of the economy and an independent, transparent monetary authority whose priority was to control inflation have also helped to moderate prices. Lastly, improved bank regulation and supervision and the adoption of a flexible exchange rate after the Tequila Crisis are two additional pillars that have underpinned the country's macroeconomic stability.

Although all the aforementioned changes have played their part in shaping the Mexico of today, one of the elements that most transformed the country's economic structure was its decision to open up its trade. Specifically, some of the most radical steps were taken at the end of the 1980s and early in the 1990s. In 1986, Mexico joined the General Agreement on Tariffs and Trade (GATT),(1) comitting to a reduction of trade tariffs as well as non-tariff barriers. This policy in favour of an open, globalised economy culminated in 1994 with the country signing, together with Canada and the USA, the North American Free Trade Agreement (NAFTA). Such commitments have helped to definitively install new maquiladoras or assembly plants, which have gone from employing 180,000 workers in 1984 to over two million today.(2)

These are manufacturing plants (by and large located on the border with the USA) that benefit from privileged tariffs both for their imports of inputs and machinery and for their exports to the USA, and also receive large volumes of foreign investment (mostly from the US).(3) In addition to these tariff and investment-related advantages promoted by the Mexican and United States governments, three other factors also lie behind the «maquiladora boom»: (i) the possibility of fragmenting production processes among different countries (offshoring), (ii) relatively low labour costs and (iii) the geographical closeness of a large economy (in fact the world's largest) with high labour costs. Consequently, Mexican exports went from accounting for 11% of GDP in 1980 to 33% in 2012.(4) Slightly more than half of all exports come from these plants and close to 80% is absorbed by the USA, the main destination for the country's exports.

Undoubtedly, this shift from an economy dependent on domestic growth components to an export-dependent economy explains several resounding success stories. The most outstanding and recent case would be China which, after beginning to open up its economy in the 1990s, managed to maintain average growth rates of 10% per year. But other countries also stand out, such as the four Asian tigers (South Korea, Taiwan, Hong Kong and Singapore) in the 1970s and 1980s or previously the cases of Germany and Japan, in the 1950s and 1960s respectively. However, and in spite of Mexico's achievements, its rates of economic growth have been clearly below the figures achieved by these other countries in their boom years. The fact is that the country's strong dependence on maquiladoras (and, by extension, on some types of offshoring) involves certain drawbacks:(5) (i) specialisation in relatively volatile manufacturing industries, (ii) high sensitivity to the economic cycle of the destination country (the USA in this case) and (iii) strong competition from other countries given the ease of transferring this kind of productive processes.

In fact, international rivalry has posed a serious challenge. The fact that Mexico started to open up its economy precisely at the same time as China, a demographically devastating power with highly competitive wages, can partly explain the delay in the Aztec country's economic rise. But a lack of action by Mexico itself to remedy significant structural problems, particularly the low quality of education, inefficiencies in the labour market and insufficient competition in strategic sectors, has a lot to do with this delay. An improvement in these areas could have minimised the drawbacks of its maquiladoras by stimulating new manufacturing industries with greater value added, which are therefore less volatile and sensitive to the cycle of other countries as well as being more competitive internationally.(6)

The outlook in the medium term, however, is encouraging thanks to several elements converging. On the one hand the Pact for Mexico, which was signed by the three most important political parties in Mexico at the end of 2012, has brought about the desired political consensus that is essential to carry out an ambitious plan of reforms that could provide a valuable boost to the country's growth potential (see the article «A reformist drive is shaking up Mexico» in this Dossier for a more detailed analysis of these reforms and their possible impact). Similarly, wage rises in China, a growing and young Mexican population and a renewed tendency towards nearshoring (fragmentation in nearby countries) compared with the more classic offshoring might give Mexico the chance to finally join the club of success stories among emerging countries with an export strategy.

(2) Of equal importance was the Programme of Temporary Imports to Produce Articles for Export, started in 1990 and through which firms already established in Mexico benefitted from advantageous tariffs when importing inputs and machinery. In 2006, this programme was merged with the maquiladora programme.

(3) Although the origin of maquiladoras dates back to 1965 as part of the Mexican Border Industrialisation Programme, their definitive impetus came at the end of the 1980s when Mexico joined the GATT. Moreover, although most are currently still located on the border, they can actually be set up in different parts of the country.

(4) Where close to 96% of these exports are manufactured goods and petroleum derivatives. 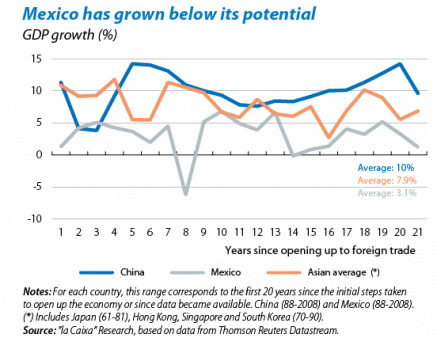