The crisis that has been beleaguering us since 2007 has highlighted the fact that the capital held in reserve by some institutions during the economic boom was not enough. In many cases the losses made have been greater than the available equity capital and significant recapitalizations have been needed. Some institutions have been forced to resort to public capital to cover this deficit.1 Ceteris paribus, in order to have avoided the use of public resources, their pre-crisis capital should have been 30% higher.

Under such circumstances, the Basel II regulation on capital was reformulated in order to strengthen the system and make it more stable. The reform undertaken, known as Basel III, has focused on raising the level and quality of equity, the numerator of the regulatory capital ratio, but has neglected any in-depth revision of the denominator, namely risk-weighted assets. The weighting of assets according to risk remains almost unaltered, in spite of the fact that it is precisely this factor that has rendered the regulatory capital ratio a poor indicator of the real risk assumed by institutions.

To analyze this assertion in greater detail, we shall look at an algebraic breakdown of the regulatory capital ratio, in line with the following expression:

The first factor, the ratio of non risk-weighted capital, is a fairly objective measure and also enjoys a considerable degree of harmonization, which will be further strengthened through Basel III. Differences across systems are therefore informative per se and provide complementary information to the regulatory capital ratio. The graph below shows that the higher regulatory capital ratios of Switzerland, Germany and France compared to Spain are supported by lower ratios of non risk-adjusted capital. In Spain, this ratio almost doubles that of Germany.

The second factor, the risk profile, provides an estimate of the inherent risk of assets. This measurement seems to have its limitations, as historical evidence highlights. The last graph illustrates its poor performance as an early indicator of which institutions are going to encounter real solvency problems.

In addition to the typical problems of the econometric models used, the bulk of the evidence suggests that the risk profile is contaminated by other elements that do not necessarily reflect a higher real risk. The risk profile should be related only to the business model and the macroeconomic and institutional environment, insofar as these affect asset quality. However, in fact it is also conditioned by other factors that do not necessarily reflect a real risk differential, such as supervisory practices or the discretion of institutions when implementing capital management models. This means that, although Spain is at the top of the list based on risk profile and Switzerland, Germany and France bring up the rear, it's still not clear which bank system concentrates the greatest risk.

A priori, differences in the business model should account for most of the variation in risk profiles. The Bank of England2 has analyzed this issue in its Financial Stability Report and estimates that changes in the business mix of the country's largest banks between 2008 and 2010 explain approximately 50% of the cumulative decrease in the average weighting of assets according to risk.

M. Ledo also analyzes this issue in a recent study,3 stating that, in 2010, credit risk (credit risk related RWA divided by total assets) accounted for more than 80% of the total risk profile. Institutions with a lower proportion of loans to assets have lower risk profiles. This is the case of German, Swiss, French and UK institutions. The timescale also reflects that a reduction in risk profile is accompanied by reductions in the relative weight of loans to assets. These findings highlight the importance of the business mix but raise serious doubts concerning one aspect of the calculation of RWA: assigning a higher risk weighting to loans than to the trading book. In the light of what has happened over the last four years, this is an issue that should be rectified without delay. Basel 2.5 is an initial step forward in this direction.4

Discrepancies in the risk profile which are not explained by differences in the business model can be attributed to the macroeconomic and institutional framework.5 Some examples of differences in the institutional framework that have a direct effect on risk profile can be found in France and the United States. In France, the existence of Crédit Logement, an agency that guarantees mortgage loans, reduces the probability of default on these loans, pushing the risk weighting below the average figure. In 2009 this number was around 10% for French institutions whereas it reached 20% for Spain and the United Kingdom. In the United States, the accounting principles applied (GAAP-US, Generally Accepted Accounting Principles) may explain most of the differences with Europe. In 2010, the assets of JP Morgan would have been up to 68% higher under the International Financial Reporting Standards (IFRS) used in Europe; i.e. its risk profile would have gone from 55% to 33%.

However, even after taking all these elements into account, there are still some differences that arise due to the discretion that can be exercised by supervisors and institutions. The transposition of Basel II into national legislation and, particularly, the process of validating and supervising internal management and risk measurement models (IRB models, or the Internal Ratings Based approach) introduce some degree of discretion and are a source of discrepancies in risk profiles.

In a simulation carried out in 2009, the British Financial Services Authority (FSA) created a portfolio of hypothetical investments and asked some of the country's largest banks to determine the associated RWA based on their IRB models. The results were highly disparate and yielded differences in the regulatory capital ratio of up to 2 percentage points.6 Some of the differences might be due to the effectiveness of policies to recover deteriorated assets, although probably not all of them. Moreover, national supervisory practices vary in many different areas. Some examples are the time horizon for calculating the probability of default (through the cycle, point in time or a hybrid of both), how problematic assets are treated or the differing quality requirements to validate the models.

In short, behind the differences observed in the risk profile we can find a different real level of risk associated with certain business models and macroeconomic and institutional factors. However, we can also find other distorting factors that should be minimized. In a context of tougher capital requirements, it is essential to ensure coherence in calculating the RWA between institutions and jurisdictions, preserving the differences caused by different effective levels of risk and minimizing differences due to the discretion exercised by the institutions themselves and the supervisor. Only in this way can we avoid regulatory arbitrage or granting competitive advantages to some institutions.

Several proposals are being planned with this aim in mind. Many believe that Pillar III of Basel II, which requires information to be disclosed to the market, should be reinforced to make institutions easier to compare. Similarly, many others defend the use of the ratio of non risk-weighted capital as a complementary tool to the regulatory capital ratio, so as to take advantage of its objectivity and high degree of harmonization, in line with what is established in BIS III.7 For the moment, the initiative adopted by the Basel Committee aimed at encouraging international coordination among supervisors stands out. In Europe, the European Banking Authority (EBA) will be responsible for pushing this project forward satisfactorily.

(1) Calculated based on Bloomberg's information regarding public recapitalizations (19 institutions).

(4) Basel 2.5 (CRD III) introduces modifications to several mathematical models used to measure and estimate the impact on capital of future losses in the trading book and resecuritization. Directive 2010/76/EU of the European Parliament and of the Council, 24 November 2010.

(5) Includes, among others, regulatory aspects related to procedures to foreclose mortgages, LTV.

(7) In 2010, the European Commission approved Requirement Directive (CRD) IV to start up the process known as Basel III within the area of Europe's single market. This initiative contains a maximum leverage ratio, calculated as capital over total assets, subject to supervisory review. However, its implications will be closely scrutinized before the possible transformation of this ratio into a binding requirement (in 2018). 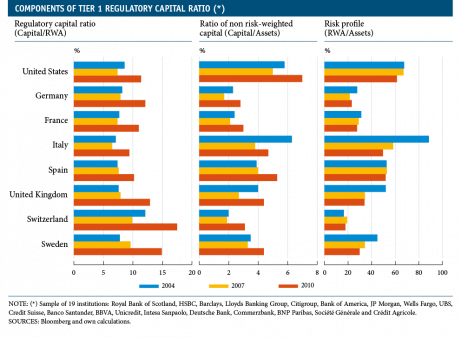 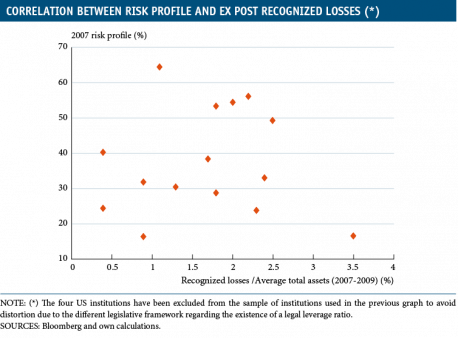