The crisis resolution framework: a first step towards banking union

One of the most promising bank reform initiatives is the creation of the so-called crisis management mechanisms. Essentially, the idea is to create a regulatory framework that helps the process of orderly bankruptcy for a bank which, due to the characteristics of the financial system, requires more time and resources than a traditional bankruptcy. The aim is to adapt the process so that a resolution authority can rule that an institution is no longer viable before its insolvency is reflected on its balance sheet and, from then on, supervise a process that leads to the orderly wind-down of the institution's assets or, in the best case scenario, the creation of a new institution with the still viable part of the business.

A good crisis management framework should minimize the cost for society of bank bankruptcy, without this jeopardizing financial stability. To achieve this, the framework needs to contain four basic elements.

Firstly, some preparatory work in financial institutions is needed, particularly in systemic ones, to ensure that, should the need arise, they can be wound down at a minimal cost and without harming the system's stability. This work includes drawing up living wills with information on the procedures that should be followed to achieve this, as well as possible reorganizations of groups that are too complex, in order to make them easier to dismantle.

Secondly, there should be a resolution authority capable of ruling that an institution is not viable, ensuring the continued provision of basic services (deposits and the payment system) and appropriately distributing losses among the shareholders and creditors. To this end, the authority should be able to replace the management team, sell or recapitalize the institution without shareholder consent and restructure its debt. Basic services could continue to be provided by a bridge institution created with viable parts of the business and that would subsequently be sold, or by using a good bank - bad bank model. However, the crucial and most delicate element is the so-called bail-in tool, whose aim is to involve creditors in such losses. This instrument helps to establish a write-down of the principal the institution's creditors are entitled to receive or, alternatively, to turn this into shares in order to recapitalize the institution. This should increase creditor sensitivity to the cost of failure and, consequently, encourage them to monitor the risk being taken by the institution more closely.

The third element is related to the financing of institutions under resolution. The orderly wind-down of a financial institution usually requires an injection of funds, for example to ensure the bridge institution has liquidity while its sale is being finalized. Maintaining a resolution fund, financed ex ante by institutions as a whole, is a good solution that ensures the necessary resources are immediately available. On the other hand, the deposit guarantee scheme (DGS) must also contribute resources to the resolution process, as part of the liquidity is required to maintain banking operations for the institution's depositors. The most suitable system would be to establish a contribution equivalent to the loss that would be suffered by the DGS if an ordinary bankruptcy took place. Lastly, if these resources are not enough, the authority should establish a mechanism to recover any injection of public money ex post. The aim of this is to ensure that taxpayers contribute as little as possible.

The last element in a good crisis management framework is the design of the intervention procedure. It is vital to detect any weakness in institutions early enough to correct these and avoid tensions emerging in the system. Given the amount of information at its disposal, the supervisor is in the best position to fulfil this role and should have sufficient powers to carry out early intervention at the merest sign of weakness (see the diagram below). If these weaknesses get worse in spite of intervention, then it becomes vital to prevent situations of excessive uncertainty that stop the financial system from operating properly, as well as determining whether the institution can be viable on its own within a reasonably short period of time. For this task, it might be a good idea to employ a resolution authority other than the supervisor, as there is the risk that the latter might delay taking a decision too long, either because its frequent interaction with the institution leads it to be too indulgent or because it prefers not to recognize its errors in the previous phase.

Based on these elements, in July the European Commission presented its proposal for a crisis management framework(1) which has been interpreted as a first step towards banking union. However, in spite of the harmonization this entails and the elements of coordination between Member states it introduces, the current proposal is not enough to achieve such a union. As an illustration, consider the case when a Member state has used up its entire resolution fund. The proposal forces the funds from the rest of the countries to loan it some of their resources. However, this does not break the link between bank risk and sovereign risk as the cost of the resolution continues to be met by the Treasury of the Member state while the latter cannot recover this cost via further contributions from its financial system. Another example of the proposal's shortfalls is the rule regarding intragroup cross-border financial aid. Member states will have to allow institutions that belong to a cross-border group to provide financial aid to parts of the group in another Member state, although they will require authorization from the national supervisor to do so. Consequently, the coordination problems between countries that have worsened the crisis of some groups have not been entirely eliminated, as the proposal continues to leave the door open to protectionist attitudes, such as ringfencing assets.

True banking union will not be achieved without a single resolution fund, possibly linked to a single deposit guarantee scheme, and supported by some kind of solidarity mechanism between countries to provide public resources should this be required. Logically, in this case it would be impractical to maintain national resolution authorities as we must not forget that these would have the power to decide how losses are shared between shareholders of the domestic bank, creditors and European taxpayers. However, the creation of a Europe-wide resolution authority is a complex matter. On the one hand, it will entail Member states giving up some sovereignty in the area of redistribution and collection. On the other, the aim of early intervention in institutions close to bankruptcy will necessarily mean that decisions will have to be taken quickly based on imperfect information and with great repercussions, both in political and economic terms. This will require certain ex post control, perhaps political, of the authority's decisions, which means it might not be a good idea to add this function to the supervisory role recently assigned to the European Central Bank.

Given the above, it does not look like banking union will be achieved in the short run. Nonetheless, the bail-out of Spain's banks could end up laying the foundations for a European resolution authority. Ultimately, the bail-out entails a decision regarding which European mechanism should be used to inject funds in banks, and a large number of the conditions imposed are in line with the principles of the crisis management mechanism proposed by Brussels. Perhaps this might provide the elements and experience required to draw up a route map in order to progress towards banking union with firm steps.

(1) EU framework for bank recovery and resolution, Proposal for a Directive, COM(2012) 280/3. At the time of writing this box, the Spanish government is in the phase of preparing a new crisis resolution framework for Spain's financial system that responds to this Directive's principles. 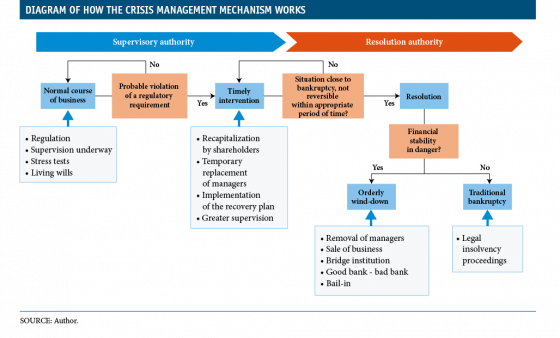