A lower cost of equity for banks

Cost of equity (COE) is the return a shareholder can expect from funds invested in a company. These expected returns obviously have an effect on companies' financing costs and managers need to take them into account to value investments and efficiently assign resources. In the case of financial institutions, a higher cost of equity will tend to reduce the supply of credit and push up interest rates. Moreover, an environment with regulatory pressures, such as that of recent years, may have encouraged banks to improve their solvency by reducing the size of their balance sheets.

In spite of its importance, COE is not directly observable and therefore difficult to quantify. Only half Europe's financial institutions estimate the cost of equity in their planning, as shown by the latest survey carried out in June by the European Banking Authority (EBA). Most banks place their cost of equity at between 10% and the 12% and acknowledge a certain downward trend in the last few quarters. Nonetheless, only 30% of the banks believe that their current earnings are covering the COE. The adverse trend in the share prices of many banks therefore comes as no surprise.

It is reasonable to assume that the return demanded by shareholders will depend on the risk they assume. We can therefore infer that the COE must be at least the same as the return offered by assets considered to be risk-free (such as German public debt), plus a premium to compensate any risk assumed. The capital asset pricing model (CAPM), one of the most widely used for calculating the cost of equity, is based on this assumption. This approach defines COE as the sum of the return on the risk-free asset plus a premium for market risk, adjusted by the specific risk (or beta coefficient) of the industry or company in question. The beta coefficient is a risk measure that compares the volatility of a company's share value with the market's typical variability. Betas higher than one must be interpreted as a specific risk higher than the market risk and, to compensate this, the cost of equity of a company or bank must also be higher. In spite of being criticised due to its oversimplification and other factors, the Federal Reserve1 uses the CAPM as an acceptable estimate of bank cost of equity and does not include other aspects in the model which might be deemed important, as they are not very statistically significant. Among others, fiscal impact, the institution's leveraging or the sector's degree of concentration, as these are not very statistically significant.

Following this methodology,2 our estimates place the average cost of equity of Europe's financial institutions at around 11% in mid-2014, in line with the level given for the sector in the EBA survey. However, the return demanded has fluctuated substantially over the last few years. Before the financial crisis, cost of equity remained very stable at 8%-9% while yields for the equity of European banks were above 15%, thereby exceeding investors' expectations. This scenario was cut short in 2008 when the cost of equity started to rise, briefly interrupted by the incipient recovery in 2010, until it went above 16% in 2012, a year affected by strong tensions in the sector and the sovereign debt crisis.

Variations in COE have important consequences for the interest rates demanded by banks for their loans. One revealing example consists of analysing how much capital is required from financial institutions when granting loans to enterprises. Assuming a minimum capital requirement of 8% and that the risk weighting for this type of asset is 75%, the capital requirement comes to 6%; i.e. banks must allocate at least 6 million euros of equity to grant a loan of 100 million euros. An increase of 7.6 p.p. in the COE, as happened for European banks between 2007 and 2012, would therefore lead to a 0.46 p.p. rise in the cost of credit. On the other hand, the 5.5 p.p. drop in the COE that has occurred over the last two years would reduce financing costs by 0.33 p.p.

This fall in the cost of equity since 2012 is entirely due to the drop in the stock market risk premium and to lower interest rates for the risk-free asset, this last factor being very much encouraged by the ECB's expansionary policies. However, the specific risk of the financial sector (the beta coefficient) has risen almost non-stop in the last ten years. A beta that was below one in 2004 has now practically doubled and reached a level close to 1.8. This growing volatility of European banking relative to the market, seen as higher specific risk, is in line with the fact that the industry has been one of the most heavily affected by the financial crisis and economic recession. However, apart from banks' problems in this adverse cycle, regulatory uncertainty has created even more doubts regarding how banking business will develop. Moreover, the regulatory reforms introduced to lessen implicit public guarantees may have also contributed to a perception of greater risk on the part of shareholders.

It is also useful to note that this increase in the beta coefficient has taken place in spite of the reduction in bank leveraging, when the regulatory framework was attempting to do just the opposite. Since 2010, regulatory pressures (especially Basel III) have resulted in a 26% reduction in the leverage ratio. It would be reasonable to conclude that, when the share of equity increases in a bank's balance sheet, the risk borne by an investor is less and, consequently, the return demanded should also be lower. However, the growth in the beta coefficient did not start to moderate until the end of 2013, and then only very slightly. One possible explanation is that, although the capital buffer has indeed been increased to cover possible losses, the incentives to assume risk may have also changed.3 Some theoretical arguments point to banks incurring more risks that cannot be verified by the supervisor to maintain earnings on capital and offset the tougher regulatory requirements. In this respect, empirical studies fail to provide conclusive proof that greater solvency requirements reduce the real risk borne by banks. The impact of less leveraging on the cost of equity is therefore not obvious.

In any case, bank risk will probably consolidate and even diminish in the medium term thanks to the publication of the results from the ECB examinations in October and the establishment of the regulatory framework. At a time such as the present, with interest rates at an all-time low, cost of equity may return to its levels of 2007-2008 and reach 9%. In short, the falling cost of equity capital, a reduction that may intensify in the medium term, should encourage banks to grant loans and halt their deleveraging by reducing their balance sheets. Good news for the real economy. 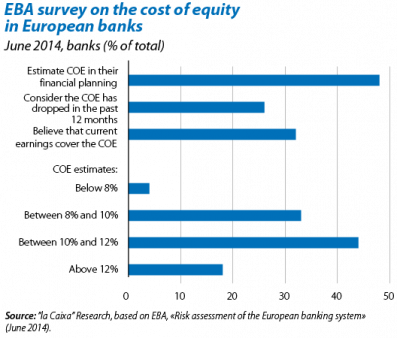 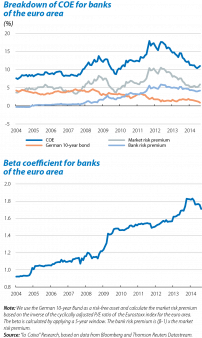