2016: challenges and opportunities in a demanding global financial environment

The divergence between the monetary policy applied by the US on the one hand and by the euro area and Japan on the other will undoubtedly be a very important factor for developments in the financial markets in 2016. The speed adopted by the cycle of interest rate hikes in the US will be particularly important, although we expect this to be slow. A second, highly influential factor for the coming year will be how China's economy performs. Attention will mainly focus on the Chinese government's ability to handle the economic slowdown and transition. Given these factors, the outlook for financial assets in the advanced world (stock and bond markets) is reasonably positive for the coming year. The acceleration in world growth, which we expect to reach 3.6% in 2016, and the continuation of large amounts of liquidity globally will provide a considerable boost. Nevertheless, the high prices of many financial assets suggest the expected rates of return over the next 12 months will be significantly lower than those recorded in the last five years, both for risky assets and particularly for sovereign bonds.

Thanks to highly accommodative monetary conditions, financial asset prices have enjoyed a favourable environment over the last few years but in 2016 this pattern will probably
be tempered by investors' growing focus on underlying macroeconomic fundamentals (growth and inflation) as drivers of financial asset prices and considerations such as companies' ability to generate earnings will become more important. It is therefore useful to determine just how high these international financial assets have risen.

A preliminary diagnosis allows us to draw three conclusions. Firstly, prices in the stock and corporate bond markets in the advanced bloc are still within the higher range of their respective historical series, especially in the US and this will tend to limit the expected rates of return for both types of assets over the coming quarters. The outlook for stock and corporate bond markets in the euro area is more encouraging thanks to less inflated valuation ratios than in the US and the fact that the region is still in the early stages of its economic cycle. The key factors supporting the recovery in earnings in the euro area should be the euro's depreciation, which we expect to continue in 2016 although not as sharply as in 2015, continued low energy prices and highly favourable financing conditions thanks to the continuation of the ECB's bond buying programme.

The second conclusion is related to the high asset prices (and resulting low expected rates of return) dominating the whole spectrum of public debt in advanced countries. In fact, these valuations have been distorted by successive sovereign bond buying programmes (QE) adopted by the world's main central banks over the last few years. In the US the imminent start of the cycle of interest rate hikes will help to gradually normalise prices in the Treasuries market while, in the euro area and Japan, nominal interest rates will remain very low. However, towards the end of 2016 investors are very likely to believe that asset purchases in the euro area are coming to an end, resulting in a gentle upward trend in the region's sovereign yields. According to the forecasts of CaixaBank Research, the yield on 2-year US bonds is expected to increase by about 100 bps next year, in contrast to the 30 bps rise expected for 2-year German bonds, up to 1.85% and 0.0% respectively.

An analysis of the emerging countries provides us with our third conclusion. Unlike the situation in the advanced markets, prices in the emerging stock and corporate bond markets have remained very depressed, dropping to levels only seen during periods of great uncertainty such as the Asian financial crisis in 1997 and the Great Recession in 2008. Undoubtedly the tightening up of external financial conditions for most emerging economies, plummeting commodity prices and internal imbalances yet to be corrected by some emerging countries pose considerable challenges. However, we believe that the balance of risks for the emerging bloc can be handled (see the article «Outlook and doubts for the emerging economies» in this Dossier for further discussion). For this reason, the macroeconomic situation we expect for this heterogeneous group of countries in the coming years is generally positive and we therefore predict a relatively favourable outlook for emerging financial assets and their currencies. However, the extent to which this scenario will come about will vary and depend on international investors gradually recovering their confidence, something which will surely become more evident in the second half of 2016.

The constructive panorama for international markets in 2016
is not without risk. One initial source of uncertainty comes from how successfully the Fed will be able to manoeuvre the normalisation of interest rates. Several issues could cause problems: for example, the appearance of a negative shock that interrupts the expansionary phase of the US economy, a potential delay, caused by the country's political situation in an electoral year, in the Fed's plans to toughen up monetary conditions, or a communication strategy by the central bank that is vague or erratic. Although unlikely, the effects of such events could be potentially disruptive for global financial markets. Should a negative shock occur in the US economy, long-term sovereign yields would plummet while, in the last two cases, they would increase. A second potential source of instability comes from the risk associated with a change in expectations of a deflationary environment being maintained for a long time (see the graph). The tiny inflation risk premium shown by the US bond market could reverse its downward trend abruptly should US price and wage indicators post surprisingly high figures. This would lead to an upswing in Treasury yields while the impact on stock markets would be less adverse a priori. Should this risk come about, there would be a marked deterioration in the emerging financial environment as capital outflows would probably increase and emerging currencies depreciate.

Lastly, China represents another source of financial risk for the coming year. Should the slowdown in the Chinese economy become more pronounced (the so-called hard landing), this would initially lead to sharp increases in global risk aversion, substantial declines in higher risk markets and investors turning to safer assets. At the same time the growth prospects of the emerging economies would be particularly hard hit which, in turn, would make the emerging markets unstable. Nonetheless we believe that this risk scenario is unlikely given that the Chinese authorities would not hesitate to increase the scope of their monetary stimuli to put a stop to such tail risks.

In short, the trend in the international financial environment in 2016 will be characterised by risky assets outperforming sovereign debt in the advanced countries as well as lower yields than in preceding years for both types of assets. Although we do not expect the doubts hovering over the global environment to upset the positive scenario predicted, deteriorating liquidity in a large number of markets will amplify any risk-off episodes that are likely to occur in 2016. Caution will therefore be a valuable companion on our journey throughout the coming year. 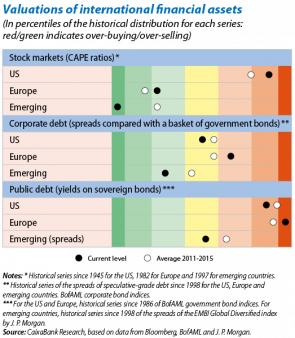 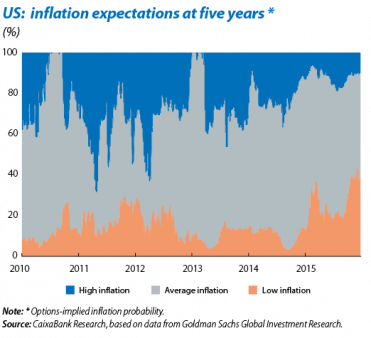