The macroeconomic environment and monetary policy are affecting the profitability of banks in the euro area. On the one hand the slow economic recovery and private sector deleveraging in some countries are limiting growth in the volume of loans and funds. On the other hand low interest rates (even negative in some cases) and continuing high costs as a result of the crisis (especially due to loan loss provisions) are also pushing down bank profits. Given this situation, the return on equity (RoE) for European banks stood at 5.0% on average in 2015, almost double 2014's figure (2.7%) but still far from the average since 2000 (10.1%).

Another factor that partly explains this low profitability is the increase in regulatory capital requirements. Since 2009 the common equity tier 1 ratio (CET1) has gone from 9% to almost 14% in 2015. This lower leveraging has helped to reduce the RoE by 1.6 pps.

In theory a larger share of equity in the structure of banks' balance sheets should reduce the risk perceived by shareholders. As these are the first to absorb losses, if a bank has a low capitalisation the risk of losing a large part of its equity is much higher than with a higher level of capitalisation. Moreover, a bank's management will tend to be more cautious if the shareholders have more capital at stake. Consequently, when investment in bank shares is perceived as less of a risk, the returns demanded by investors or the cost of equity (COE) should also be lower. But this has not been the case.

Using the Capital Asset Pricing Model or CAPM,1 we estimate a COE for European banks of 9.7% for 2015 and 10.0% for the historical period of 2000-2015. Although these figures are similar, a breakdown of the COE between the risk-free interest rate, the market risk premium and the banking sector risk premium reveal significant changes in the contribution made by each of these components. The risk-free interest rate is now approximately 3 pps below its historical average while the market risk premium has risen by almost 1 pp and the bank risk premium has increased by 1.7 pps.

Low risk-free interest rates are a result of the current expansionary monetary policy. Therefore, as monetary policy normalises, the cost of bank equity should rise if, in turn, the bank risk premium does not alter. So when might the bank risk premium fall? Why are banks still perceived as a risky investment when the aim of regulatory efforts is precisely the opposite?

As discovered in a recent survey carried out by the consultancy firm PWC2 on the risks faced by banks, the macroeconomic environment represents one of the main concerns for banks around the world and especially in Europe. In this respect, investors may be discounting the fact that the current environment of low economic growth (accompanied by low interest rates and weak growth or stagnation in business volumes) is structural, which would permanently affect banks' business model. Another trend which, in addition to opportunities, also poses risks and uncertainty for traditional banks is digitalisation insofar as profits could be eroded with the emergence of new technological rivals and because it is not certain that all banks have enough innovative capacity to continue offering their customers competitive products and services (see the article «Online marketplace lending: an alternative to bank financing?» in this Dossier).

The second risk highlighted in the survey is regulatory. The regulatory framework has yet to stabilise and measures and requirements still need to be defined that have an as-yet uncertain impact on the sector's bottom line. Logically investors will demand a higher expected return on equity until such sources of uncertainty are resolved. On the other hand the cost of equity may also have risen due to the practical disappearance of implicit public guarantees (the «no bail-out» principle). There are also fears that this very pressure on profits will lead some banks to take risks that cannot be accurately observed by supervisors or shareholders, resulting in a higher COE demanded for the sector as a whole.

In any case, even though such risks and uncertainties may be resolved favourably and this helps to lower the bank risk premium, there is no guarantee that such a reduction will offset the normalisation of risk-free interest rates and that the COE will fall to below its pre-crisis level. In fact most analysts place its medium-term rate at around 10%, its long-term average. The current levels of bank profitability will therefore have to increase considerably to pass this threshold. According to December's survey by the European Banking Authority (EBA), fewer than half the banks stated that their profits in 2015 were enough to cover the COE. Persistently low profits for banks in the euro area reduce the organic accumulation of capital and make it difficult to attract this externally, limiting the growth of bank financing, the main financing mechanism for the European economy (see the article «The banking sector and the capital markets: union creates strength», in this Dossier).

Improved profitability should be based on various levers. On the one hand, adapting the business model to low interest rates, which reduce income from interest, and an increasingly digital environment. There is no doubt that strict cost control will also be vital to bolster banks' bottom line. More fragmented and less efficient banking systems can also boost their profitability via national consolidation that reduces excess capacity. Crossborder acquisitions, within the banking union, of relatively weak banks or those with room for improvement in terms of efficiency may also serve to increase the profitability of the system as a whole (although, at present, pan-European economies of scale are not significant given the regulatory, institutional and cultural differences between countries). In summary, there are many different ways to improve profitability and be able to reward bank shareholders satisfactorily and sustainably. Only the banks that accomplish this will be able to say they have finally left the crisis behind them.

2. See «Banking Banana Skins 2015» by the CSFI and the consultancy firm PWC. 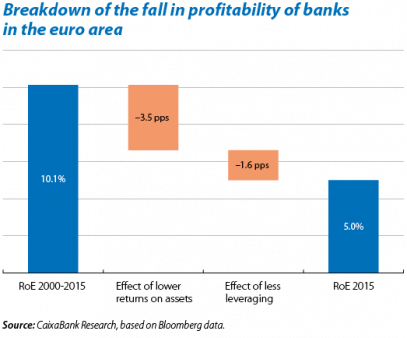 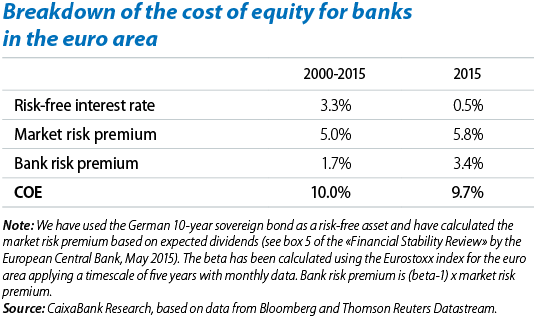