How can well-being be compared across countries?

Without wishing to underrate Scandinavian «hygge»,1 some might be surprised at the Nordic countries leading the well-being rankings, or at Spain coming a modest 34th, far below the US and Germany (ranked 14th and 16th, respectively).2 The problem is that comparing standards of living across countries is no mean feat. In fact, to date no attempt at measuring well-being has been free from criticism.

The Ranking of Global Happiness is no exception. This is based on questionnaires in which each person rates their degree of happiness from 0 to 10. It does not take into account, for example, the fact that certain countries and cultures may be happier than others even under the same economic and social conditions. In this respect, an OECD article3 estimates that cultural impact could lie behind up to 1.5 points of the ranking from 1 to 10 reported by individuals. The authors note that cultural influence is particularly high in Nordic countries, English-speaking countries and some countries of Latin America.

In the academic world, one of the latest attempts at constructing a comparable measurement of well-being across countries and time has been carried out by Jones and Klenow. They propose a well-being indicator that includes determinants such as consumption, leisure, mortality rate and inequality.4 One of the innovations of this well-being indicator is that it uses microeconomic data from 13 countries to weight the different elements within the indicator according to the preferences of citizens as a whole.

The third chart, taken from the article by Jones and Klenow, shows that, in spite of the Western European countries analysed5 having, on average, a GDP per capita of around 67% of the US, once the greater leisure time, longer life expectancy and lower levels of insecurity enjoyed by these countries are taken into account, the gap with the US narrows to the point that the well-being of European countries is just 15% lower than the US. The article also states that the level of well-being of developing countries is worse than would be suggested by their GDP per capita as a consequence of their shorter life expectancy, lower consumption and greater inequality.

In spite of the advances made by this article in measuring well-being, it should be noted that the index proposed by Jones and Klenow assumes that all countries value the same aspects in terms of happiness, a hypothesis which, as has been mentioned above, does not actually reflect reality. As the authors themselves admit, their proposed measurement of well-being does not take other factors into account which also contribute to people’s happiness, such as the quality of the environment, homicide rate, political freedom and intergenerational altruism.

Just how important is each factor for our happiness? Ideally, since happiness is not a single measurement, the relative weight of each factor should be calculated based on a representative survey that estimates the most important determinants of well-being for each society. Academic literature suggests that determinants of well-being are not necessary equally important across countries. For instance, Alesina et al. estimated that inequality has a larger negative effect on well-being in Europe than in the US.6

Aware of this limitation, the OECD provides a tool that compares the relative weights of the 11 factors that make up its index. A simple exercise shows us that, irrespective of the relative weights, Nordic countries tend to remain at the top of the ranking while changes in these relative weights result in changes especially in the middle and lower sections.

For instance, if the relative weight of the 11 indicators is the same, Norway heads the index ranking, the US is 9th and Spain 19th. However, if we put health, education and the work-life balance as the most important factors, namely those factors considered to be the most important by index users in Spain and also in the US and Norway,7 Denmark would lead the ranking (followed by Norway), the US would fall to 13th and Spain would remain 19th.

In conclusion, although there are drawbacks to all measurements of well-being, the Nordic countries tend to rank better in all of them, reminding us that we should still look to them as a benchmark.

1. «Hygge» is a Danish adjective associated with personal well-being created via the small things in life, such as the cosiness of a home and looking after yourself and others.

5. The article includes the UK, France, Italy and Spain.

7. These findings are based on the answers given by 3,200 people visiting the Spanish Better Life Index website, 1,600 visitors to the Norwegian website and 18,200 visitors to the US website. They are therefore merely indicative and do not represent the whole population. 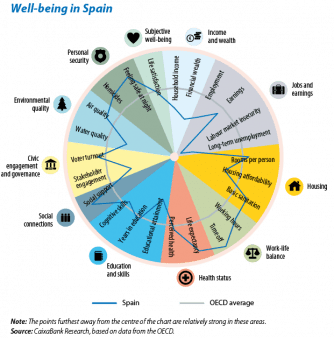 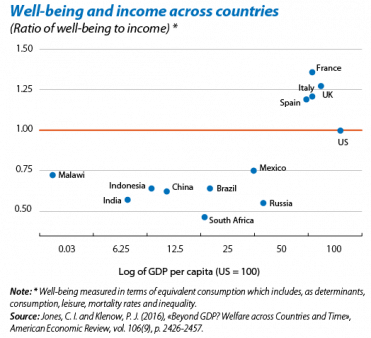