The pace of growth intensifies

Private consumption and investment: the engines of growth. Details of the breakdown of GDP for Q4 have confirmed that the Spanish economy grew by 0.7% quarter-on-quarter (0.5% in Q3) thanks to the increase in private  consumption and investment which offset lower public consumption. These good figures for Q4, slightly better than expected, and the positive business indicators for January show that recent positive shocks (falling oil prices and the euro's depreciation) are tending to have a greater impact than expected on economic activity. The effect of these temporary factors, which have momentum, has led us to revise upwards both our growth forecast for GDP in 2015, to 2.5% (+0.2 pps) and also our forecast for 2016, to 2.3% (+0.2 pps). These forecasts are in line with the ones published at the beginning of February by the European Commission, which places growth at 2.3% for 2015 (previously 1.7%) and at 2.5% for 2016 (previously 2.2%).

The foreign sector will gradually add to growth. The good performance by domestic demand lies behind almost all the growth in GDP in Q4 but it should also be noted that, for the first time in this period of recovery, exports will no longer deduct from growth. However, for 2014 as a whole, in which GDP growth reached 1.4%, the contribution made by domestic demand was 2.2 pps while the contribution by exports was negative, namely –0.8 pps. We expect the euro's depreciation and the recovery of the euro area to boost exports throughout 2015 so that the foreign sector
will gradually improve its contribution to growth, although this contribution will be limited as imports will also continue to grow strongly, in line with the trend in domestic demand.

The data from the National Accounts system confirm the good labour market trend in 2014 Q4. Growth in full-time equivalent employment was 0.7% quarter-on-quarter, in line with the forecasts after the positive LFS data for Q4, indicating that the good performance by activity is being passed on to the labour market. With this figure, the annual rate of change stands at 1.2% in 2014, representing a net creation of 392,000 full-time equivalent jobs. The figures also show that wage moderation continued to support improvements in competitiveness. Wages per employee remained constant in Q4 with 0.0% change quarter-on-quarter. The fact that wage rises contained in collective agreements have remained stable at 0.6% year-on-year for more than a year suggests that wage moderation will continue although the agreements that are due to be made between employers and trade unions in the near future will be crucial for the future trend in wages.

Job creation continues in 2015. The number of registered workers affiliated to Social Security grew in January (12,613 seasonally adjusted), accumulating 18 consecutive months of increases. The negative trend in agriculture obscured the improvement recorded in the rest of the sectors, which speeded up their rate of job creation. For its part, registered unemployment fell by 42,723 people, seasonally adjusted. Growing employment expectations, especially in industry, show that the revival in the labour market will continue to spread through all sectors. It therefore seems that the rate of improvement in the labour market is intensifying in Q1, partly due to the positive impact of the above-mentioned supporting factors, and we have therefore improved our employment growth forecast for 2015 and 2016 by 0.1 pps, up to 2.3% and 2.0%, respectively, as well as revising downwards the unemployment rate by 0.1 pps, also for both years.

Domestic demand remains firm. The strength of private consumption, which grew by 0.9% quarter-on-quarter in Q4, looks like continuing in 2015 thanks to growing employment and better financing terms. The consumer confidence indicator stood at –1.8 points on average in January and February, a clearly higher figure than the –9.6 points posted in Q4. Regarding investment, the rise in the industrial confidence indicator (–4.4 in January and February compared with –5.3 in Q4) and the upswing in the PMI manufacturing index in January (54.7 compared with 53.7 in Q4) suggest the industrial sector is performing well, which would be compatible with further growth in capital goods investment, up by 1.8% quarter-on-quarter in Q4. The change in trend for investment in construction has also consolidated, posting its first quarter-on-quarter positive growth in 2014 Q2 (residential investment in 2014 Q3).

The real estate sector is showing signs of improving, both in demand and supply. After six years of adjustment, house sales rose by 2.2% in 2014 compared with the previous year (319,000 compared with 312,000), although the actual number of transactions is still very low. On the supply side, new building permits, up by 4.0% year-on-year on average in Q4 (cumulative over 12 months), suggest that the recovery in activity will gradually gain traction. In addition to the rise in investment in construction, employment in the sector also grew in Q4, specifically by 3.3% year-on-year. House prices shrank by 2.4% in 2014 as a whole but grew by 0.5% quarter-on-quarter in Q4. This was the first positive growth since March 2008, from which date prices had fallen by 30%. It therefore seems that 2014 was the year when the real estate sector bottomed out. The outlook is favourable for 2015: we expect both construction activity and prices to continue their recovery, supported by improvements in activity, in the labour market and in financing terms, but at a very moderate rate due to the high stock of residential properties still to be sold. Nonetheless the trend will be uneven between different regions: in large cities, where the stocks are lower, rises in prices might be seen while in other regions, which still have a large amount of surplus real estate to sell, prices may continue to fall.

Change in direction for inflation. The trend for the general CPI over the last few months has been affected by oil prices. In January, inflation stood at –1.3% year-on-year, reflecting the 11.5% year-on-year drop in the energy component. Similarly, February's rise in oil prices (18% month-on-month) pushed up inflation to –1.1%. This upswing in oil prices has led us to revise upwards our inflation forecast, to –0.1% in 2015 (previously –0.3%). Nonetheless we expect inflation to remain in negative terrain until the middle of the year, when the level effect of the energy component disappears.

2014 ended with a current account surplus equal to 0.1% of GDP, a notably lower figure than in 2013 when the surplus reached 1.4% of GDP. This deterioration can largely be explained by the significant decline in the trade deficit for goods (–2.3% in 2014 compared with –1.2% in 2013), caused mostly by the strong upswing in imports (+6.3%) and the merely moderate growth in exports (+2.4%) in nominal terms. Nonetheless December's balance of payments posted notably better figures than the previous month, confirming a change in trend that is supported by the aforementioned temporary shocks, whose effect is expected to continue throughout the year and will help the current account balance to improve to 0.6% of GDP by the end of 2015. Firstly, the fall in oil prices has reduced the value of energy imports. Secondly, the euro's depreciation is benefitting exports and especially tourism, in January exceeding 65 million tourists. Thirdly, the reduction in financing costs thanks to the ECB's QE will improve the income balance. Support from such temporary factors will diminish in 2016 so we do not expect any additional gains in the current account surplus. In the long term it will be vital to continue making gains in competitiveness to improve the external balance further.

The government approves a decree-law to relaunch its social agenda. The main measure passed is the fresh-start act for private individuals, extending to persons (in addition to companies) the ability to restructure their debt before going bankrupt (out of court agreement), as well as reinforcing the role of mediators in reaching agreements. In bankruptcy proceedings, debt write-downs will be allowed (except public ones) for individuals even though they may not be covered by all the assets. On the other hand, debtors must comply with a five-year payment plan. Measures were also passed to encourage permanent employment contracts. Specifically, 500 euros of salary are exempt from Social Security contributions for two years in the case of new permanent contracts. Aid for self-employed workers was also passed (100% refund of Social Security contributions for one year when the working day is reduced to care for children or another worker is recruited), and tax breaks for single parent families with two children. Although the improvement in the economic cycle provides some margin to increase spending, it is vital to remain alert in order to ensure the deficit target is met (see the Focus «A tail wind will help reduce the public deficit»). 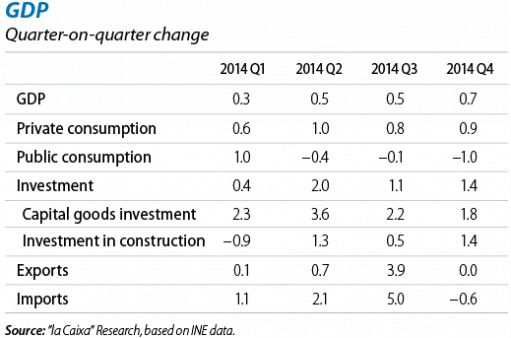 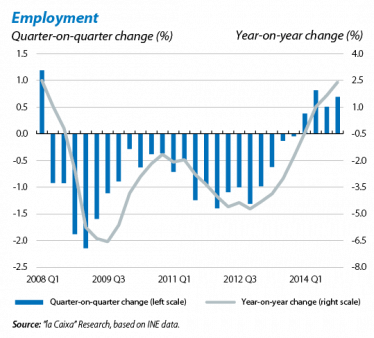