Led by the United States

The United States is leading an uneven recovery with Japan plunged into lethargy and China immersed in its «soft» landing. Among the rest of the emerging economies, India and Turkey have improved their outlook while  oil-exporting countries (such as Russia) continue to suffer the consequences of cheap oil.

The GDP figure for 2014 Q4 was revised downwards from 0.7% to 0.5% quarter-on-quarter (2.4% year-on-year) due
to a worse performance by exports and stocks compared with the initial estimates for the quarter's flash figure. Nonetheless, this does not change the annual figure for 2014 (2.4%) or our main scenario for 2015 (3.5%). In the medium term, the US economy will continue to expand thanks to support from domestic consumption, the push provided by corporate investment, less fiscal adjustment and a recovery in real estate that will gradually consolidate as a result of sustained improvement in the labour market. The appreciation of the dollar, which has the opposite effect, will be largely offset by weak oil prices.

Business indicators confirm the strength of consumption. In January the Conference Board Consumer Confidence index passed the benchmark of 100 points for the first time since November 2000 (the historical average is 93 points) and, in spite of February's decline (to 96.4 points), the indicator looks very likely to continue improving. The weakness in retail and consumer goods in January, calculated at current prices, was largely due to low fuel prices.

The business climate points to a recovery in investment after the hiatus in 2014 Q4. The ISM business sentiment indices (53.5 points for manufacturing and 56.7 for services) remain at levels in line with strong growth in the economy overall, particularly in the case of services which employs 83.6% of workers in the private sector.

The labour market performed well in January but wage growth is still moderate. In January 257,000 jobs were created, above the 200,000 threshold that is indicative of a strong market. The unemployment rate rose but only marginally to 5.7% while the participation rate improved by 0.2 pps to 62.9%. However, the unemployment rate which includes both the unemployed and the under-employed (people forced to work part-time due to the economic situation), rose by 0.1 pps to 11.3%, preventing any larger growth in wages. In this respect, wage rises (2.2% year-on-year in January) are still clearly below the zone that Janet Yellen, Chairman of the Federal Reserve (Fed) believes to be «normality» (between 3% and 4%).

Inflation drops into negative figures for the first time in the US since the crisis of 2008. January's CPI fell by 0.9 percentage points to –0.1% year-on-year, slightly below our forecasts and those of the consensus. Once again the large drop in energy prices, 9.7% between December and January, has supported this sharp adjustment. Nonetheless, the core CPI rose by 0.2% month-on-month, keeping year-on-year growth flat at 1.6%, a figure that will sustain debate regarding when the Fed will start to raise interest rates.

GDP in 2014 Q4 takes Japan out of recession but is disappointing. The Japanese economy grew by 0.6% quarter-on-quarter in 2014 Q4 after two consecutive quarters of decline due to the VAT hike (from 5% to 8%) last 1 April. But quarter-on-quarter growth was clearly lower than expected by the consensus and left growth for the whole of 2014 at 0.0%. The breakdown of GDP in Q4 was also disappointing: (i) private consumption provided the biggest shock, increasing by 0.3% quarter-on-quarter with no sign of improving; (ii) the significant contribution of stocks will not continue; and (iii) investment still looks weak. All this has led us to reduce our growth forecast in 2015 from 1.2% to 0.8%.

Japan is growing in nominal terms but is once again close to deflation. The quantitative expansion by the Bank of
Japan (BOJ), whose assets totalled 63.8% of GDP in January compared with 33.6% at the beginning of 2013, to revitalise prices and achieve nominal growth has had some success, helping to reduce the percentage of public debt to GDP (245% of GDP in 2014 according to IMF estimates). But here the risks are also downwards. The CPI without foods but with energy (used as a benchmark by the BOJ) rose in January to 2.2% year-on-year and to 0.2% discounting the VAT effect (the general CPI rose by 2.4%, 0.3% discounting VAT), very far from the BOJ's 2.0% target.

Wages, the key to reactivating domestic demand, continue at a standstill. Almost all wage rises between 2012 and 2014 were by increasing bonds and extraordinary payments (and not increases in the basic wage), indicating that entrepreneurs still see no improvement in long-term growth.

The main scenario for China is a soft landing, in line with the controlled slowdown desired by the government which will probably lower its official growth target in March from 7.5% to 7.0%. January's indicators introduce a downward
bias to our scenario with the PMI manufacturing index falling slightly below the benchmark of 50 points for the first time since September 2012 and exports and imports decreasing by 3.3% and 19.2% year-on-year in nominal terms, respectively. Although the business indicators from January and February must be interpreted with caution due to the distortions produced by the change in date for the Chinese New Year, the continued slowdown of imports is still a source of concern. However, the government has not hesitated to cut the official interest rate for a second time in less than four months (to 5.35%) to support the economy and January's low inflation, 0.8% year-on-year, provides ample room for further expansionary policies.

India improves its statistics and revises its GDP growth notably upwards. According to the new official  measurement, GDP advanced by 7.5% year-on-year in Q4, lower than the 8.2% figure for Q3 but much higher than the 5% flash figure provided by the old series. The new GDP series introduces comprehensive changes to bring it more in line with international accounting standards: the market price (MP) criterion replaces that of factor cost (FC) and the items of mining and local industries, intellectual property and software have been included. On the supply side, the new series gives more relative weight to manufacturing (traditionally weak in comparison with China) and, in demand, increases the relative weight of fixed capital formation and private consumption.

In the rest of the emerging economies, Turkey has improved its outlook while Brazil and Mexico are worse. In Brazil, the standstill in activity at the end of 2014, difficulties in implementing the fiscal adjustment announced and a more restrictive monetary policy than expected have led us to lower our growth forecast for 2015 from 1.0% to 0.7%. Hikes
in indirect taxes and higher administered prices have also caused us to increase our inflation forecast from 6.0% to 6.5% in 2015. Mexico accelerated to 2.6% year-on-year in 2014 Q4 (2.2% in Q3), bringing the annual figure for 2014 to 2.1% (1.4% in 2013). In spite of this faster growth, the announced adjustment in government spending (0.7% of GDP), which will affect Pemex investments, means that growth should be slightly lower in 2015 (3.1% compared with 3.4% previously). In contrast, indicators in Turkey point to activity speeding up at the end of 2014 and we have therefore revised upwards our main scenario for 2014 (from 2.8% to 2.9%). In 2015, in addition to the good end to 2014, increased monetary accommodation will also play in its favour and we have revised our growth forecast for 2015 from 3.4% to 3.6%.

Russia continues to face the biggest risks among the large emerging countries. The Minsk II agreements could represent the start of a decline in geopolitical risks and, in the medium term, the withdrawal of sanctions. Given the uncertainty still present, it is premature to improve our main scenario (–3.3% in 2015) although the recent upswing in inflation and a larger than expected depreciation of the rouble justify an upward revision for inflation: from 9.4% to 13%. 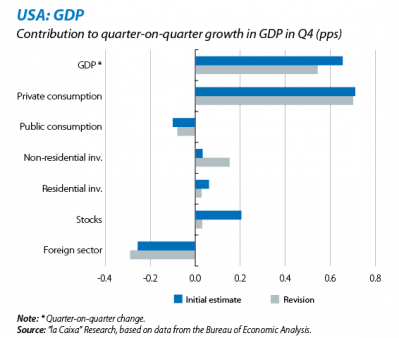 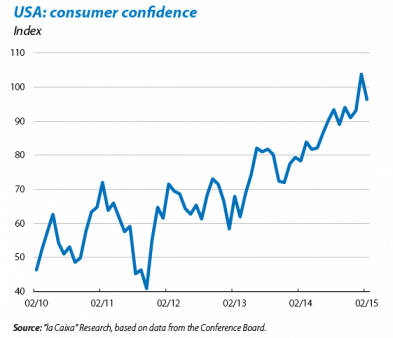 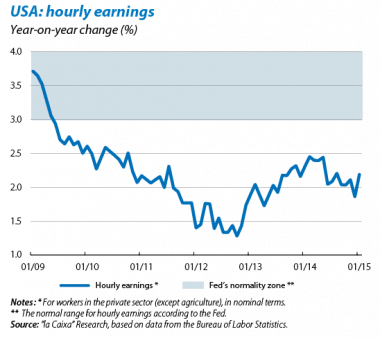 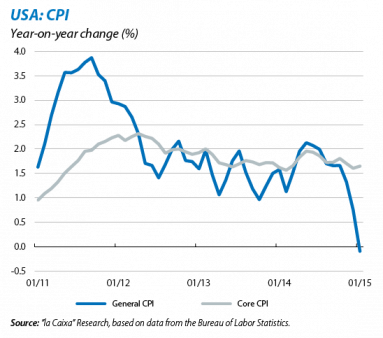 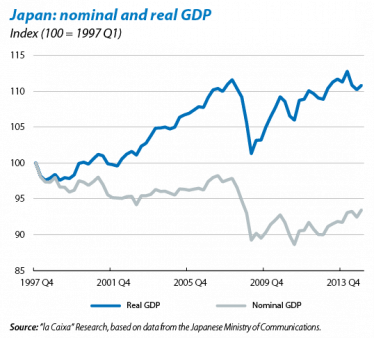 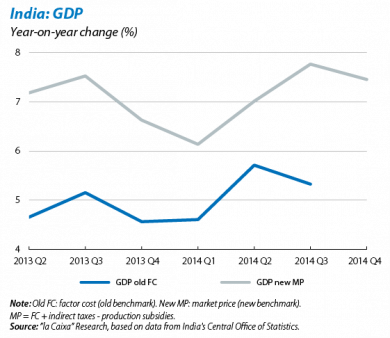 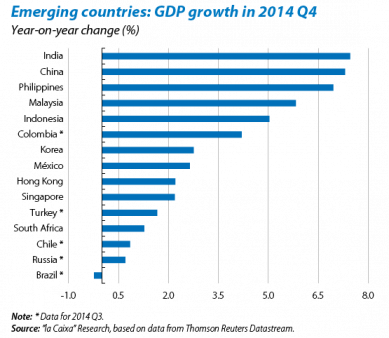