Recovery is consolidating but slowly and unevenly

The third bail-out programme of financial aid is approved for Greece. After months of great uncertainty given the difficult negotiations between Greece and the institutions, an agreement was reached for a third bail-out programme: financial aid is expected to total 86 billion euros (around 48% of Greek GDP). The programme contains demanding structural reforms (privatisations and fiscal, labour and pension reform) and its implementation will be closely supervised. The first measures approved by the Greek parliament did not enjoy the support of a significant number of the members of Syriza, forcing the Prime Minister to call early elections for mid-September. The agreement does not include debt restructuring (the reason why the IMF does not form part of the programme) and has failed to dispel misgivings regarding the sustainability of the country's debt, although the payback periods are likely to be eased in the future. A significant share of the programme's funds (25 billion euros) will be used to recapitalise Greek banks, severely damaged by capital controls. Signs can already be seen of a slowdown in the outflow of household and corporate deposits, which had worsened as negotiations stalled. Although the risk of Greece leaving the euro area has faded, the crisis has highlighted the need to continue strengthening the region's economic governance in order to make sure no member country finds itself in a similar situation.

The IMF warns of the euro area's low growth potential if far-reaching reforms are not carried out. The international institution notes the region's economic improvement but recommends a combination of different economic policies to underpin growth. In the short term, the IMF recommends stimulating domestic demand by maintaining the current monetary policies and promoting expansionary fiscal policies in those countries whose public finances can withstand it. For the banking sector it recommends strengthening banks' balance sheets, reducing the percentage of non-performing loans and improving their supervision, as well as completing banking union. In the medium and long term the institution predicts relatively low growth in the euro area (around 1.5% in 2020). Especially worrying is the limited growth capacity of demand and, above all, productivity, making the euro area more vulnerable to external shocks. To counteract this it is crucial to implement structural reforms that help boost productivity and to reinforce the region's economic governance (for more details see the Focus «What are the crucial steps to complete the economic and monetary union in the euro area?»).

Economic activity is still expanding in Q3. The composite PMI and the economic sentiment index for the euro area reported higher figures in Q3 than in the first half of the year, indicating sustained growth during the quarter. However, all the evidence points to continued divergence between the region's two major economies. In Germany the composite PMI improved in August (and now stands at 54.0 points) while in France it worsened for the second consecutive month, although it is still in the expansionary zone (51.3 points). The overall assessment of the composite PMI for the rest of the countries in the euro area, which in August continued and even accelerated the upward trend observed in the last few months, is clearly positive.

Consumption continues to recover but slowly. The rate of growth in retail and consumer goods was 1.2% year-on-year in June, somewhat less than in previous months, although the average for Q2 as a whole was similar to the figure for Q1. The drop in the consumer confidence index in July and August suggests that private consumption did not increase its contribution to growth although we expect the positive trend to return over the coming months. On the one hand, the gradual recovery in the labour market will boost private consumption (in July the unemployment rate stood at 10.9%, 0.2 pps less than the previous month) while, on the other, the recent drop in oil prices will increase the population's purchasing power, leading to an increase in household consumption.

Inflation remains stable in spite of falling oil prices. The year-on-year change in the harmonised index of consumer prices (HICP) for the euro area stood at 0.2% year-on-year in August, the same figure posted the preceding two months. To a large extent the sharp downturn in oil prices was offset by the increase in fresh food prices. Along the same lines, core inflation remained stable in August at 0.9%. This is the same figure as the one for July but higher than those posted in the first half of the year, reflecting the euro area's gradual recovery. Inflationary pressures in the region will continue to be moderate over the coming months due to the drop in oil prices but core inflation will gradually rise.

Exports increase their contribution to the recovery. Goods exports grew by 11.2% year-on-year in June, boosted by the euro's devaluation. Moreover, the European Commission's indicators for export expectations over the next three months and new export orders point to a favourable outlook for the external sector in the short term. In spite of the slowdown in the main emerging economies, the bulk of the evidence suggests that exports will continue making a decisive contribution to the euro area's growth in the short and medium term.

Germany is still the economic engine of the euro area. Growth in German GDP stood at 0.4% quarter-on-quarter in Q2 (1.6% year-on-year), a similar figure to the average for the previous two quarters. The main stimulus for this growth was exports, contributing 0.8 pps to growth, benefitted by the euro's devaluation and the gradual recovery in the country's main trading partners. However, the increase in domestic demand was weaker than expected with a contribution to growth of just 0.1 pps. Both household consumption and investment were surprisingly weak, the latter with a negative growth rate (in particular construction). Nevertheless the trend for both factors alters somewhat when a wider view of the situation is considered. It is important to remember that household consumption grew strongly in the preceding two quarters. Moreover, the good situation of the labour market and growth in wages, namely 2.2% in June, point to the underlying factors supporting a positive dynamic in consumption being solid. The slowdown in investment is also likely to be a temporary, as suggested by the increase in production capacity utilisation occurring over the last few quarters. The good trend in the IFO index for Germany's economic climate also points to generally favourable prospects for investment in particular and for the economy as a whole in the short and medium term.

Emerging Europe maintains its growth rate. The countries of Central and Eastern Europe recorded notable growth in Q2. Poland, the region's main economy, advanced by 0.9% quarter-on-quarter, a figure similar to the one posted by the Czech Republic and Slovakia. Hungary and Bulgaria also recorded solid growth while Romania, after an exceptionally strong Q1, moderated its growth rate in the next quarter. In year-on-year terms growth for the region's countries is, in most cases, around 3%-4%, equivalent to their growth rate trend in the long run. This positive underlying trend is mainly due to the region successfully capitalising on the consolidation of the euro area's growth and in particular to the dynamism of one of its main markets, Germany. It should also be noted that, at a time when the emerging economies have suffered an increase in financial uncertainty as a whole, the countries of emerging Europe have hardly been affected by this factor, precisely because their close ties with euro area has set them apart from other emerging economies more closely related to the global economic cycle. 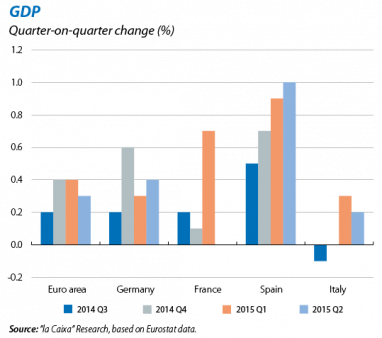 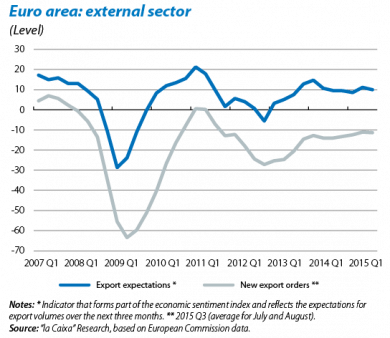