The international markets have put on hold the recovery they started mid-February. The beginning of May was marked by widespread losses on international stock markets and particularly in the emerging markets. This greater risk aversion continued during most of the month but reversed in the last few days. The global stock market index (MSCI) remained stable in May (–0.2%), standing at 0.8% above its level at the end of last year. Investor sentiment was initially affected by weaker US GDP growth figures than forecast for the first quarter and disparate results from the labour market in April. Moreover, activity indicators for the Chinese economy, also weaker than expected, reminded investors of concerns regarding a possible, albeit unlikely, hard landing for the Asian giant. Last but by no means least is the tougher message given out by the Federal Reserve (Fed), which led to significant adjustments both in equity and also bond markets.

Several important dates in June will play a critical role in the trend for financial assets over the coming weeks. June's agenda is packed with key events that could be accompanied by spikes of nervousness in international markets. Firstly, the Fed's next meeting will monopolise investor attention at the beginning of the month until its latest decision regarding the official interest rate is published mid-month. Moreover, the end of the month will be marked by two important elections. On June 23rd is the referendum on whether the United Kingdom should remain in the EU, whose outcome still seems uncertain due to the persistence of a large number of undecided voters who could go either way. Three days later Spain repeats its general election and the polls, for the time being at least, point to a result similar to December's. None of these events should cause disruption in the financial markets although they might provide a significant boost for safer financial assets that act as a safe haven at times of uncertainty.

The Fed returns to the centre of the international financial scene and considers the possibility of raising interest rates in June. Although there was no meeting of the Federal Open Market Committee (FOMC) in May, the US monetary institution was still in the spotlight that month. After the cautious message hinted at by the official communication from its April meeting, the less accommodative tone of the minutes from the same meeting, published mid-May, came as some surprise, with several members of the FOMC believing that an interest rate hike in June was «appropriate». This more restrictive rhetoric was echoed throughout the month in the numerous statements made by various Fed members, including Yellen. Nonetheless, and in spite of the upcoming presidential elections in November, we still expect the Fed to carry out the next hike in September 2016. The gradual recovery by inflation, which picked up slightly in April, and the consolidation of the US economic cycle, which is likely to be confirmed at the end of July with solid GDP figures for 2016 Q2, are the main factors that should encourage the Fed coincide its hike in the fed funds rate with the end of the summer.

The Fed's more hawkish message makes the markets adjust their expectations. Since the start of monetary policy normalisation in the US in December last year, uncertainty has been high regarding the rate at which monetary policy would become tougher and market expectations have varied according to the data being published and the Fed's messages. The month of May was no exception. The more restrictive tone suggested by the minutes of April's meeting led to a significant adjustment in market expectations which started to predict the next interest rate hike in the US for the summer when, just a few weeks before, it had been predicted for the end of 2016 and even the beginning of 2017. International stock markets reacted to the possibility of a June hike with losses, especially those of the emerging block. The yield on 10-year US Treasury bonds picked up once the minutes had been published, rising by around 10 bps to 1.85%, a level comparable with the one observed at the beginning of the month. Lastly, the dollar accelerated its appreciation against the euro.

In the European bond market Greece is once again in the spotlight, but with good news. In May the yield on the German bund remained at very low levels, remaining most of the month below 0.17%. In the periphery Spain's risk premium started a downward slide during the second part of the month after moving above 150 bps early in May. In any case, the similarity of these fluctuations with those of Italy's risk premium seems to indicate they are not due to changes in the country's idiosyncratic risk but are particularly dependent on political uncertainty. Nevertheless the most noticeable news in Europe's sovereign bond market that month was undoubtedly the encouraging performance by Greek sovereign debt whose risk premium fell sharply: the approval of the first review of Greece's bail-out programme by the Eurogroup at the end of May pushed the country's risk premium to below 700 bps, its lowest level in six months. However, the slight upswing posted in the following days is a reminder of the difficulties of the Greek case (in particular the large amount of fiscal consolidation that still needs to be carried out).

Emerging stock markets suffer considerable losses while the European stock market manages to end the month in positive figures thanks to a sharp upswing at the last moment. In May, emerging equity markets recorded losses of close to 4% on average. This relapse was due to two types of factors: firstly global factors, especially the Fed's tougher message; and secondly domestic factors, still dominated by geopolitical risks. Brazil, with heightened political uncertainty due to developments in the impeachment of its President, is still the most worrying case. In the advanced block, after a weak start to the month, Europe's stock market saw gains of 1.2%, supported by positive advances in the Greek situation. This optimistic tone was widespread in large sectors although bank equity benefitted the most. In the US, the S&P 500 posted gains of a similar size with growth of 1.5%.

In the foreign exchange market the prevalent trend since the start of the year reversed thanks to the dollar's slight appreciation. After going above 1.15 dollars at the beginning of the month, the euro depreciated against the US currency which clearly benefitted from the support provided by the Fed's less accommodative message. With regard to the emerging block, most of the currencies could not rely on such a strong recovery in commodity prices as in previous months. The Fed's influence once again dominated the trend in emerging currencies, which depreciated by more than 4% on average.

The widespread recovery in commodity prices comes to a halt. Oil continued to pick up but at a slower rate than in the last few months, after rising by more than 20% in April. However, this weaker growth, which only reached 3.2% in the monthly figure, did not stop a barrel of Brent from reaching the 50 dollar barrier in the last few sessions of the month. With regard to other commodities, while agricultural goods increased in price it is worth noting the bad performance by precious and industrial metals. In particular, the price of copper, a leading indicator of industrial activity, fell by more than 8% in spite of a slight upswing at the end of the month. 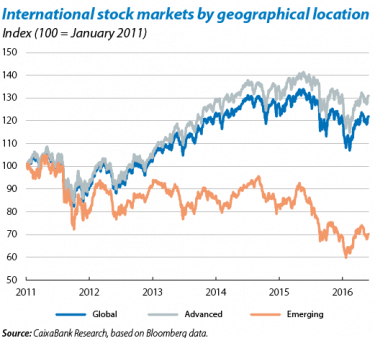 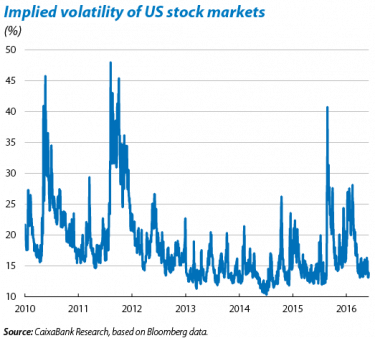 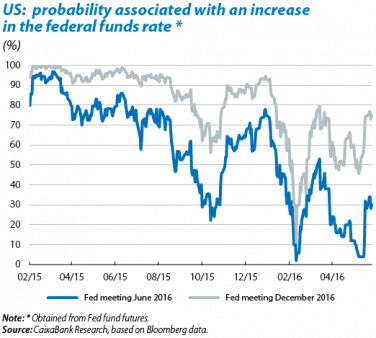 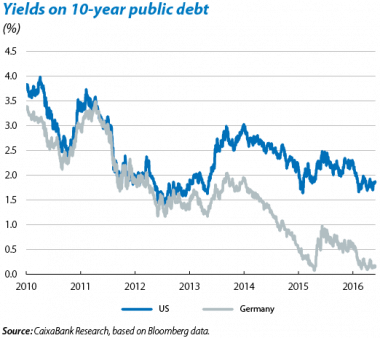 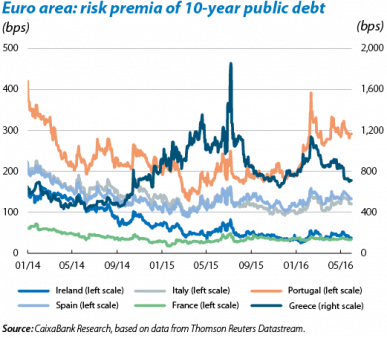 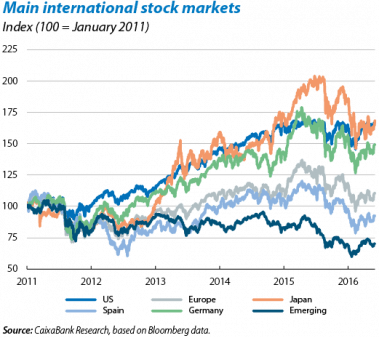 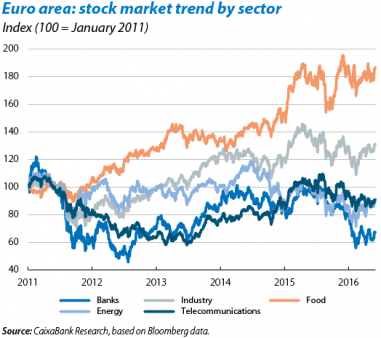 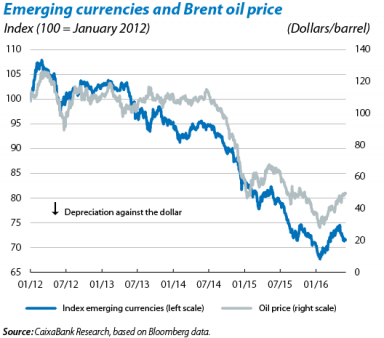 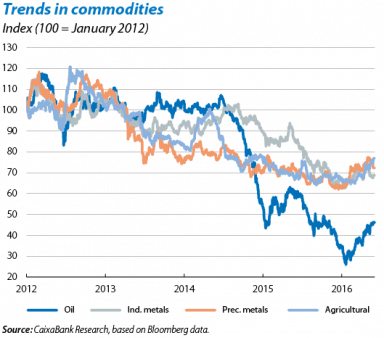