With the shock of the COVID-19 outbreak, tourism businesses reduced their activity, destroying a large number of jobs and taking massive advantage of Spain's furlough scheme (ERTE). Tourism supply is now attempting to revive itself. The lifting of mobility restrictions has encouraged a good number of tourist establishments to reopen their doors, even though demand is still low. With the start of the summer season, it is essential for the tourism sector to maintain, and benefit from, its commitment to reactivation as this is the only way to create jobs again. 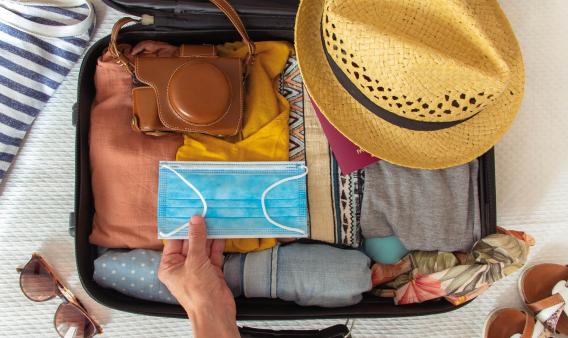 The slump in tourism demand between March and June was accompanied by the deactivation of a large number of tourism companies, which were forced to cease trading due to mobility restrictions and the impossibility of offering their services. According to data from the hotel occupancy survey, between March and May 2020 a monthly average of 4,100 hotel establishments remained open, 73% fewer than in the same period in 2019, a considerable reduction but somewhat less than the decline suffered by demand (over 90%). This is due to the fact that the sector has managed to reactivate slightly better than might be inferred from the demand figures. In May, 12% of the establishments that had been operating in February reopened their doors (mainly small establishments with low staffing needs), slightly ahead of demand due to an expected upturn in bookings.

The complexity of the current situation is such that the surveys carried out by the INE, which are traditionally used to analyse the tourism supply in this report, provide us with much less information than in the past since the number of surveys carried out on open establishments is insufficient.1  Thanks to CaixaBank's use of big data, we have been able to overcome this problem by developing an indicator that enables us to monitor the levels of inactivity for tourism supply in real time. To do so, we use the share of retail businesses with a CaixaBank payment terminal that have stopped processing any payments. As can be seen in the chart, according to this indicator the sector almost totally closed down in the period between the declaration of the state of emergency and 24 May, the date that marked the beginning of phase 2 in some parts of Spain. Since then, the revival in supply has been gaining ground. At the end of June, and for the first time since March, the share of inactive tourism businesses was below 50%, coinciding with the end of the state of emergency and the opening up of borders with other EU countries. 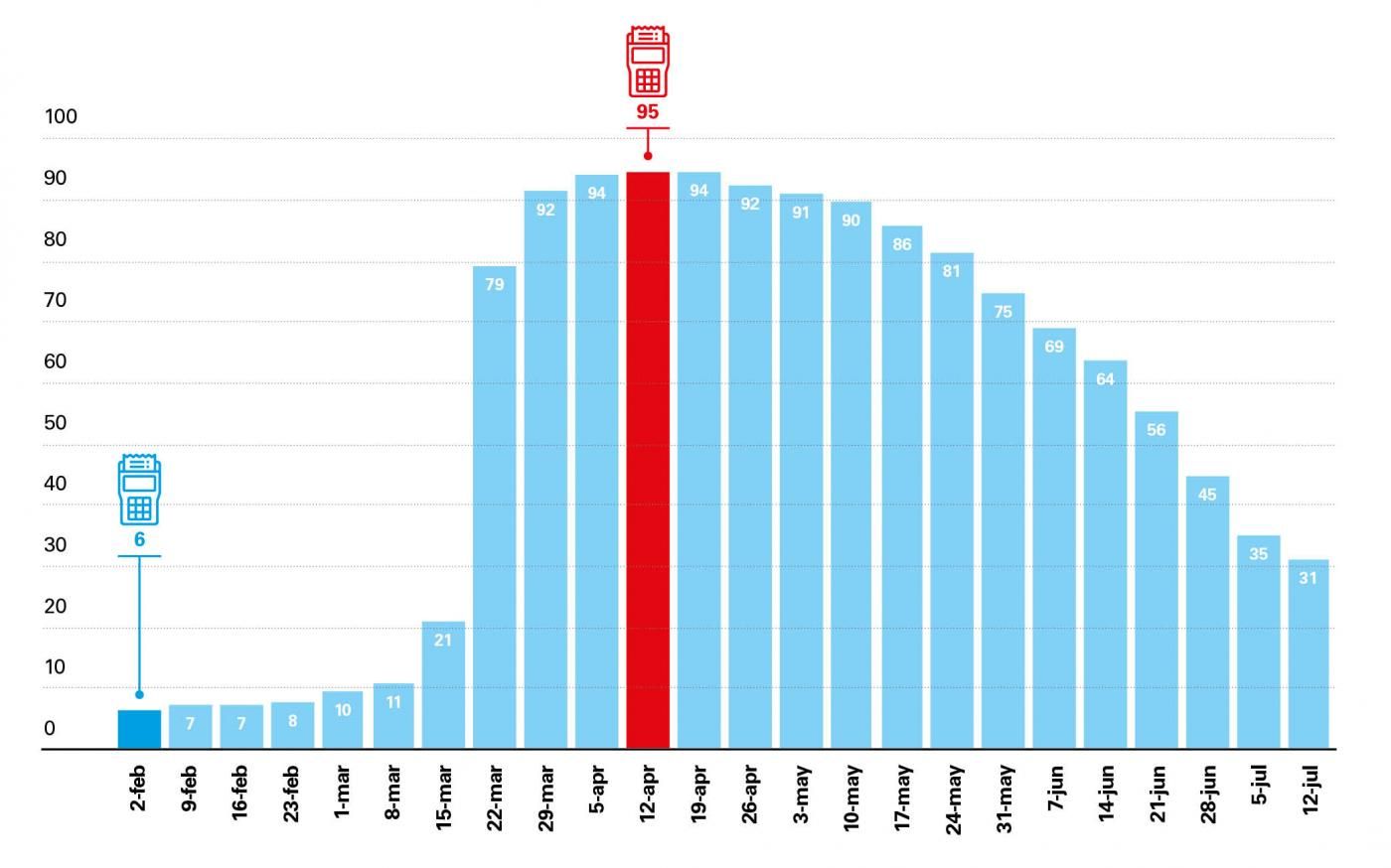 Note: The series has been normalised so that the share of inactive businesses equals 0% in December 2019. Source: CaixaBank Research, based on internal data.

Tourism supply is reviving in advance of demand, reacting positively to the prospects of a recovery and the relaxation of social distancing measures. From the limitation of capacity to 30% and the closure of shared areas in hotel establishments required in phase 1 of lifting the lockdown, in many cases the capacity limit has been raised to over 70% at present, enabling establishments to exceed the demand threshold and offset their costs.2 Even so, according to internal CaixaBank data, during the second week of July 31% of tourism establishments remained inactive and hotel payments were still down by about 65% year-on-year, suggesting that most operators have probably not reached breakeven point.

Reactivating the tourism industry: economic policies and adapting to the new demand

Until this breakeven point is reached, it is important that economic policy measures continue to support the sector. The main support measures have been based on enabling temporary adjustments in the workforce by making the furlough scheme (ERTE) more flexible and also on providing liquidity to companies (100 billion euros with ICO guarantees for companies, with a tranche of 2.5 billion euros specifically for tourism companies), as well as a moratorium of up to 12 months on mortgage operations for properties linked to tourism business and taken out with credit institutions. All these measures, aimed at mitigating the impact of the coronavirus crisis, have been fundamental for tourism businesses to survive during the months
of little or no demand.

The sector will have to boost its transformation in order to adapt to the new parameters regarding health safety in the short term and to new demand requirements in the medium and long term.3 Indeed, the plan to reactivate tourism proposed by the government in mid-June contains measures along these lines, such as soft loans to finance sustainable solutions for tourism companies and investment in digital transformation. Expanding the role of public policy could therefore be a key lever to ensure tourism has the capacity to carry out these investments and maintain its levels of competitiveness.

On the other hand, the reduction in foreign competition for tourism within a lower demand environment such as the present may also be vital to speeding up the sector's reactivation this summer. It should be noted that British and German tourists' perception of other Mediterranean markets, such as Turkey, Egypt, Tunisia and Morocco, improved in 2019, limiting the growth of Spain's international demand.4 However, the pandemic has meant that these markets are now notably limited in terms of European visitors,  not only because they are not members of the EU but also because the restrictions imposed by their governments are more severe than in the case of Spain and other Mediterranean EU member states. This can be seen in the following chart, based on the Oxford COVID-19 Government Response Tracker.

Source: CaixaBank Research, based on the Oxford COVID-19 Government Response Tracker.
Employment in the tourism industry, the hardest hit by COVID-19

The industry's reactivation is even more in the news, if possible, because of the impact it could have on employment. Spain's labour market has suffered a terrible shock. In June, the number of people registered as employed with Social Security stood at 18.6 million, 974,000 fewer than in June 2019 (–5% year-on-year), of which around 70% were temporary workers. In addition, 1.8 million employees were affected by furlough measures; i.e. they were still registered with the Social Security system and therefore did not count as unemployed but were either not working or at least not full-time.

Employment in the tourism sector has been the hardest hit by the current situation. At the end of May, tourism-related employment stood at 2.5 million people, nearly 387,000 fewer than in the same month in 2019 (–13.5% year-on-year). This implies that 44% of the jobs lost in Spain were in the tourism sector. In addition, around 31% of tourism employees were furloughed while 5.5% took advantage of severance packages, well above the average for Spain in May, namely 9.8% furloughed and 2.0% being made redundant.

Starting from such a low level of employment, and given the traditional weight of tourism jobs in the economy as a whole (12.8% of the registered workforce in 2019), the «reopening»  of the sector could have a substantial effect on employment and on moderating the number of jobs affected by the furlough scheme. Despite the fact that tourism jobs are highly seasonal throughout the year, a considerable amount of employment is generated by tourism at times of moderate demand. In other words, the bulk of the jobs are created when hotel establishments decide to open, even if the actual occupancy of the hotel is low. Logically, as the occupancy rate increases, so does the number of employees, but much more gradually. Specifically, according to our estimates, the basic staff of a hotel (those who do not depend on the occupancy rate) represent about 65% of the staff the hotel would employ if it were full. For example, an average Spanish hotel, which according to INE data consists of 49 rooms, would employ 17 workers with a 100% occupancy rate, while with a minimum occupancy rate of 35% it would employ 13. Although there is a substantial difference in employment between the high and low seasons, it should be noted that the hiring of most hotel staff is not so dependent on the seasonality of demand.

In this respect, although Spain's average occupancy rate will remain limited for the rest of the year, a small improvement in the prospects of tourist arrivals could make all the difference in reactivating the sector and the labour market as a whole. 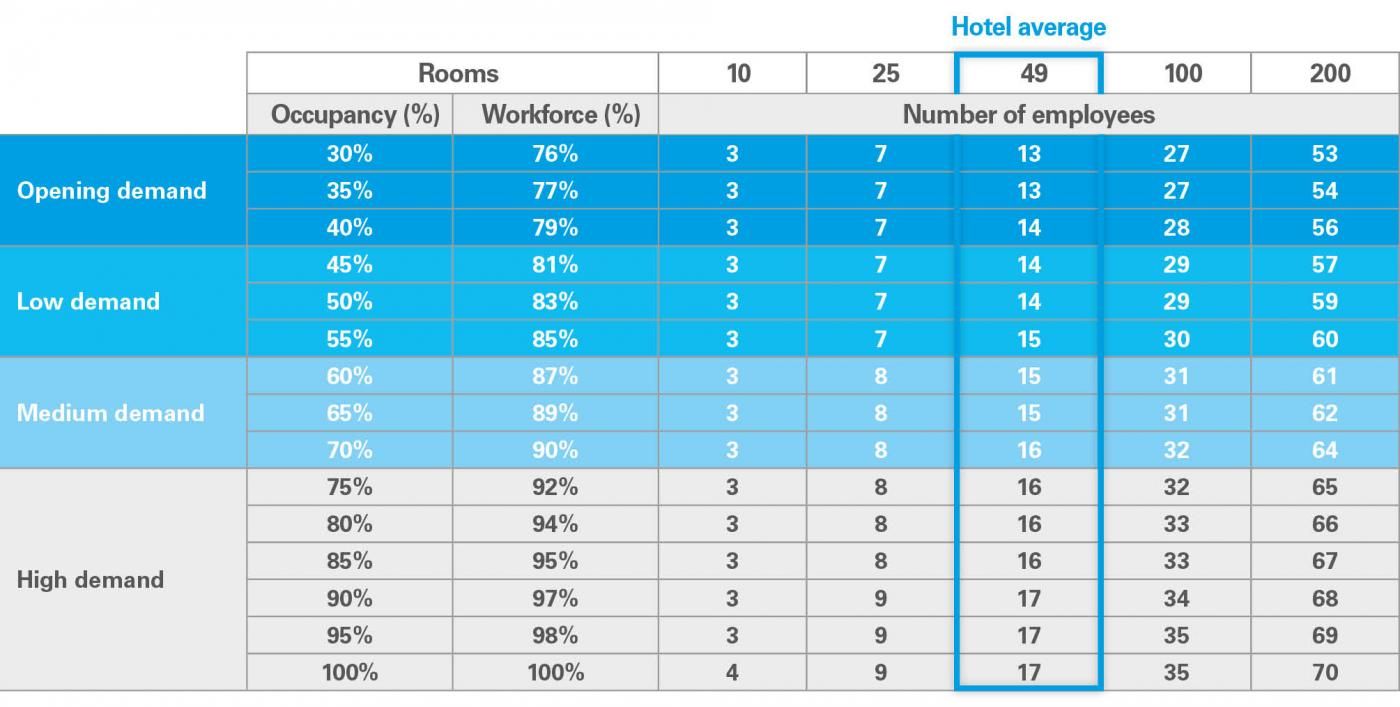 Note: The sensitivity of the number of employees per hotel room to the different occupancy rates has been estimated using data from the survey «Encuesta de Ocupación Hotelera» for 106 municipalities between January 2005 and December 2019. Source: CaixaBa