Intuition tells us that a shock like COVID-19 should increase country risk and this has certainly been confirmed by the data. Nevertheless, a longer-lasting impact on country risk should be observed, which is not the case. 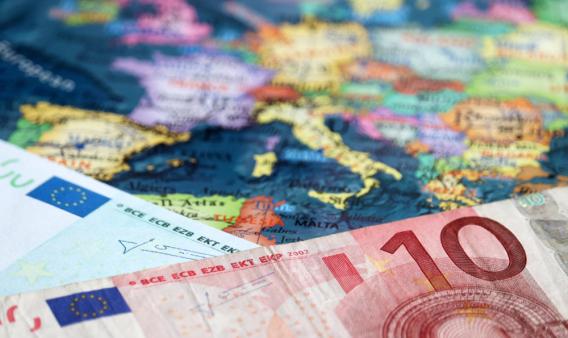 Intuition tells us that a shock like that of the COVID-19 pandemic should increase country risk, and the data confirm this. As shown in the first chart, the premium of the CDS on the 5-year sovereign bond1 increased significantly at the height of the first wave of coronavirus across a large number of countries with a good or very good credit rating.2 Country risk has subsequently reduced, as a result of the lower incidence of the pandemic and the measures taken to support the economy.

However, in this phase marked by a decline in country risk there is a dissonance: the investment-grade countries of the euro area have experienced a somewhat more significant decline in country risk, despite being one of the regions most affected by the pandemic. In other words, with all the implications of the COVID-19 crisis in terms of falling GDP and the resulting rise in public debt, we should see a more persistent impact on country risk, yet this is not the case.

Looking at dates can help us identify which factors are most likely leading investors to take a more positive view of country risk in the euro area. Specifically, the increase in the gap between the euro area and other regions occurred in June, just after the European Commission proposed an ambitious European recovery plan, Next Generation EU (NGEU), on 27 May. Furthermore, this plan was in addition to the new public debt purchase programmes launched in March by the ECB, which ensured that the funding needs arising from the pandemic could be met. Indirectly, this also helped to defuse doubts over the sustainability of public debt in Europe.3

Therefore, NGEU and the ECB appear to be important factors in dampening the translation of the shock of the pandemic to country risk. To try to discern the importance of these elements, we estimate the rating which would be consistent with the macroeconomic situation of the major euro area countries based on the historical evidence4 and compare it with the rating that is inferred from the premiums on sovereign CDSs and with the rating published by Fitch (see second chart). 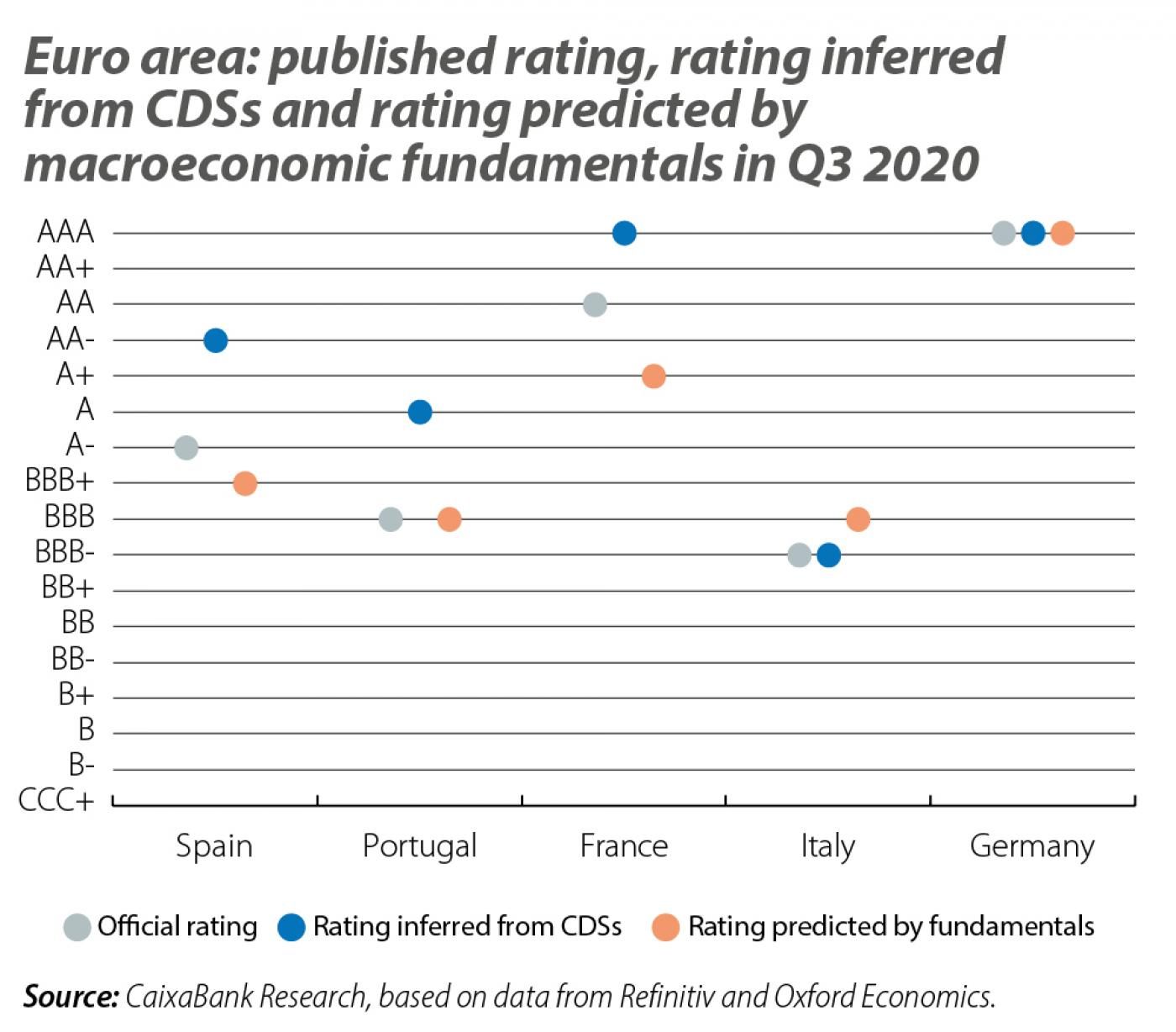 We draw two major conclusions from this comparison. The first is that the financial markets currently tend to establish a better credit rating than that suggested by the macroeconomic fundamentals. This diagnosis reinforces the key role of NGEU and the ECB as «dampeners» of country risk. If investors were only dealing with information derived from the macroeconomic situation, they would perceive a higher risk. The geographical breakdown is also significant, as the mismatch between the discounted rating in the markets and that which is consistent with the macroeconomic fundamentals is more noticeable in the countries hardest hit by the pandemic, such as Spain or France, while it is non-existent in Germany, which has registered by far the lowest incidence of the pandemic among the countries analysed and also has a more robust macroeconomic situation. Thus, the investor narrative would be that in the states hardest hit by the COVID-19 pandemic, NGEU and the ECB have had a greater mitigating effect: as much as four credit rating levels in the cases of Spain and France, and three in the case of Portugal. This is profound, as it implies that the combined impact of the two elements is equivalent to the gap in the published rating between Spain and France, for instance.

The second conclusion concerns the official rating. In general, in the countries hardest hit by the pandemic, the published rating lies at an intermediate level, between that which is inferred from CDSs and that indicated by the macroeconomic fundamentals. What implications does this have for the expected evolution of the published rating, which ultimately counts the most when it comes to investment decisions? There are two possible aspects to take into account: the inertia of the rating agencies and how country risk is assessed in exceptional times. The first is relatively less alarming: perhaps the rating agencies’ valuations converging with those derived from CDSs is only a matter of time (indeed, the agencies revise their ratings at specific times, whereas CDSs are traded continuously). In fact, this is precisely what happens in normal times: CDSs generally anticipate changes which the agencies then tend to validate.

But that is precisely the question: these are not normal times. In the presence of an unprecedented shock like that of the COVID-19 pandemic, which has led to historical action being taken, the macroeconomic models surely do not adequately capture all the factors that come into play in determining countries’ credit ratings. This requires greater expert judgement, which is precisely the corrective factor that the rating agencies provide. Thus, the models should be read as generators of more adverse scenarios (see last chart), because they do not taken into account all the elements that are considered by investors (CDSs, although these cannot always be isolated from global market sentiment) and by the agencies.