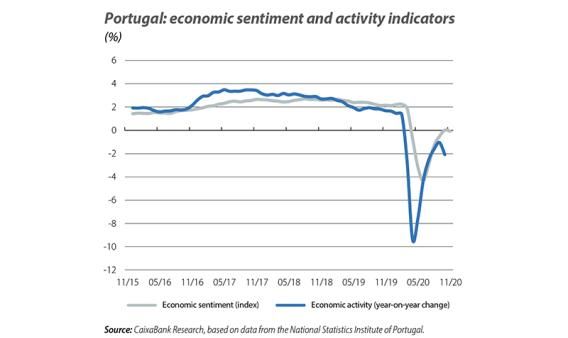 The Portuguese recovery was temporarily interrupted in Q4

Most indicators suggest that Portugal’s economic activity contracted in the last quarter of the year, albeit much more moderately than in the spring. On the one hand, mobility was again reduced by the restrictions imposed to curb the second wave of infections, and for Q4 as a whole it stood at levels similar to those at the start of the summer. On the other hand, the available economic sentiment and activity indicators had also moderated during October and November. Specifically, card spending fell by 9.3% year-on-year in November, while growth in industrial production and turnover in services went from +0.4% and –0.4% year-on-year in October to contractions of –3.6% and –5.1% year-on-year in November, respectively. However, these declines are much more contained than those of the spring, and while they indicate a further contraction of GDP, they also suggest that it will be much more moderate on this occasion than in Q2 (we project a quarter-on-quarter decline of around –2.5%). While the environment will remain very demanding in the early stages of 2021 (all the indicators suggest that, after the festive season, the restrictions will continue to hold back economic activity), over the coming quarters progress in the vaccination process, improved confidence and the support from domestic, European and ECB policies will favour a more sustained recovery. On this basis, for 2021 as a whole we project GDP growth of around 5%. 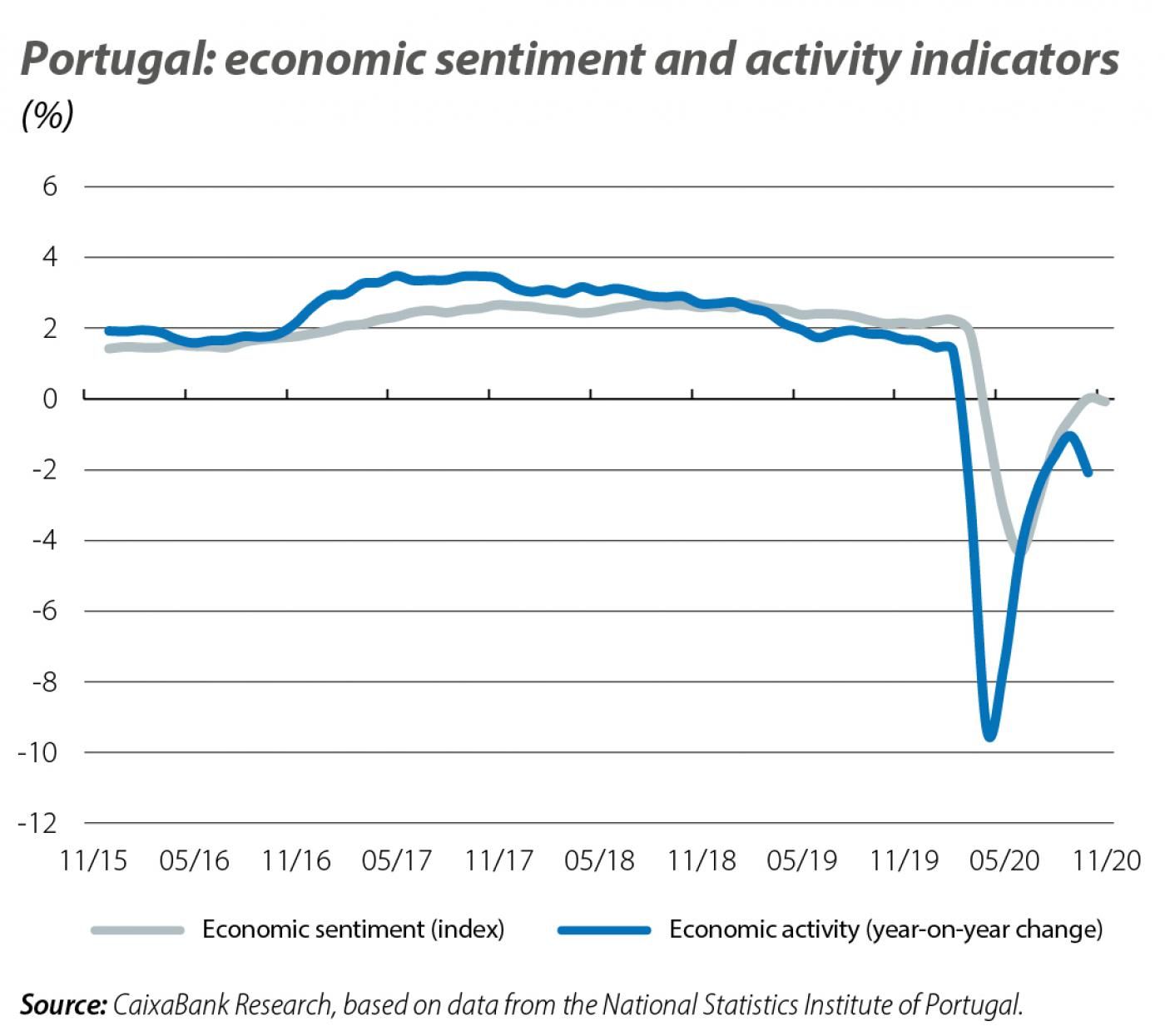 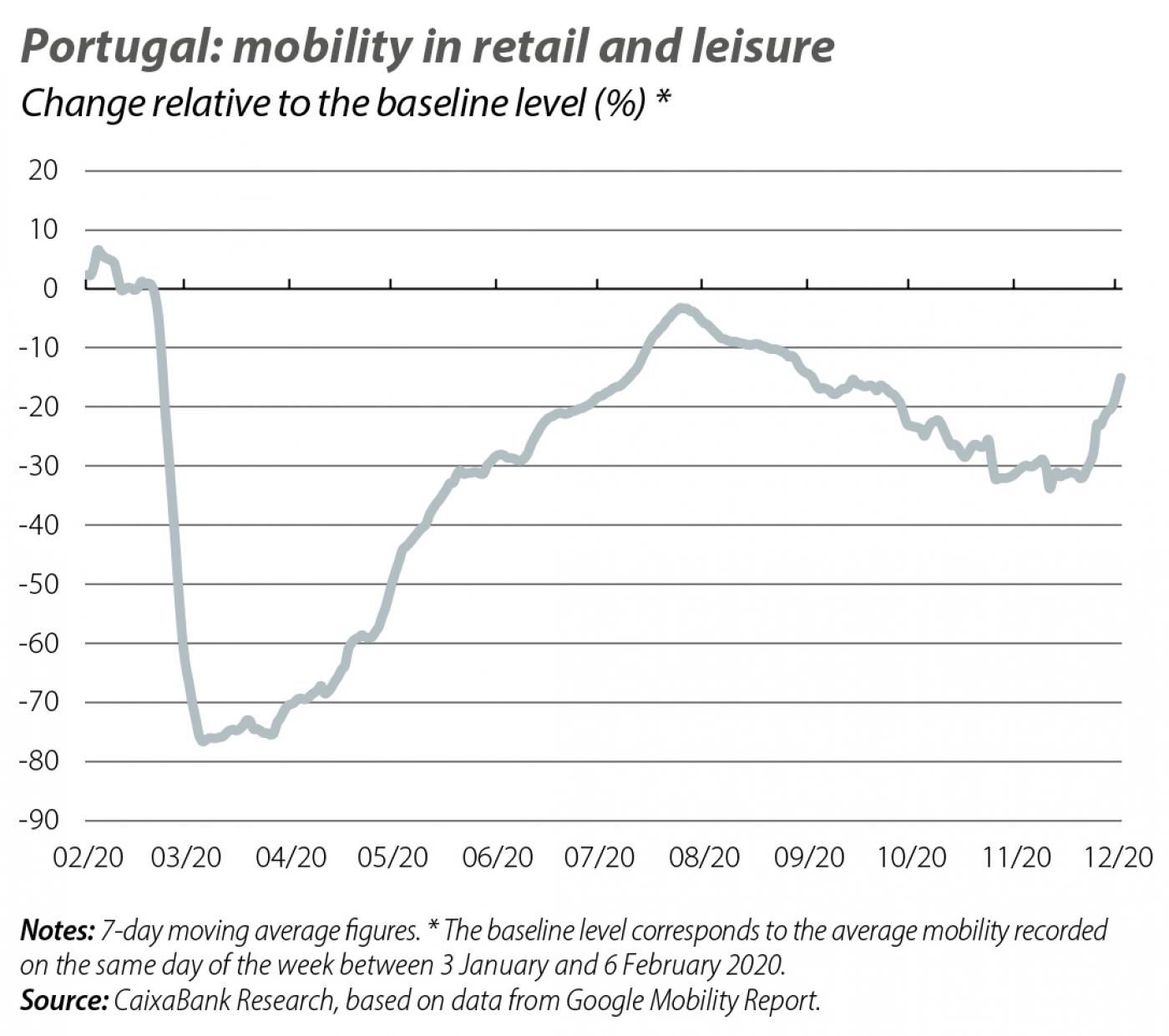 The labour market proves more resistant to the pandemic

In 2020, unemployment remained much more contained than during the sovereign debt crisis (when it peaked at 17% in early 2013). This time, after increasing to 8.1% in August, during the course of the autumn the unemployment rate gradually fell back down (7.5% in October, the latest available figure). Also, whilst in November the number of people registered as unemployed in job centres exceeded 398,000, 26.2% more than in February, this is still a far cry from the figure of more than 700,000 registered in the previous crisis. This greater resilience reflects the decisive implementation of temporary furlough schemes. In this regard, the data for November show a 17.4% month-on-month reduction in the number of workers under «traditional» schemes of this kind, although they remain above the level recorded in February (+5,334 people). Despite the resistance of the labour market data, the high degree of uncertainty surrounding the economic environment has led the government to prolong some of the measures currently in force for the first half of 2021, such as the programmes aimed at facilitating a gradual revival of employment in firms. 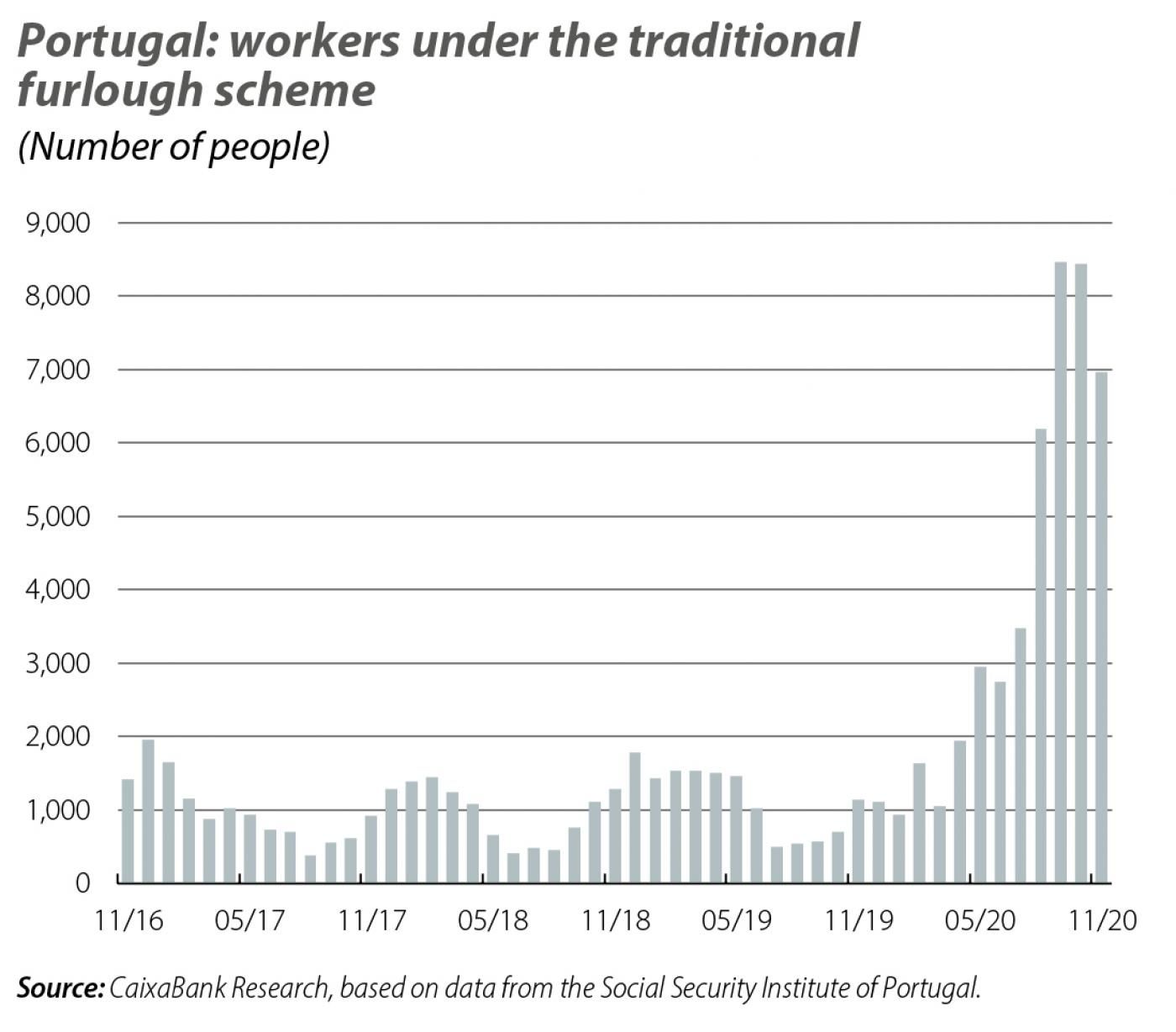 In Q3 2020, the housing price index increased by 7.1% year-on-year (7.8% in Q2 and 10.3% in Q1) and by 0.5% quarter-on-quarter. In addition, sales rose to 45,136 homes (+35.1% compared to Q2 but –1.5% year-on-year), a figure similar to pre-pandemic levels. This resistance can be partly explained by the real estate market’s inertia, although the sector has also enjoyed the support of low interest rates (with a direct impact on demand for housing credit) and the stabilising effect of the government’s economic support policies aimed at minimising the adverse effects of the pandemic (for instance, through furlough schemes and credit moratoriums). However, the impact of the pandemic is expected to end up facilitating a decline in prices during the course of 2021. Furthermore, the restriction of «golden visas» from June 2021 will also weigh on housing demand from foreigners in Portugal’s major metropolitan areas. 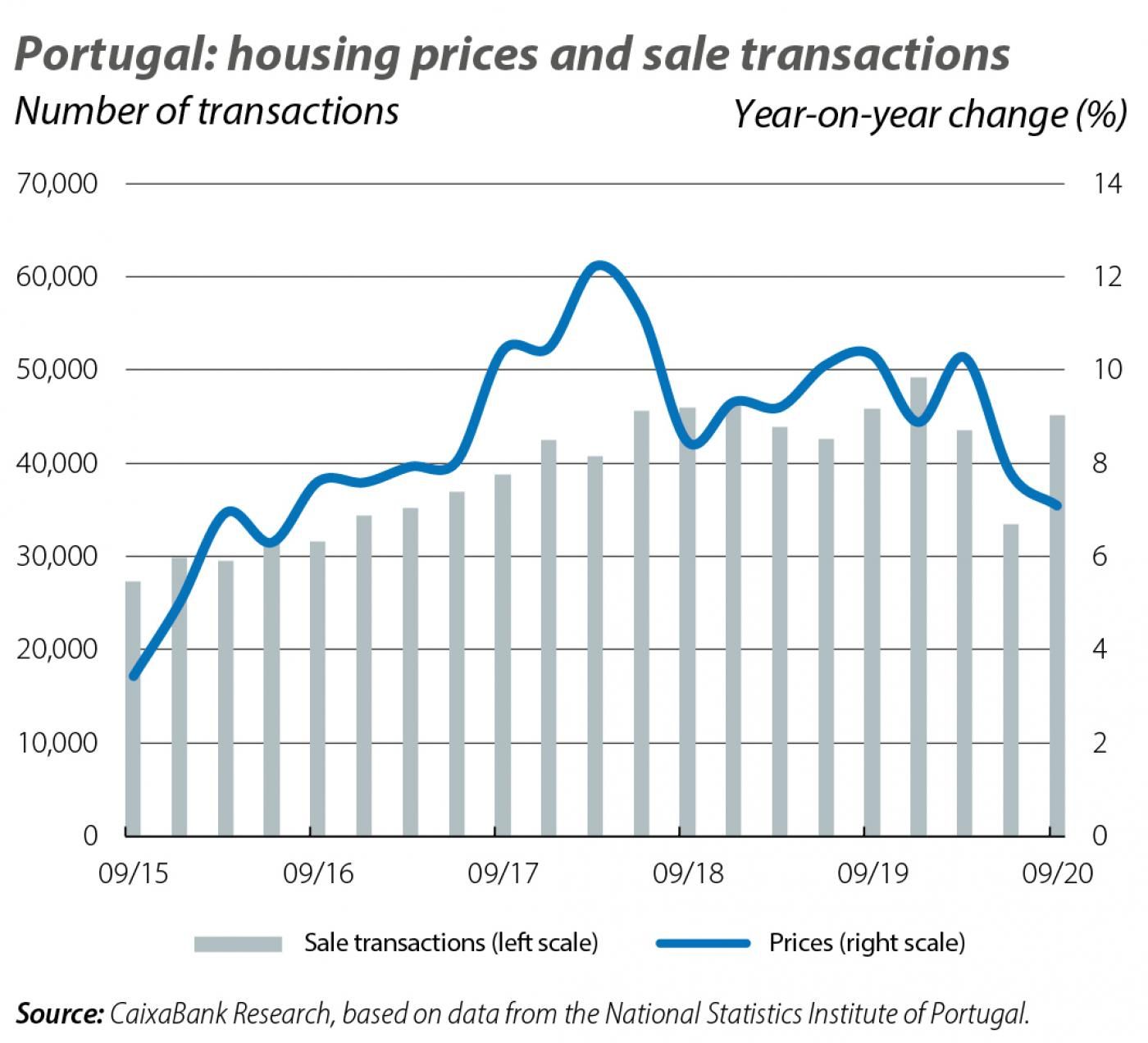 The COVID-19 crisis maintains pressure on the public accounts

The budget balance reached –4.9% of GDP in the first three quarters of 2020 as a whole. This decline relative to the slight surplus at the end of 2019 reflects a considerable fall in revenues (–6.7% year-on-year) and an increase in expenditure (+6.1%), demonstrating the impact of the measures introduced to support households and firm (such as the increase in social benefits and subsidies, which as a whole increased by almost 8% year-on-year, or the state support for TAP, amounting to 1.2 billion euros). The fight against the pandemic has also been reflected in the rise in the public debt ratio, which reached 134% of GDP in October. In 2021, the recovery in economic activity will favour a reduction in this ratio. However, in an environment in which the pandemic will continue to weigh on the economy’s performance, the public accounts will remain restricted over the coming quarters. 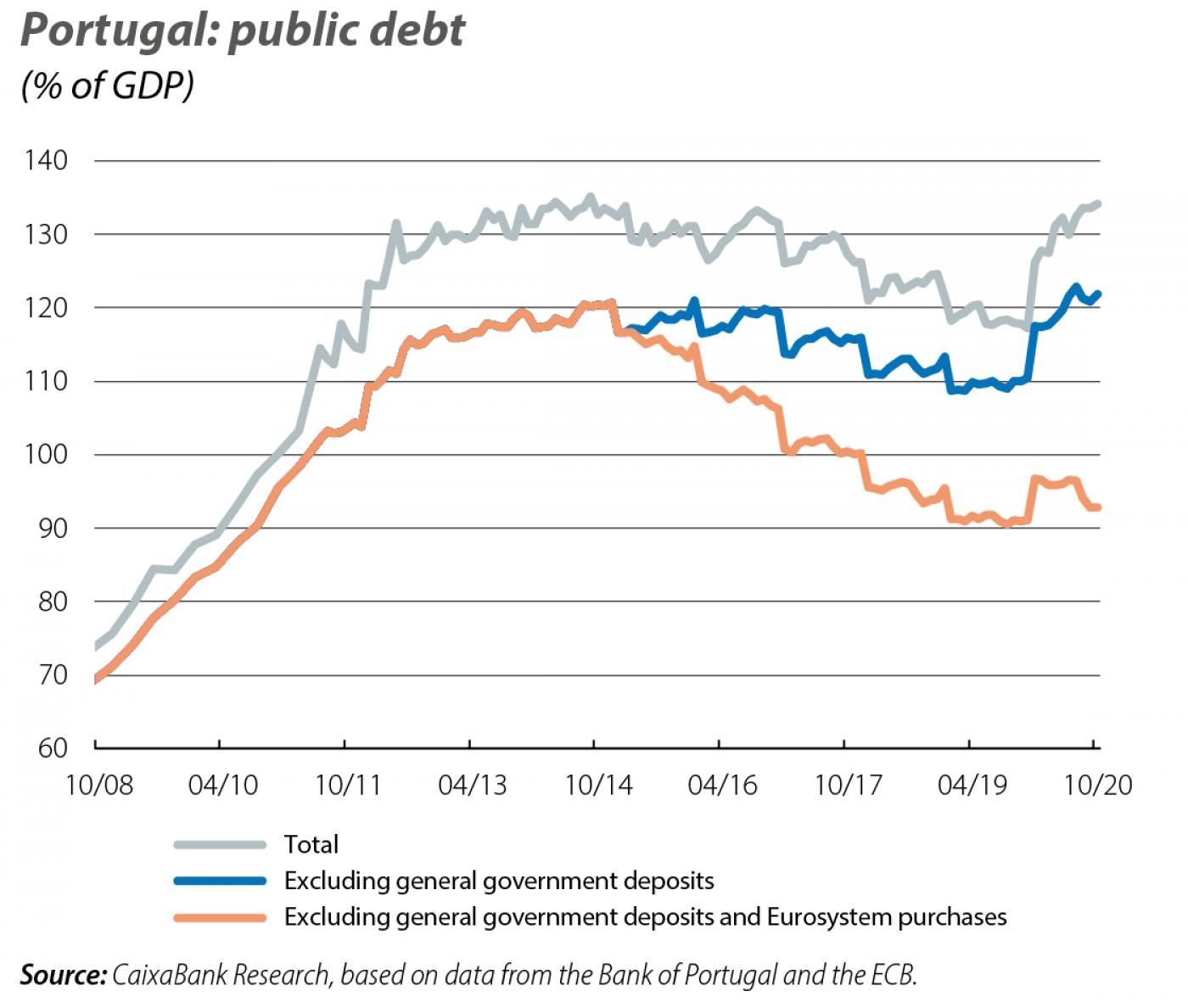 This decrease reflects the increased funding needs of the public sector as a result of the pandemic, since all other sectors have registered an increase in their savings. As an example, households’ funding capacity increased to 4.3% of GDP, while their savings rate rose to 10.8% of disposable income, 3 decimal points higher than in Q2. Firms have also registered a rise in their savings rate, up 4 decimal points to 9.1% of GDP, while their level of indebtedness reached 128.6% of GDP in September (+1.3 pps compared to June and +3.7 pps compared to a year earlier). 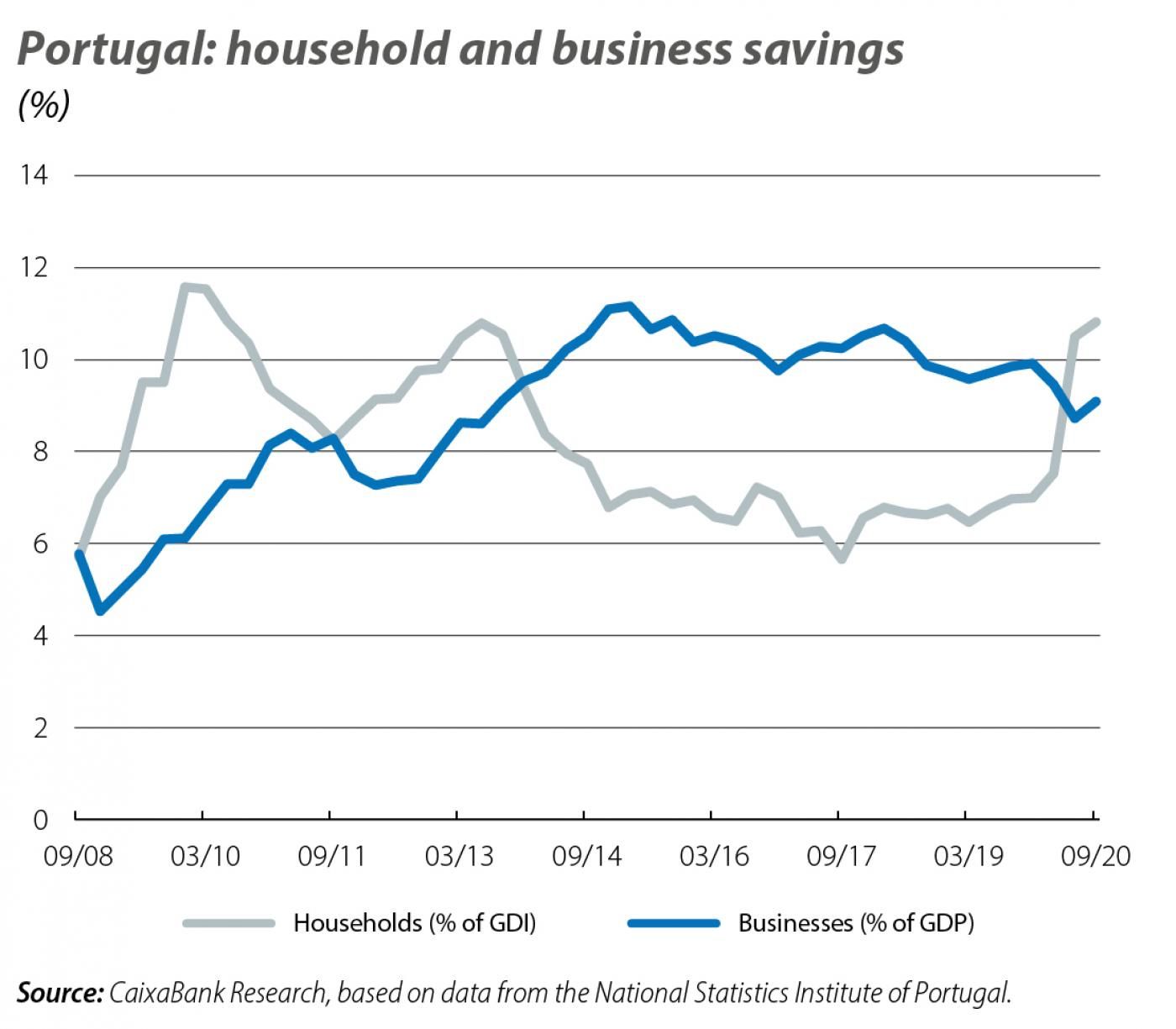