Since the lowest point recorded last March, the main index for the US equity has risen almost non-stop by around 70%. In recent weeks, this rally has also been accompanied by dynamics in certain US equity segments that are reminiscent of events followed by major stock market adjustments in the past. Is the US equity market decoupling from economic fundamentals? 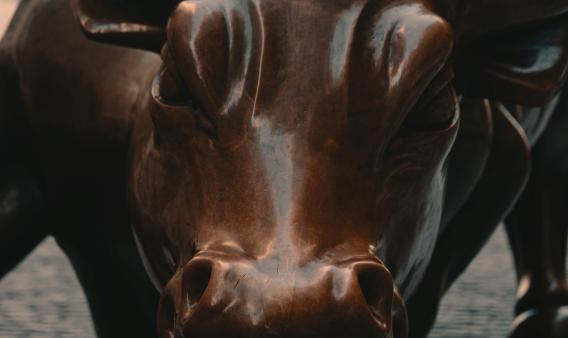 Retail investment activity has reached its highest peak since the crash of 2008, with the addition of the use of financial derivatives, instruments designed in principle for professional uses. The more than exponential growth of certain technology or emerging technology stocks have drawn parallels with the rise and fall of the Nasdaq in the year 2000 (the so-called dot-com bubble). Furthermore, all this is occurring in a context of significant growth in assets that carry risk (other stock markets, particularly emerging ones), high risk (commodities) or extremely high risk (cryptocurrencies).

Beyond the financial and media noise, the combination of a certain «vertigo», with the US stock market at very high levels, and these atypical behaviours raises reasonable doubts over whether the US stock market could be disconnecting from the economic fundamentals.

To address this issue, we first need to recall that the current bullish phase is occurring in the context of a long cycle which began in April 2009. The key to this long take-off is the coexistence of two major supporting factors, low interest rates and the strong performance of the US economy and, by extension, of corporate earnings. Both of these factors are also behind the stock market rally which has been taking place since April 2020. Thus, thanks to an unprecedented fiscal stimulus and monetary expansion policy implemented by the Fed, expectations of economic recovery have been greatly reinforced in the markets. The improved expectations for economic growth have also been reflected in the expectations for growth in corporate earnings. In other words, expected economic growth and corporate earnings are in line with the historical evidence. 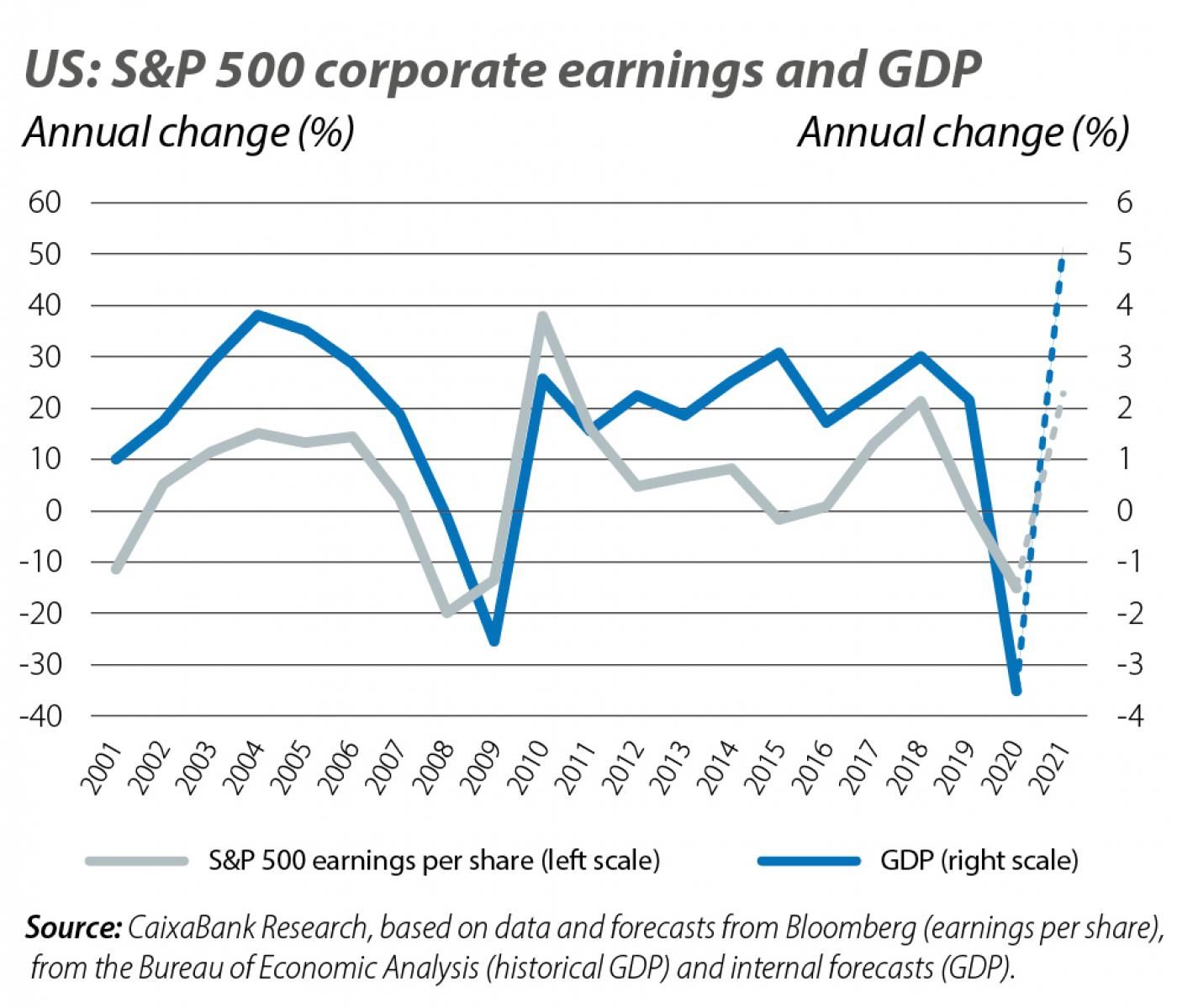 Nevertheless, this alignment of economic growth and earnings growth may not be enough to dispel all the doubts. The first concern, and perhaps the most critical one, is that, despite the expected good profits, stock prices may have been higher than would be reasonable, causing metrics that have traditionally captured moments of overvaluation to become stressed. If we focus on what is perhaps the key measure, the price/earnings (CAPE) ratio over the past 10 years, the data suggest that it is indeed rather high. While not as extreme as in the year 2000, it is currently double
the historical average.

However, there is one important element missing in this intertemporal comparison, namely the risk-free interest rate: on equal terms, a lower interest rate justifies higher valuations.1 Indeed, when we compare the CAPE ratio and interest rates over a long time span, the strength of this relationship is evident. What does this tell us about current valuations and interest rates? While they have
not deviated significantly from the historical relationship, they are far away enough to suggest caution.2 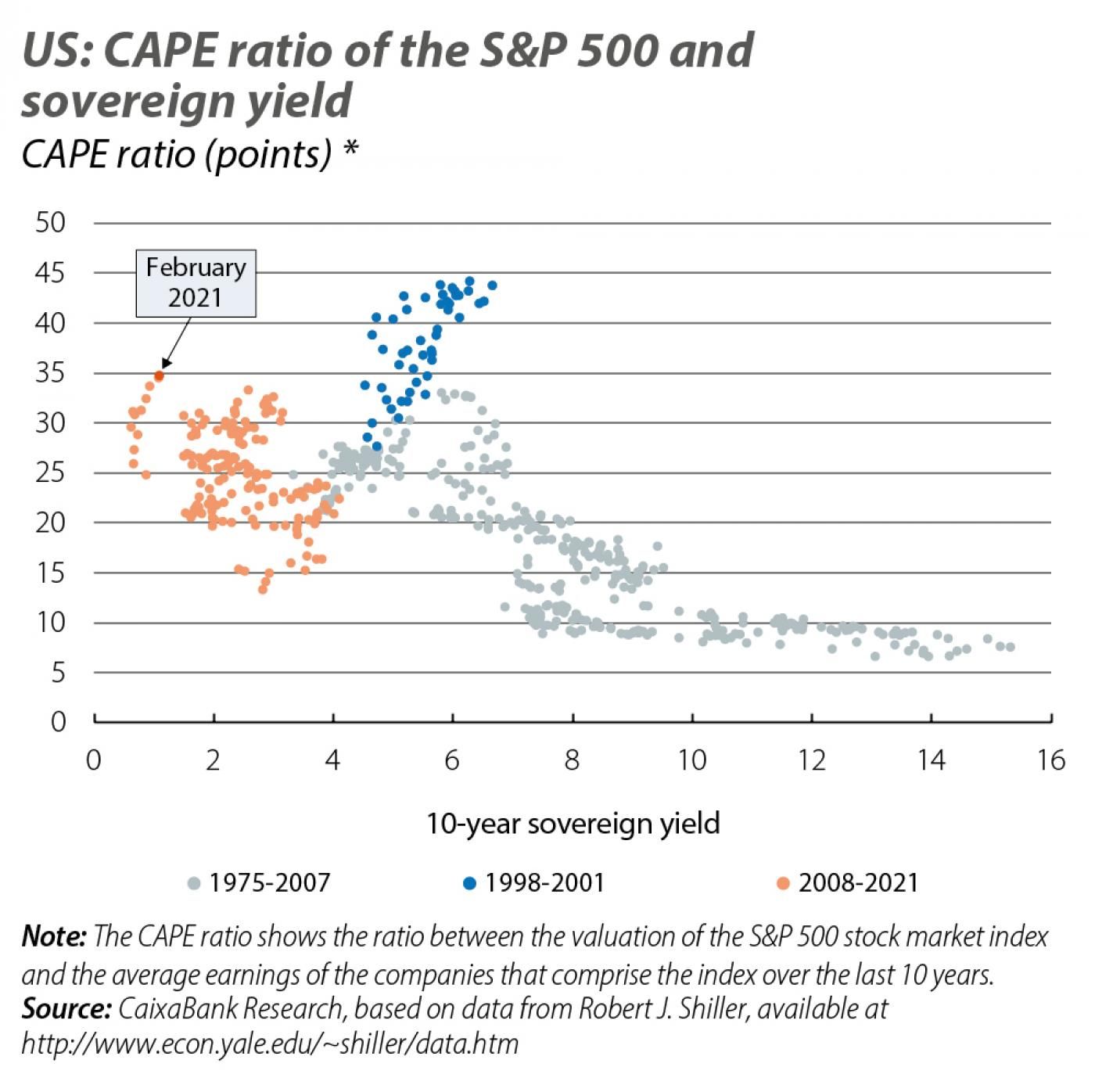 A second source of concern stems from the signs of exuberance in certain segments, such as those with which we opened this article. Here we must distinguish between situations of a different nature. The least worrying among them are no doubt those which have attracted the most headlines. The entry of retail investors should not, in itself, pose a major market risk. The use of investment apps, the use of complex financial instruments without having sufficient knowledge, or even the coordination of retail positions in certain securities are, of course, important issues for regulation and consumer protection. In terms of market risk, however, they tend to be contained phenomena. In any case, the underlying trend of the growing role of retail investors has been developing gradually since 2009 and does not appear to have soared in 2020.

What is more significant is the differential performance of tech companies. Here we must take care to distinguish between companies with a consolidated trajectory which are benefiting from the acceleration of global trends such as digitalisation, e-commerce and teleworking, from others dedicated to emerging technologies. Broadly speaking, the fundamentals of the big tech firms are good and they particularly benefit from low interest rates, as much of their current valuation reflects the expectation of future earnings. The same cannot be said for businesses that are not yet able to generate profits, especially in technology sectors that are still very much emerging and often low-cap. In this area, the risk is higher. 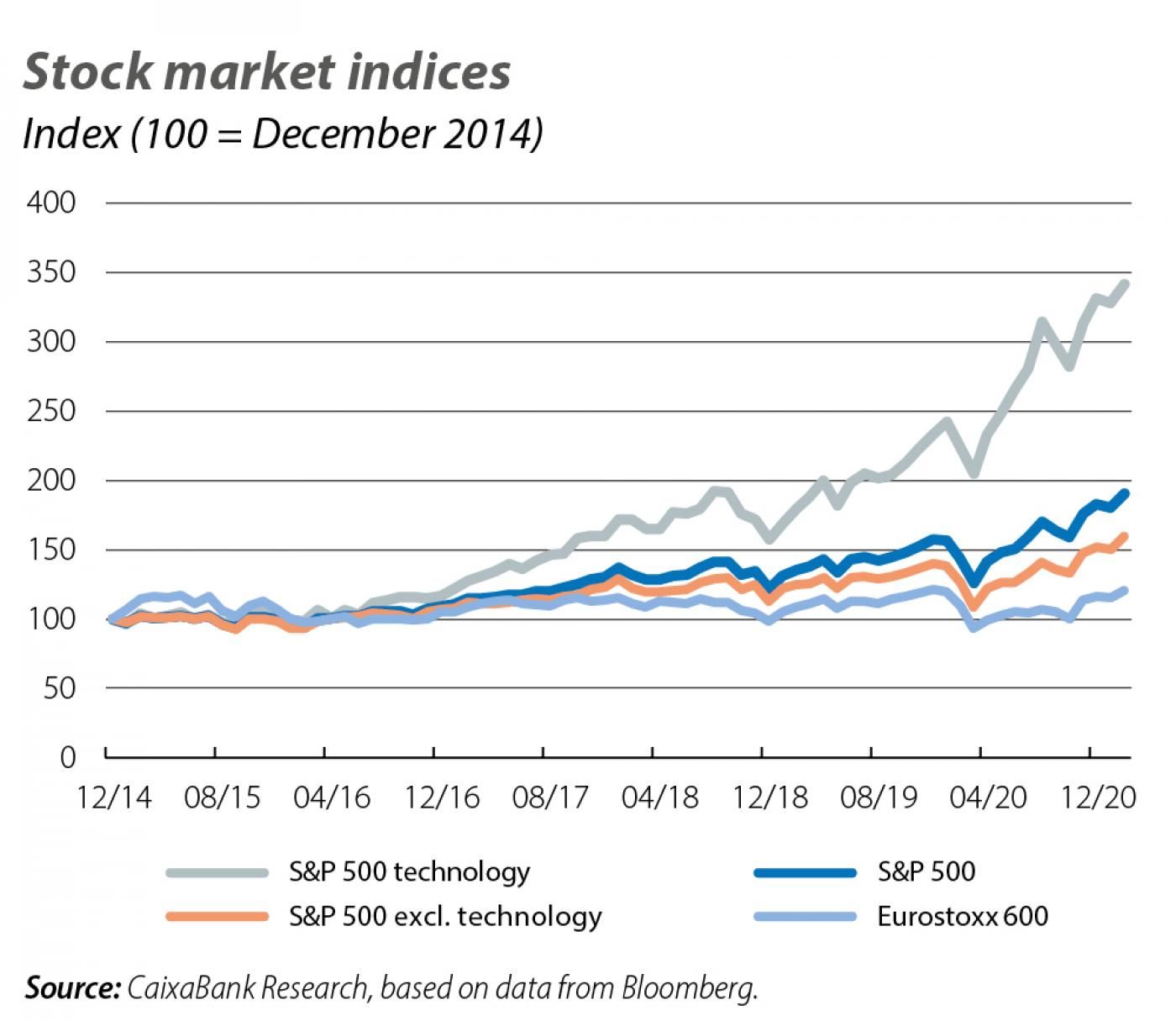 Therefore, if the current rally seems largely to take the recovery of the US economy as a given, can we definitively dismiss the stock market as a source of risk? Unfortunately not, as there are two important aspects to consider: the risk that the macro scenario anticipated by the markets may not come to fruition and the risks of contagion.

With regard to the first risk, we previously stated that the stock markets are pricing in a sustained economic recovery and, moreover, one without excessive inflationary pressures. However, there is a possibility that inflation expectations, which have remained contained to date, could begin to experience upward pressure, which in turn would drive interest rates up as well.3 What happened with the long-term US interest rate is a reminder that this risk is present in investors’ minds: between the beginning of this year and mid-February, the nominal yield of 10-year sovereign debt had increased by around 40 bps, of which 25 bps reflected higher inflation expectations.

The second risk, as mentioned, is that of financial contagion. It is true that some of the arguments set out above, and in particular that relating to the relative overvaluation of the US stock market, are less prevalent in other sectors of the North American stock market or in the European and emerging markets. Nevertheless, if we limit ourselves to the international contagion channel, in the event of a major correction in the US stock market, investors may not discriminate sufficiently between assets, at least in the short term. As can be seen in the chart, European stock markets are conditioned by developments in the fundamentals of the US economy.4 If these fundamentals were to take a turn for the worse, it would be logical to expect some contagion in Europe. Following this hypothetical correction, idiosyncratic factors will undoubtedly operate, and investors could be expected to discriminate between countries and sectors. But while it is raining, there may not be an umbrella for everyone. 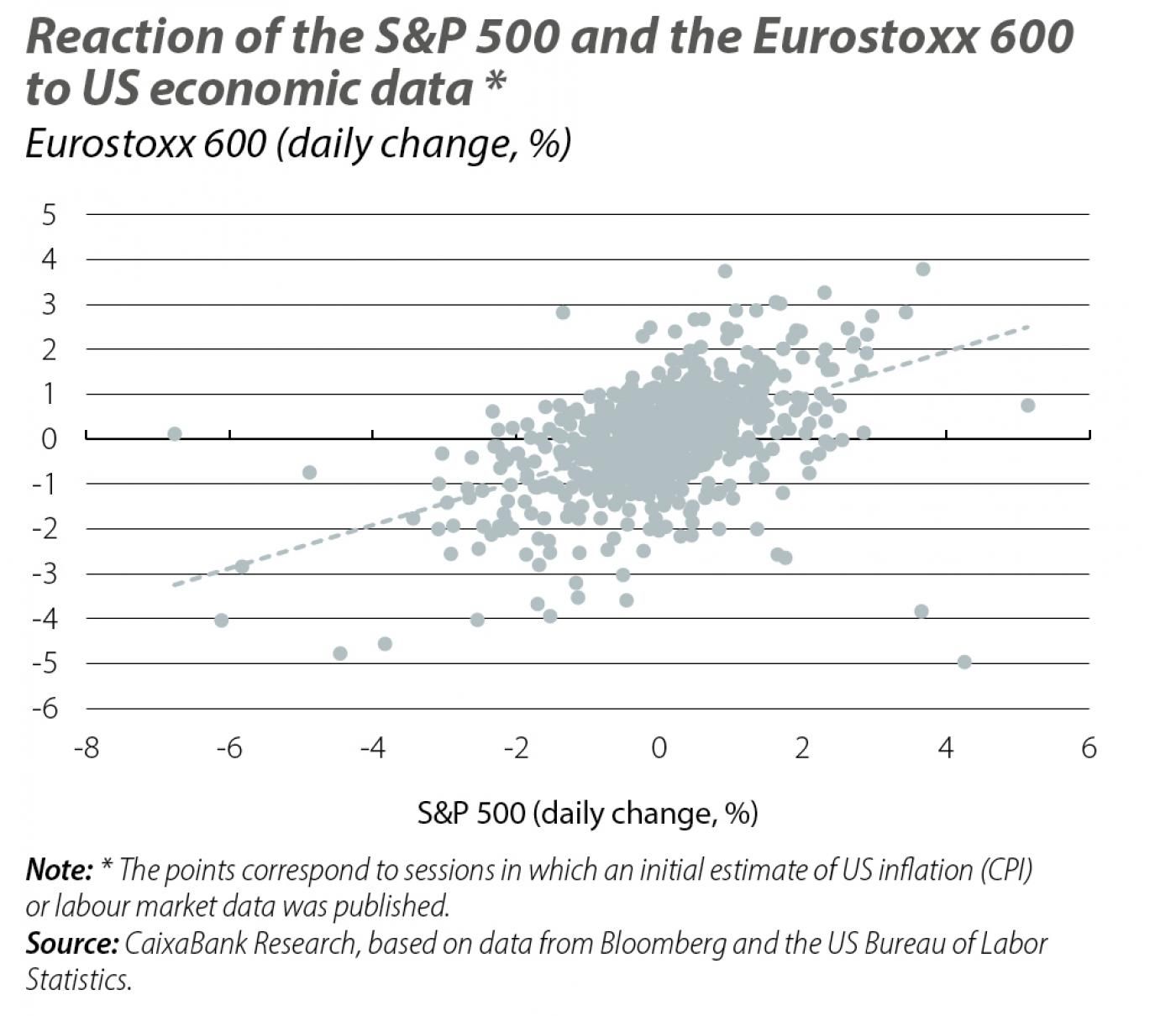