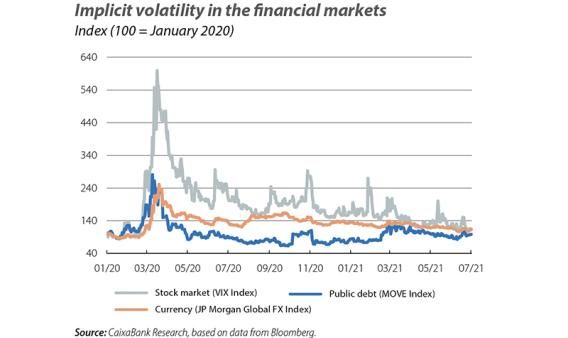 In June, investors remained engaged in an ongoing process of assessing the transitory nature of the inflationary pressures, the respective decisions of the Fed and the ECB, and the pace of the economy’s recovery. All this took place in a context of a constant threat of the spread of new variants of COVID-19. Nevertheless, investor sentiment remained relatively optimistic thanks to the strength of the business cycle in the US, the acceleration in the euro area driven by services, and the increase in vaccinations worldwide. In this regard, financial markets showed a significant degree of complacency which fuelled risk appetite. Equities and some commodities, such as oil, registered yet another month of gains, with the permission of risk-free debt, mainly that of the US, which moderated its volatility while waiting for investors to determine whether they consider the inflationary stress to be temporary or permanent. 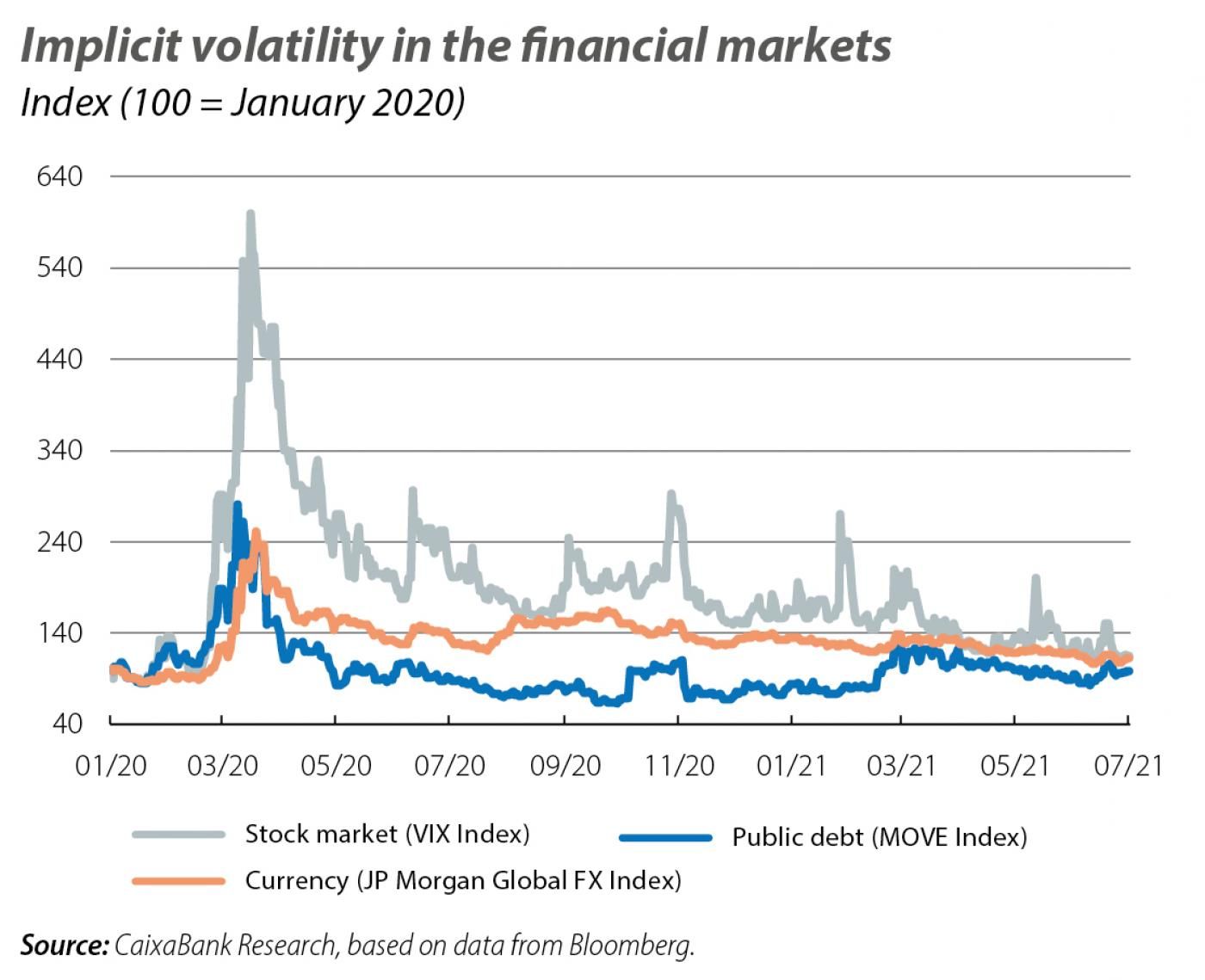 As expected, at the last FOMC meeting, the monetary institution kept interest rates unchanged (currently in the 0.00%-0.25% range) as well as the rate of monthly asset purchases (treasuries and MBSs). The Fed also acknowledged that the economic recovery has accelerated in recent months, and accordingly the Committee revised its growth forecasts for 2021 up to 7% year-on-year in Q4 (previously 6.5%), maintaining those for 2022 unchanged (3.3%). It also raised the expected inflation rate for this year (+1 pp to 3.4%), although it highlighted the transitory nature of the price increases. However, in his subsequent appearance, Jerome Powell conveyed two messages which investors interpreted as a slight shift in the Fed’s monetary policy. The first was that most FOMC members voted to bring the first rate hike forward to 2023 (see chart for changes compared to the March meeting). The second was that the Committee opened the debate on a potential reduction of the asset purchase programme (tapering), in the face of the risk of a persistent increase in inflationary pressures. Over the following days there were differing statements from various members of the Fed, including from Powell himself in Congress. These finally tempered investors’ spirits by underscoring the need for a further recovery in the labour market before withdrawing the monetary stimulus (see the Focus «US: (in)complete recovery of the labour market» in this same Monthly Report). 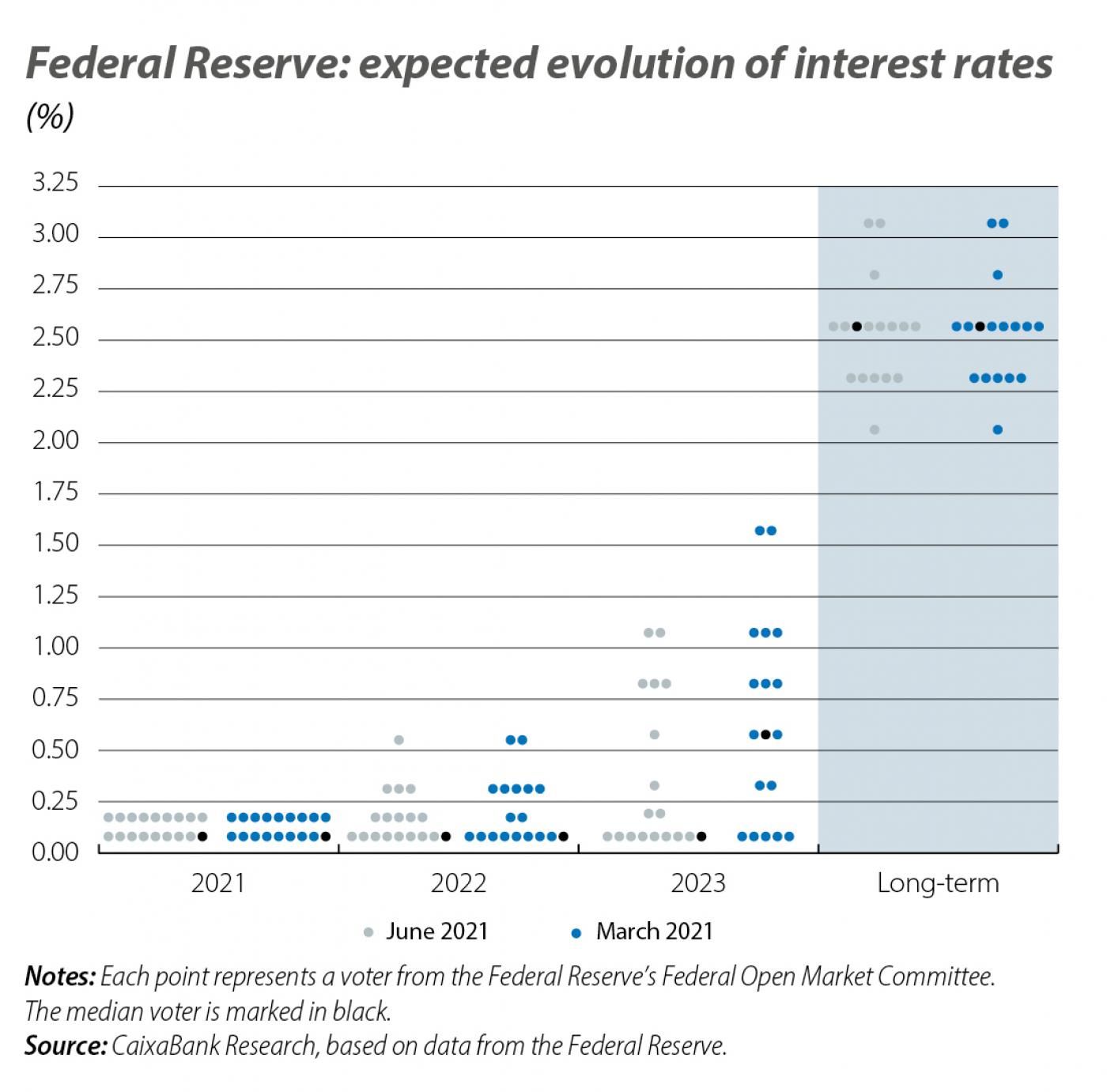 At its June meeting, the ECB was also more optimistic about the euro area’s macroeconomic outlook and revised its growth forecasts for 2021 and 2022 up to 4.6% and 4.7% (previously 4.0% and 4.1%, respectively). It also revised its inflation forecasts upwards (1.9% and 1.5%, previously 1.5% and 1.2%), although it considers the current rise in prices temporary. In addition, the bank chose to preserve the accommodative financial conditions in order to avoid a tightening in the event of any future sovereign interest rate hikes, thus keeping interest rates and the monetary stimuli unchanged. To this end, Christine Lagarde expressed the need to keep purchases under the PEPP in Q3 at a «significantly higher» rate than that observed at the beginning of the year (we expect it to remain at around 80 billion euros a month, as in April and May). 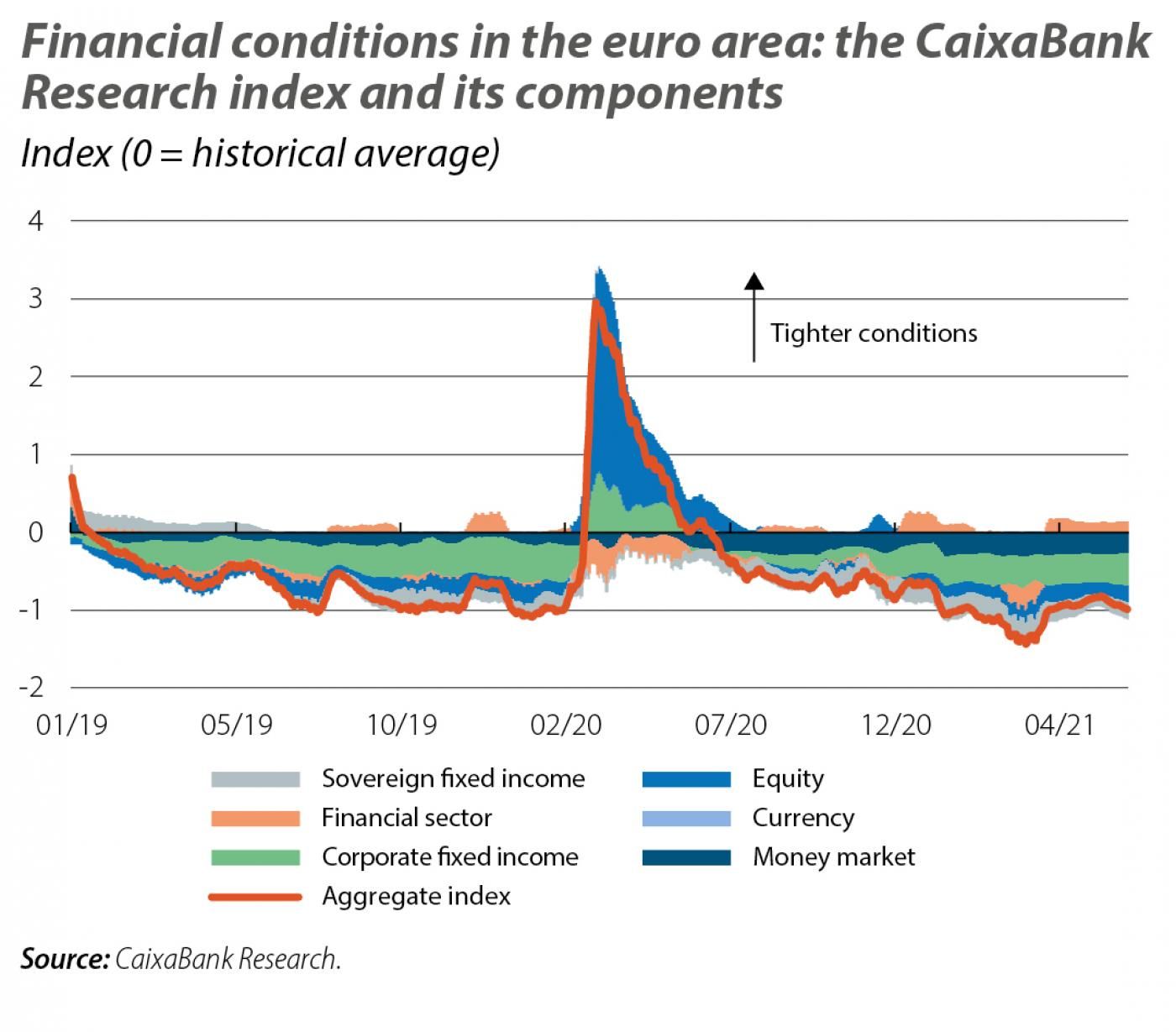 Fluctuations continue in the fixed-income markets

The FOMC’s hawkish message initially generated a rebound in US sovereign long-term interest rates (the yield on the 10-year treasury rose by 8 bps), as well as a cooling of inflation expectations, especially in the medium-term. However, the subsequent statements by several members of the Fed, including President Powell’s in the US House of Representatives pointing to the transitory nature of the inflation rallies and their link to the reopening of the economy, served to calm investors’ spirits and favoured a decline in treasury yields to 1.47%. In the euro area, meanwhile, the ECB’s willingness to maintain the monetary stimulus, coupled with the improvement in the economic data, boosted sovereign debt yields, especially in the case of peripheral debt, resulting in a narrowing of spreads vis-à-vis Germany. In addition, the EU carried out the first debt placements to finance the NGEU programme, which were very well received among investors. 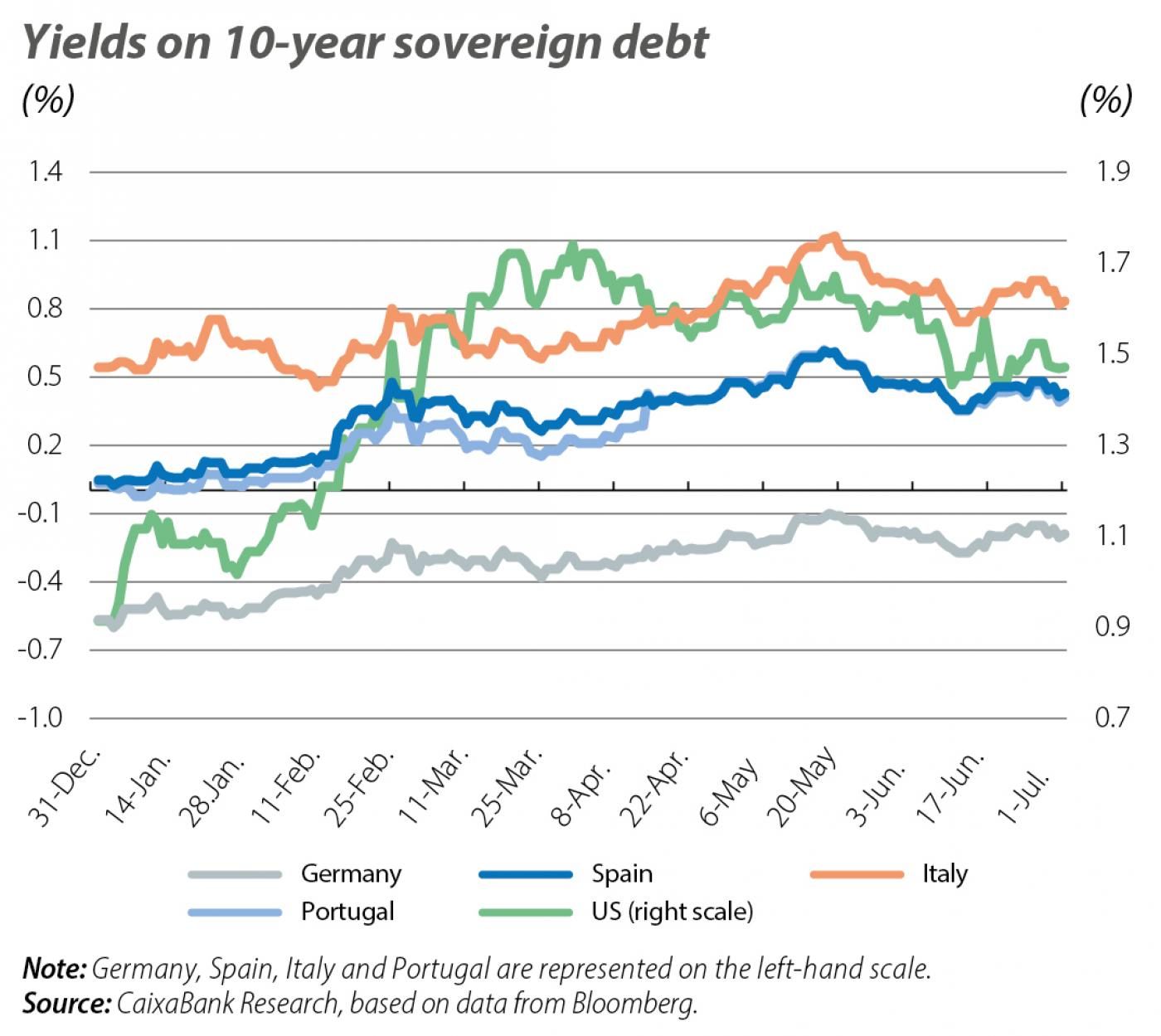 Investor optimism linked to the progress in the economic recovery and the vaccination roll-out prevailed for much of June, despite doubts over inflation and high valuations in some sectors. Overall, equity markets on both sides of the Atlantic performed well, as they have done since the beginning of the year, with gains of over 2% in the S&P 500 and 5% in the Nasdaq, which reached new all-time highs. Gains in the euro area were more modest, partly due to the poorer performance of stock prices in banking and tourism sectors. Emerging-country indices, meanwhile, also registered gains driven by inflows of foreign capital and the recovery of commodities. 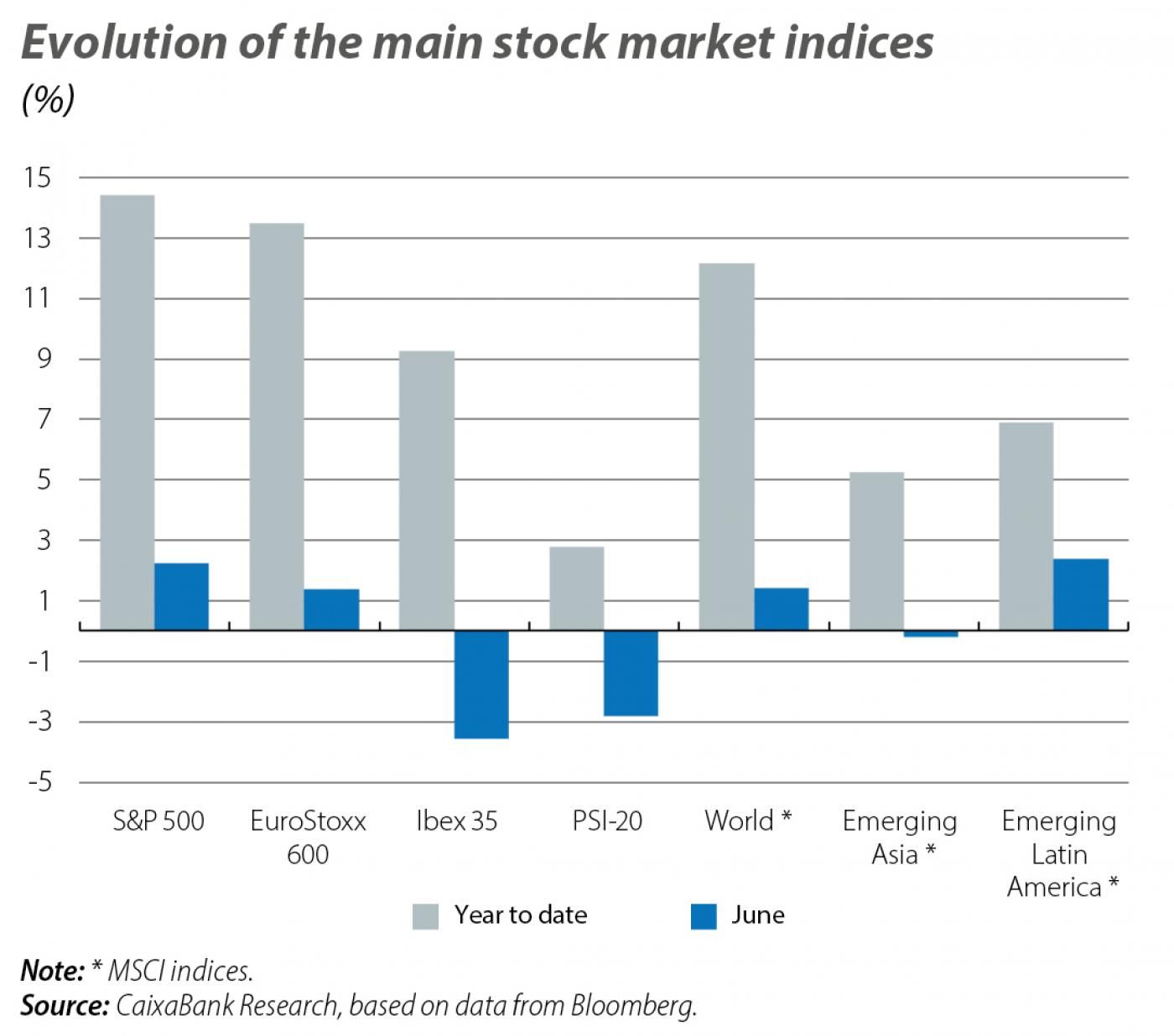 Oil and the dollar on the rise

The prospect of earlier rate hikes by the Fed and the strength of the US business cycle drove the appreciation of the dollar against other currencies for much of the month. The reassuring message from the members of the Fed did not stop the euro from reaching 1.19 dollars, its lowest in two months. Emerging currencies also bore the brunt of the dollar’s strength, registering significant depreciations, with the exception of the Brazilian real which appreciated a 4%. On the other hand, the price of a barrel of Brent rose to 75 dollars, a peak in the last two and a half years. This rally was driven by the economic recovery and occurred in the run-up to the meeting between OPEC and its allies in July, when they could agree on a modest increase in production. 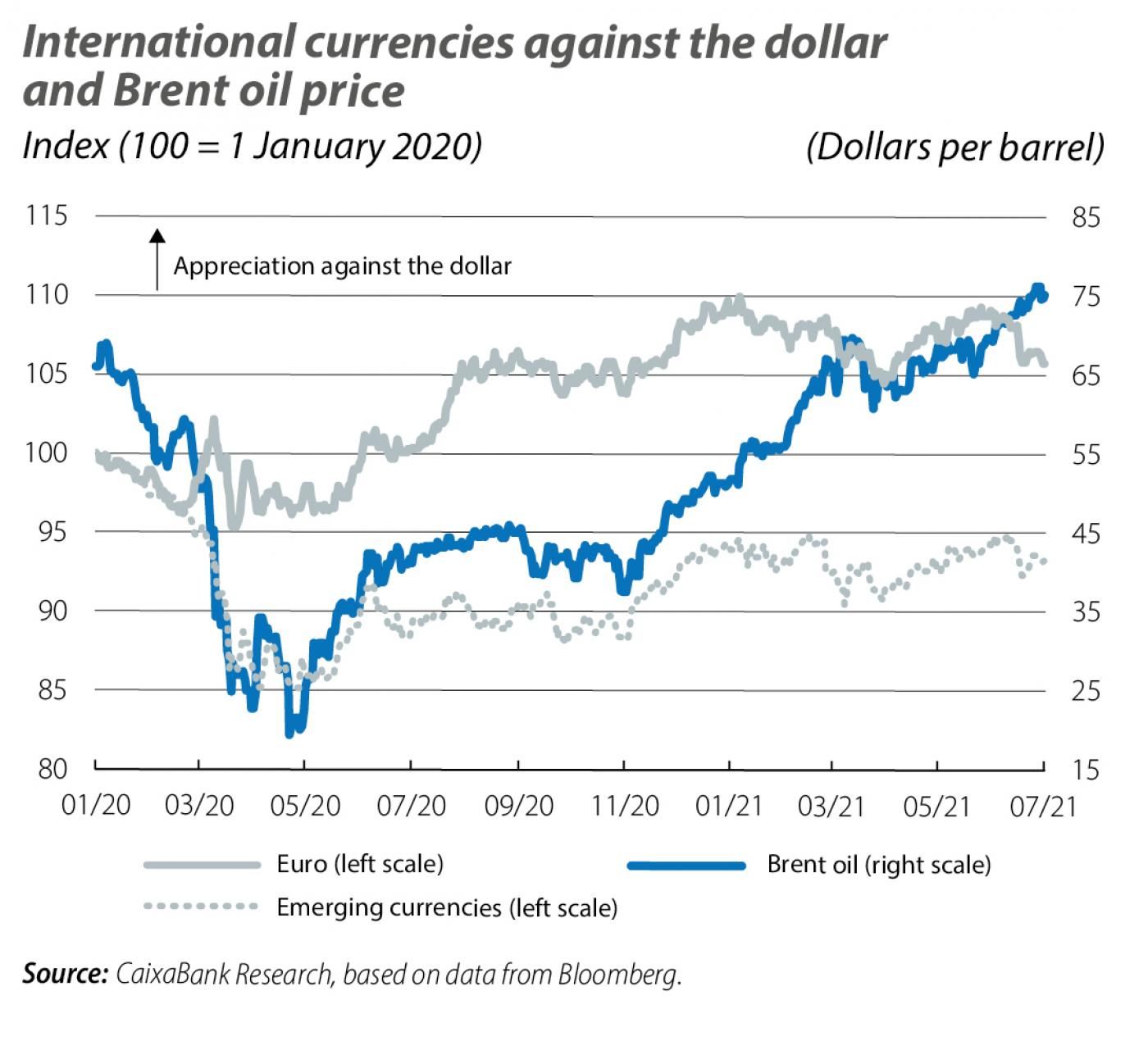