Italian banks have been under huge pressure for some months now, and the latest news coming in is not helping to put those fears to rest. The stress tests carried out by the ECB and the European Banking Authority (EBA) provided even more evidence of the situation Italian banks are in.1 Another indication of the sector’s weakness is the 40% drop so far this year in the share price of the main banks – this is double the figure for all European or Spanish banks.

The main problems of Italian banks stem from low profitability (which affects all European banks) and a high NPL ratio and low coverage levels. Concerns regarding the Italian banking system have been fuelled by different and complex factors. Some of them are longstanding issues, such as high operating costs, a suboptimal corporate governance, and great sensitivity to the economic cycle. Moreover, in the last few quarters, two factors – the environment of low interest rates and increased regulatory pressure – have been added to the structural weaknesses.

In order to dissipate doubts over Italian banks, short-term measures aimed at repairing banks’ balance sheets are required. In the long run, structural measures are also needed. Both represent a challenging task. Regarding the short term, it is worth noting that the portfolio of non-performing loans totals approximately 360 billion euros,2 or some 18% of all loans. The task is therefore huge and the measures that have been proposed so far are not sufficient.

The Italian government is trying to avoid the use of public funds to bail out troubled banks and to prevent small investors from taking losses. In order to assist banks, two mechanisms have been set up: the Atlante fund and the system of state guarantees for the securitisation of bad loans (GACS). The Atlante fund hopes to attract private capital so as to recapitalise banks in difficulty and to acquire portfolios of non-performing loans. However, it has not managed to collect enough capital (4.25 billion euros), and so it has limited capacity. On the other hand the GACS, which has been operating for several months now, aims to encourage the securitisation of non-performing assets so as to take them off bank balance sheets. However, its impact has been modest so far since neither banks nor investors agree on the mechanism to transfer non-performing loans to the special purpose vehicle. Other measures seeking to repair banks’ balance sheets include a recently issued decree law aimed at simplifying bankruptcy procedures and speeding up the recovery of collateral, and the implementation of mechanisms to encourage an increase in provisions.

One of the measures being proposed to ensure the sustainability of Italy’s banks in the long term is a further consolidation of the banking system (there are currently more than 640 banks). This should boost efficiency by generating economies of scale and improving corporate governance. To this end, a recently issued decree law seeks to modernise the governing structure of cooperative and mutual banks, as well as to encourage their consolidation. Moreover, enhanced banking supervision under the ECB’s comprehensive assessment is expected to help make the system more transparent and credible.

In addition to the complicated idiosyncrasies of the Italian banking system, the economic and political context (e.g. the banking situation, the economic weakness, and the lack of political leadership, all closely interrelated) helps explain the situation the sector currently finds itself in. Italian GDP growth has been disappointing for many years now (the average growth rate since 2001 is 0.0%) and the reforms carried out so far have not managed to change this trend.

Given this situation, the outcome of the upcoming referendum on constitutional reform is of the utmost importance. In addition to the possible changes proposed by the reform, the referendum will also help gauge the support that M. Renzi enjoys to continue implementing the programme of reforms. Polls suggest that there is a large number of undecided voters, which is not a cause for optimism.

1. In July’s stress tests, an Italian bank had the worst results of the whole EU: in the adverse scenario, the fully-loaded CET1 capital ratio of the Monte dei Paschi di Siena bank would fall to –2.4%. It has now announced a plan including the sale of a large number of non-performing loans and a capital increase of 5 billion euros. 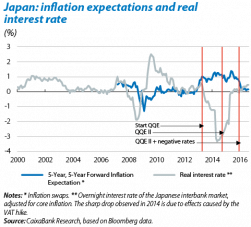