Although the savings rate in the US today is well below pre-pandemic levels, the savings accumulated during 2020 and 2021 due to the mobility restrictions and fiscal stimulus measures could continue to favour consumption in the remainder of 2022 and in 2023. The sharp drop in US consumption, especially in the months of strict mobility restrictions, coupled with the strength of personal incomes, thanks to the massive rounds of fiscal stimulus implemented in 2020 and early 2021, led to an unprecedented increase in the household savings rate: from around 8% before the pandemic to a peak above 30% in the spring of 2020 (see first chart). 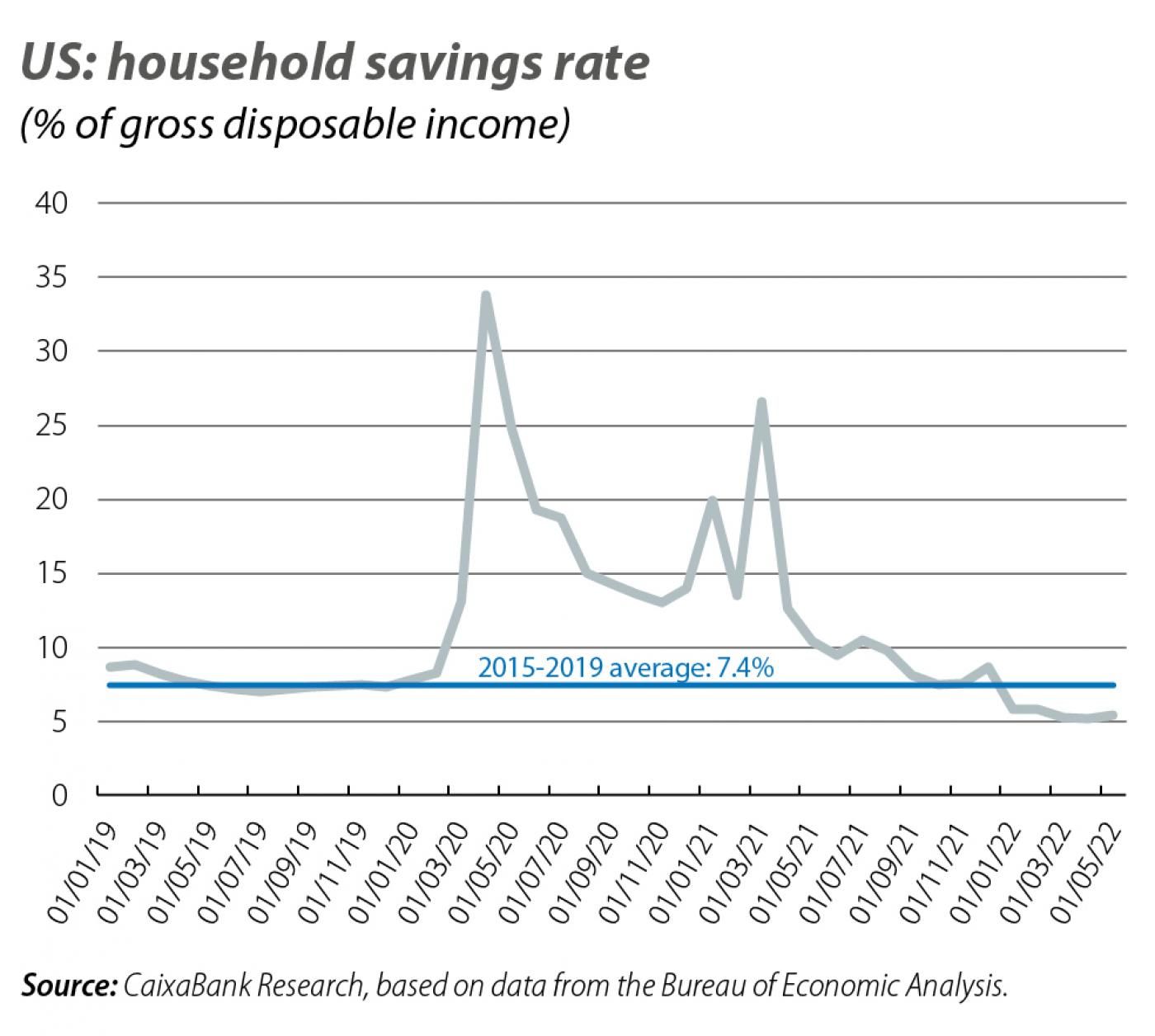 Although the savings rate today is well below pre-pandemic levels (5.4% in May), the fact is that the savings accumulated during 2020 and 2021 could continue to support consumption in the remainder of 2022 and in 2023. But how much are we talking about?

The first step is to estimate what has been referred to as «excess savings». Just to recap, savings is a flow variable and is defined as the difference between households’ gross disposable income and their total expenditure (private consumption, debt service payments and other outlays). In order to estimate the volume of the accumulated savings, we calculated the difference between the levels of disposable income and expenditure observed with those that would have occurred in the absence of the pandemic, that is, the counterfactual levels if the average growth rate observed in the five years prior to the pandemic had been maintained (see second chart). 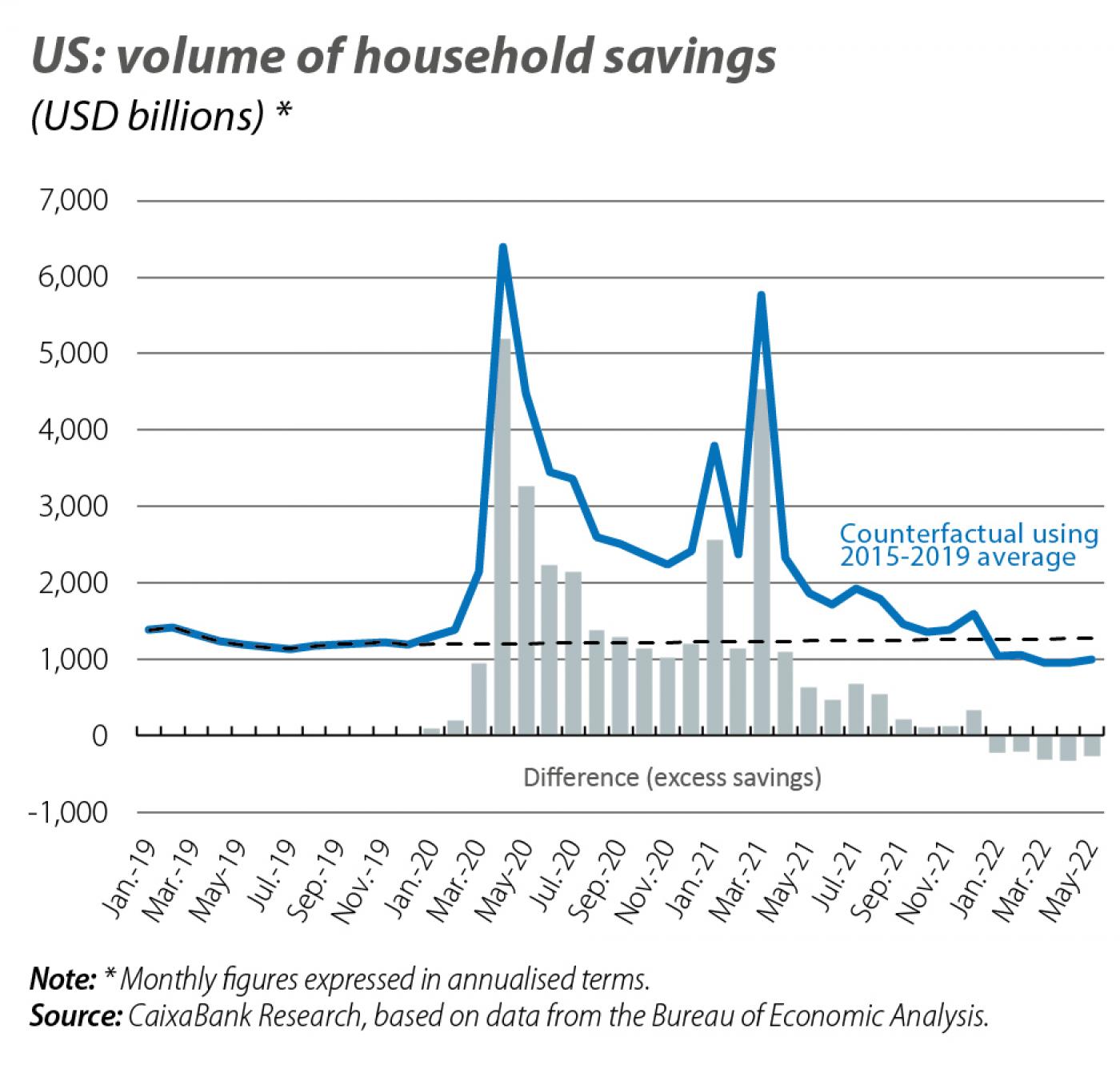 This quantification shows that households amassed approximately 2.5 trillion dollars in excess savings between Q1 2020 and Q3 2021 (12% of GDP). This is a very large amount and clearly more than in other advanced economies, where substantial public-sector subsidies were also deployed to mitigate the impact of the pandemic on households (though less generous than in the US). As an example, in the euro area as a whole, these excess savings are estimated to amount to just over 0.8 trillion euros (7% of GDP), while in the case of Spain it could be about 85 billion euros (also around 7% of GDP).1

US households, however, have already used some of these excess savings to finance higher levels of consumption since the beginning of 2022, in response to the rise in inflation. Specifically, according to our estimates, the portion already used would amount to some 100 billion dollars, or just under 5% of what had previously been accumulated. If this trend continues, it would take four to five years for households to spend all of their excess accumulated savings, meaning a total of 500 billion per year (around 2.4% of GDP) during 2022 and 2023.

How much could households continue to spendin the coming quarters?

However, the relationship between consumption and the accumulated savings is neither constant nor directly proportional. A number of factors influence this relationship, so we must analyse them in order to answer the question of how much support the pent-up savings could really provide to consumption over the coming quarters.

The first factor to consider is how households have distributed these savings among the various available assets, since their differing degrees of liquidity point towards a different short-term consumption capacity. In this regard, although flows to equities and mutual funds, as well as new mortgages, were above their respective most recent historical averages, the bulk of the excess savings was allocated to deposits and cash – highly liquid assets (see third chart). This distribution ought to favour a willingness to spend those savings. However, this does not seem to be happening. 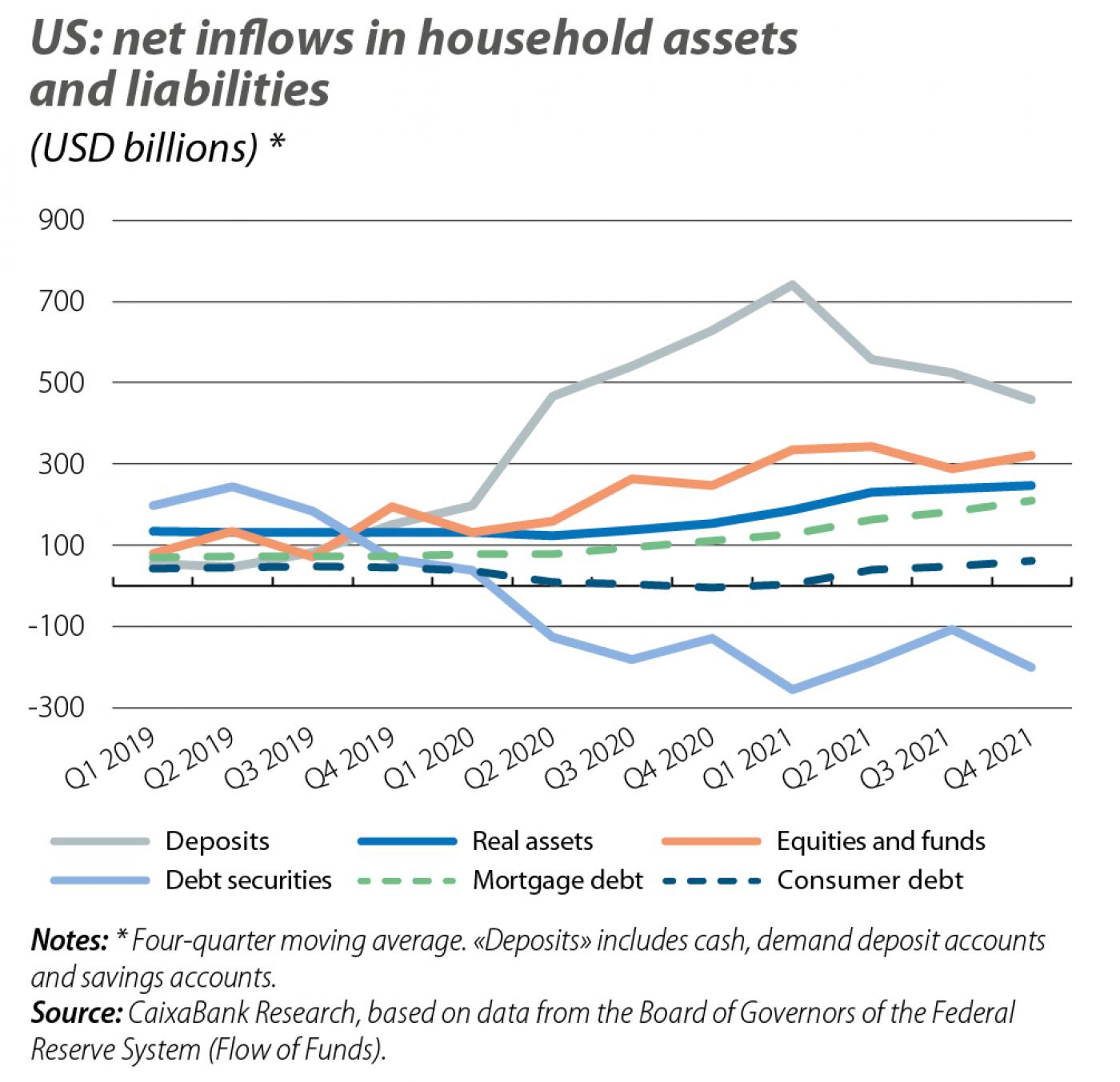 A second aspect to consider is the distribution of the excess savings among households according to their level of wealth, since lower-income households have a high marginal propensity to consume, while the opposite is true for higher-income households.2 Thus, at this point, we would need to estimate the current distribution of the excess savings and the marginal propensities to consume according to household income, in both cases.

With regards to the distribution, various studies show that the highest-income US households (the top 20%)3 may have accounted for between 40% and 65% of the excess savings. Given their lower marginal propensity to consume, this would provide a smaller boost to consumption than if the distribution had been more proportional across all households. As for the propensities to consume, various studies provide very different figures. While a 2019 analysis by the Boston Federal Reserve estimated them to be [0.218; 0.166; 0.002; 0.002; 0.015], from the lowest income percentiles to the highest; another conducted by Penn Wharton in 2021 placed them in a much higher range, considering the particularities surrounding the current situation marked by the pandemic: [0.55; 0.40; 0.22; 0.13; 0.12].

If we consider these latter propensities, as they are more aligned with the current situation, and a distribution of the savings in line with the one mentioned above, we estimate that households could spend around 525 billion dollars (in nominal terms), i.e. 20% of the total accumulated extra savings. In this regard, and given that 100 billion dollars have already been spent, there would be a further boost of 425 billion still to materialise in the coming quarters (around 1.8% in GDP terms).

However, this figure is also dependent on a third element, namely confidence. The willingness of households to draw on their pent-up savings will also depend on their expectations regarding their future economic and financial situation. In this regard, and according to the survey by the University of Michigan, the economic outlook for consumers deteriorated in June to its lowest level since 1980, and this could lead to greater caution when it comes to using this financial buffer, at least in the short term.

On balance, and according to our analysis, the pent-up savings could represent additional consumption of around 400 million dollars (in real terms) over the coming year and a half, starting from a level of total accumulated savings equivalent to 12% of GDP following the pandemic. Combined with the strength of the labour market, this support factor (which represents around 1.5% of GDP) will, in our view, allow US households to largely circumvent the negative effects of the current high inflation and the financial stress triggered by the Federal Reserve’s rapid withdrawal of the monetary stimulus.

That said, the existence of this savings buffer does not mean that the US economy cannot experience a sharp slowdown. Indeed, we can expect the tension in financial conditions and the fall in stock market indices (20% so far this year) to have a negative impact on consumption in the coming quarters.4 However, the accumulated buffer, together with the recovery of the labour market and robust household finances, should serve to avoid a deep and lasting cooling of economic activity. 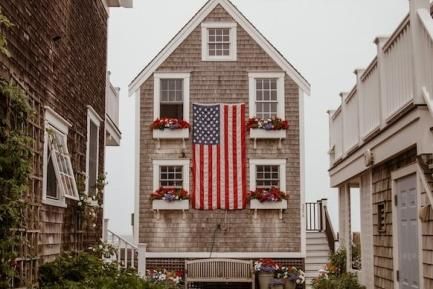 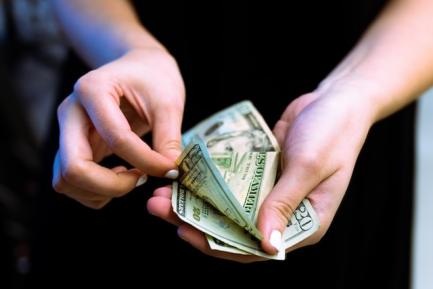