US housing: light at the end of the tunnel

If we had to suggest a starting point of the Great Recession, few would doubt that it all began in the US real estate sector with the subprime mortgage crisis. Paradoxically, when many economies are still suffering the effects of the crisis, and with countries such as Spain and Italy continuing to decline in 2013, US housing is now on the road to recovery. This was already being said in 2010. But the green shoots of housing at that time turned out to be deceptive. However, this time is different. This box will attempt to show why, this time, the real estate sector's recovery, although gradual and modest, will be more sustainable and longer lasting than the last one.

The background: a very low starting point and green shoots that withered

The US housing crisis was unprecedented. Since the 1960s, when the most significant statistics started to be gathered, there hadn't been any similar drop, not even close. According to the Case-Shiller index, existing home prices dropped by 31.8%, between April 2006 and April 2009 and by 35.9% in real terms. Similarly, investment in construction fell by 57.5% from the beginning of 2006 to the beginning of 2010, deducting 3.5 percentage points from total GDP. However, the most disastrous consequence was job losses. The construction sector lost 2.25 million jobs in the crisis, 25.6% of those lost in the economy as a whole. Moreover, construction employment is still anchored at rock bottom, without taking part in the slight recovery occurring in general.

With the recession, a vicious circle was set up between falling house prices and employment. Rising unemployment led to a slowdown in the creation of households and an increase in doubtful loans which ended up in foreclosures due to default. Fewer households and more foreclosed homes swelled the number of unoccupied houses, creating an oversupply. This stopped prices from recovering and left the sector almost paralyzed. The persistence of low property prices hindered household consumption via the wealth effect and prevented many mortgages from being refinanced at a lower interest rate, as they were in a situation of negative equity.

State aid for house purchases and the payment of credits brought a brief, moderate recovery in prices and sales that became known as the «green shoots». The Case-Shiller price index rose by 4.7% between April 2009 and May 2010 and property sales saw a sharp upswing in November 2009, coinciding with the end of state aid, which had pushed them up to almost pre-crisis levels. But investment in construction was still stuck at rock bottom, oversupply persisted and the «green shoots» withered. Prices embarked on a gradual but uninterrupted downward slide that lasted until February 2012, with the Case-Shiller index losing 42.1% compared with its peak of April 2006, in real terms.

The recovery in the real estate sector arrived in 2012. Improvement is gradual and not very intense but it's sustained. The Case-Shiller index accumulated growth of 3.9% between February and July. Sales of existing homes, which account for 90% of the total, have increased by 10.2% since the start of the year and, unlike the time of the «green shoots», supply is also moving. New homes started in August were 29.1% above the level for the same period a year ago and developer sentiment is more optimistic than a few months ago. It must be said, however, that growth rates are still moderate and the starting point is low. For example, residential investment for the second quarter of 2012 reached 2.4% of the economy as a whole, higher than the minimum rate of 2.2% in the third quarter of 2011 but far from the average of 4.1% in the 1990s. However, even with this modest intensity, cumulative residential investment has risen by 12.4% since the start of 2011 and has been contributing positively since then to growth in the economy. The key question is whether this recovery will continue.

A recovery that will continue?

The answer is that the recovery in US housing is very likely to continue, providing the economy doesn't go through a double dip recession. The reasons for this continuation are the improved balance between supply and demand. The real obstacle to the sector's recovery in this crisis has always been the persistent oversupply of property. But the evidence points to this oversupply diminishing in 2012 so far. The best indicator of this is the reduction in the number of months it takes to sell a property, the result of dividing the supply of available homes for sale by the number of homes sold in one month. In August 2012, it took 6 months to sell a property, far below the figure of 10 months required throughout 2011 and the 16.6 months needed in July 2010, when the crisis took housing to its lowest point. The situation should continue to improve until it reaches 4.5 months on average, as in the period 1999-2005.

What is the reason for this fall in oversupply? Firstly, it should be noted that, in this crisis, construction has adjusted more rapidly than in previous episodes. The consequence is that, since December 2008, somewhat fewer than half the homes were started than would be the normal figure without bubbles or crisis. Secondly, the number of foreclosures has dropped, reducing one source of homes for sale. A third factor is that many of the homes on sale have reconverted to rented property. Fourthly, the sustained increase in sales has also been helped by more reasonable prices. The ratio of existing home prices (according to the index of the National Association of Realtors) to mean household income is back at its normal levels. This relationship had remained practically constant between 1980 and 2000. The bubble caused real estate to appreciate by 40% compared with income but the constant falls have completed the return journey and property is once again affordable for many families. Demographic trends should also help this drop in oversupply to continue. The formation of many young households has been delayed due to the economic crisis. We can suppose that more households will be formed in the coming years by way of compensation, with the consequent rise in demand for housing.

The main scenario is therefore one of a gradual but sustained recovery. There are two risks for this scenario, however. Firstly, a double dip recession in the United States could increase doubtful loans and postpone the formation of households. The second risk is the hidden fund of properties owned by people who, discouraged by low prices, had withdrawn the properties they had on sale from the market. In any case, the imbalances that were damaging the real estate market have significantly diminished. It can therefore be said that the real estate market is no longer so much of a weakness and, should this recovery continue, it would gradually become a strength for the US economy.

This box was prepared by Jordi Singla 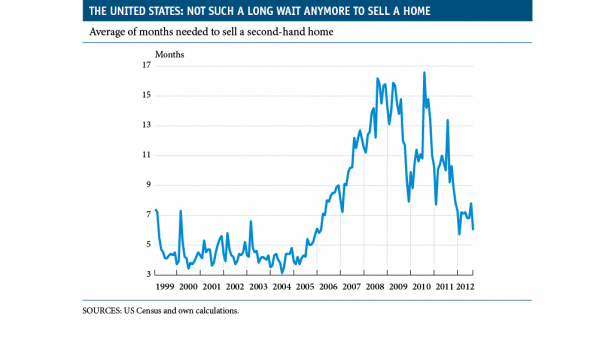 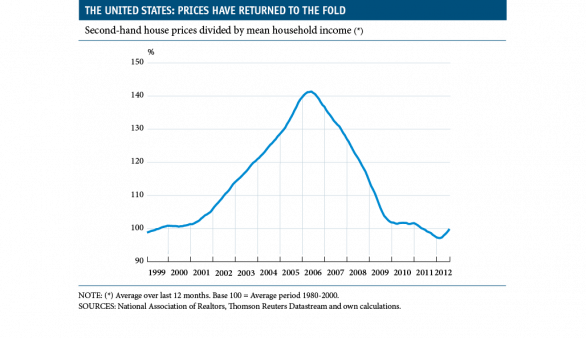