In 2021, supply problems have dominated the financial headlines. One of the most prominent problems has been the lack of chips, or semiconductors, which has caused many headaches across a range of sectors, including the automotive industry that is so key to European industry. In the face of increased structural demand for technological goods, is the supply ready for it? 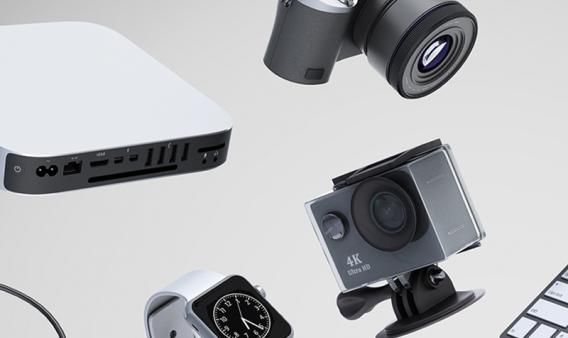 In the previous articles of this same Dossier, we have analysed the high demand for technological goods at the height of the pandemic, as well as various factors which could favour the persistence of this trend in the medium term. However, in the face of increased structural demand for technological goods, is the supply ready for it? This is precisely what we ask ourselves in this final article, in which we focus on the case of chips.

Supply: the efforts of the last two years... insufficient

In 2021, supply problems (or bottlenecks) have dominated the financial headlines. One of the most prominent problems has been the lack of chips (or semiconductors), which has caused many headaches across a range of sectors, including the automotive industry that is so key to European industry.

However, producers of semiconductors and other technological goods have not rested on their laurels in the face of the rise in demand since 2020 and the evident shortage since 2021. Indeed, they have done quite the opposite. For instance, Taiwan, one of the world’s leading chip producers, has greatly increased its production in 2020 and 2021: its chip exports grew by an average annual rate of 20%, compared to an annual rate of 10% in the previous 20 years (see first chart).1 In the same vein, Chinese exports of high-tech goods also grew in the last two years at well above the average rate of the previous 10 years (16.4% on average in 2020-2021, compared to 4.6% on average in the period 2010-2019).2 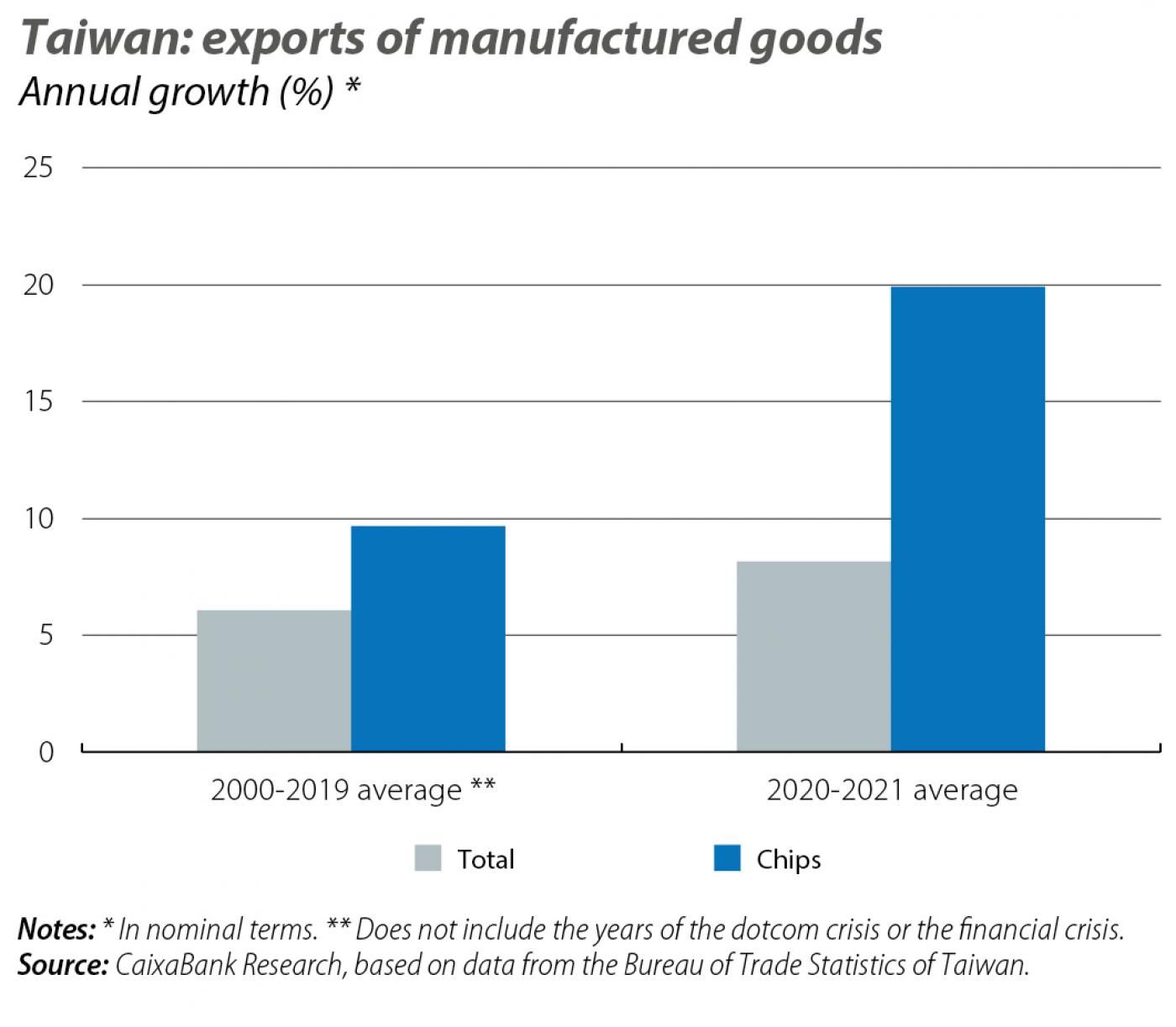 Despite these efforts by the main producing economies to boost the supply of technological goods, it has proven insufficient to close the gap with the buoyant demand. In addition, transport and logistics problems have arisen in the face of high levels of freight traffic in this pandemic environment.

Among many other aspects, the pandemic has highlighted the need to accelerate economies’ digital transformation. Those countries that are more digitalised and technologically advanced have managed to better weather the current economic and health crisis. In this regard, most major economies have already put forward plans to accelerate this digital change. The EU is no exception, and as we discussed in a recent article,3 much of the NGEU funds will precisely go towards this digital transition in Europe.

Among the various elements aimed at driving digital change, the European Chips Act will play a key role. This act aims to alleviate the problem of semiconductor scarcity in the European region (as a key input in technological goods), as well as foreign dependence for their supply. «Technological sovereignty» and «European strategic autonomy» are two of the most frequently heard slogans when discussing industrial and trade policy in Europe. In the case of chips, it should be mentioned that 75% of their production is concentrated in East Asia, with Taiwan and South Korea being the main producers, especially in the case of the most sophisticated semiconductors (see second chart). 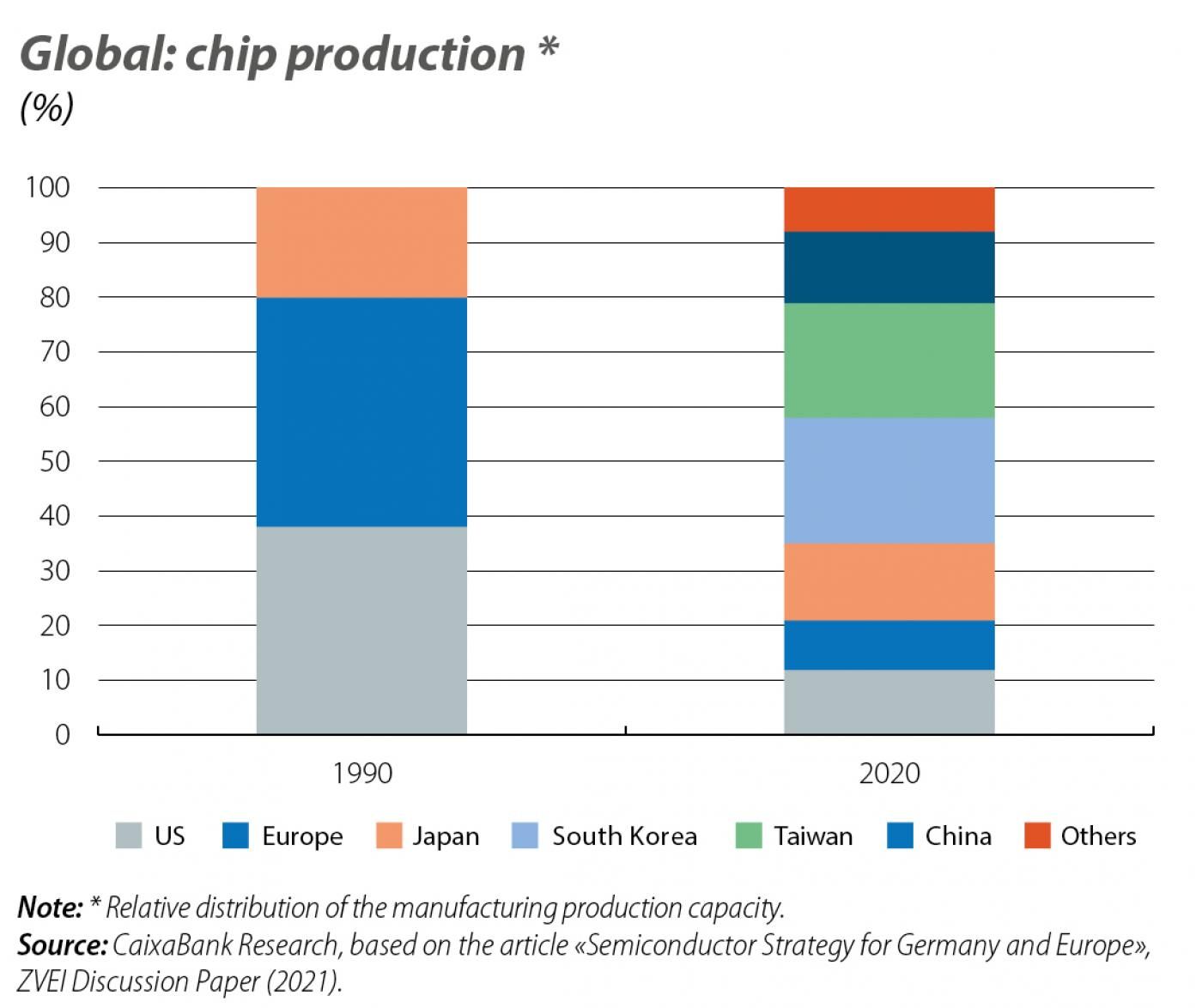 In this regard, in 2022 the EU will present a proposal for this semiconductors act. With a planned investment of between 20 and 30 billion euros up to 2030, it will double Europe’s share of the global chip production (from the current 9% up to 20%), especially in those more sophisticated variants. These are ambitious goals to achieve greater self-sufficiency and sophistication, which are shared by many other countries. In the US, we have the CHIPS for America Act and the FABS Act, which also aim to increase the US’ productive capacity and have a planned investment of 50 billion dollars over five years (around 44 billion euros); China has supported the semiconductor industry with investments of 180 billion dollars (some 160 billion euros) since 2015 and aims to produce 80% of its domestic chip needs by 2030, and even South Korea has announced an investment of 400 billion dollars (some 355 billion euros) up to 2030.

In the face of such a deployment of resources, a considerable increase in the global chip production capacity seems assured. But this will not be in the short term. Building a semiconductor manufacturing plant involves a multi-billion-dollar investment (around 20 billion dollars for the most sophisticated variants) and it typically takes around two years (if not longer) for it to become operational. On the other hand, there are various question marks regarding the chip policy that the EU seems intent on pursuing. Firstly, the planned investments within the Union are modest if we consider that South Korea, a leader in production alongside Taiwan, aims to invest up to 10 times more over the same period; or that China has invested up to five times more in the last six years.

Secondly, Europe has focused on the most complex types of chips, which require not only greater economic investment but also a know-how that can only be gained from experience, such as that which countries like South Korea or Taiwan have.4 In addition, the automotive sector, one of the European sectors that has been hardest hit by this semiconductor supply crisis, does not have a particularly high demand for these more complex types of chips. Perhaps a production strategy more coherent with the region’s domestic needs could yield more beneficial results in terms of providing some degree of autonomy in the medium term.5 And we say «some degree of autonomy» since, in such a technologically advanced sector which uses a wide range of commodities, involves highly sophisticated machinery and has constantly shifting specification, one cannot pretend to be detached from global supply chains. Decoupling from these global chains in chip production would result in their prices rising by between 35% to 65%, according to estimates by the Boston Consulting Group.6

Finally, in a world in which technology will continue to advance at a breakneck pace, and in which geopolitical tensions continue to escalate, empowering a workforce that is technologically prepared, as well as collaborating with regions that are at the cutting edge of technology and which play a central role in geopolitical terms, such as the US, are strategies that our region must also consider.