The positive performance of the Portuguese foreign sector in 2018

In 2017, Portugal’s current account balance recorded a surplus of 0.5% of GDP (the fifth consecutive year posting a surplus). By components, while there remained a deficit in the goods and income balances, exports of services exceeded even the most optimistic of expectations. This was primarily thanks to the strong figures for tourism and it enabled the surplus in the balance of services to offset the less positive figures registered by the rest of the components.

Recent dynamics in the foreign sector

With regards to 2018, the data available up to April show a positive trend in exports of both goods and services, as well as remittances from emigrants.

Firstly, within the balance of goods, there has been an increase in the trade deficit, but it must be attributed to the strong growth of imports (10.5%). This is the result of higher oil prices (which have led to a deterioration in the trade deficit in energy), as well as the strength of domestic demand and higher imports of investment goods. Furthermore, exports have grown significantly (8.0%), which is particularly noteworthy given the marked appreciation of the euro over the course of 2017. Sales of cars and their components have enjoyed particularly encouraging growth, while the traditional industries (oil, wine and beverages, plastics and cork) have also performed well.

The surplus in the balance of services, meanwhile, has continued to break records. As of April 2018, the surplus had increased by 2.3 billion euros (cumulative 12-month figure) compared to the same period in 2017. This highlights its upward trend, supported by very positive figures in the transportation and tourism sectors. Tourism particularly deserves a special mention, with a weighting of 70% in the surplus of the balance of services. Tourist services have steadily gained prominence in the national economy (they are expected to account for 7.8% of GDP in 2018) and in April 2018, revenue from the sector accounted for 18.0% of total exports (12-month cumulative figure).

In a favourable foreign environment, we expect both global and Euro-area exports of goods and services to continue to perform well. In this regard, in 2018 the influx of tourists will most likely reach new record figures once again, which will reinforce the current account surplus.

All in all, the current environment is not without risks. On the positive side, remittances from emigrants or transfers received from the EU could end up being better than expected. On the negative side, there could be a deterioration in international investor sentiment in an environment of geopolitical and trade tensions; there could be a rally or volatility in the price of oil; and, finally, there is the possibility of a sudden interest rate hike (which could occur both due to fears of an increase in protectionism at the global level and due to a reaction to the withdrawal of monetary stimulus by the major central banks). It is also worth noting that the proportion of public debt which is held by non-residents has increased, which will put some pressure on the balance of incomes. 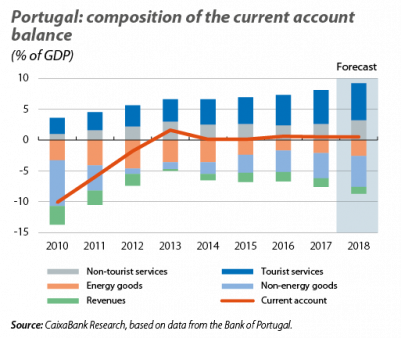