The resurgence of IPOs

The cold that paralysed western stock markets during the years of crisis is continuing to lessen. The first symptoms of improvement could be seen in share prices, which have been on an upward trend for some time now (highly pronounced in the USA and moderate in Europe). A reactivation could then be observed in other vital signs of the stock market. One of the most notable signs relates to the number of companies deciding to take the step of joining the market. On the two sides of the Atlantic, both demand and supply factors are coming together to boost initial public offerings or IPOs. On the one hand, the improvement in economic growth prospects and the relatively good performance of corporate earnings, together with rock-bottom interest rates, have stimulated investors' appetite for risk. This is crucial for those companies starting out in stock markets, which are often small and not very well-known and therefore perceived as investments with a higher risk. On the other hand, attracted by rising share prices, companies themselves can find stock markets an appealing alternative to increase their capital, just at a time when solvency is highly appreciated and access to external financing is not as easy as it used to be.

The USA took the lead over Europe in IPOs and has maintained it. The number of operations and their value has been growing for some time and has now reached standard figures. According to Bloomberg's data, during the first three months of this year 130 firms have gone public, recording a total of almost 11 billion dollars in the subscription period, a figure close to the record achieved in the same period in 2007. At a sector level, particularly significant are IPOs among biotechnology firms, followed by energy companies and those from the financial sector. Many analysts expect the rate of IPOs in this country to achieve levels not seen since 2000, a date when the stock market reached its peak prior to the financial crisis.

The improvement is more incipient in Europe but has started strongly. According to PwC's figures, IPOs were weak until mid-2013 but the last quarter of last year witnessed a dramatic rise, bringing it close to the levels of 2007 Q4, i.e. before the crisis. The partial figures from 2014 suggest that this performance is continuing.

Spain is lagging behind somewhat in this process but looks like it will soon pick up. In 2012, 2013 and so far in 2014, operations have been limited to a handful of small firms on the Alternative Stock Market (MAB in Spanish) and a few real estate investment trusts (socimis). However, there are several firms that are likely to extend Spain's stock market universe very soon. Recently, the Spanish Securities and Investments Board (CNMV) itself has been optimistic, announcing that it expects to end the first third of the year with five new companies on the Spanish stock market although it has not specified which ones. All the evidence suggests that these companies will be varied. For example, in terms of the business sectors. And also in terms of their reasons: to enhance their businesses, culminate privatisation processes and/or meet their borrowing needs. Among those companies with the most advanced plans to go public are Applus, Odigeo, Edreams, Globalia, Loterías y Apuestas del Estado and Aena. 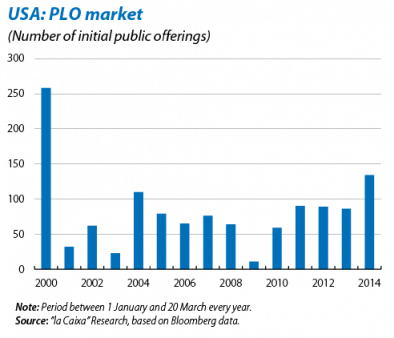 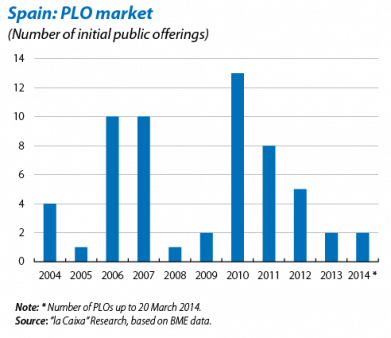